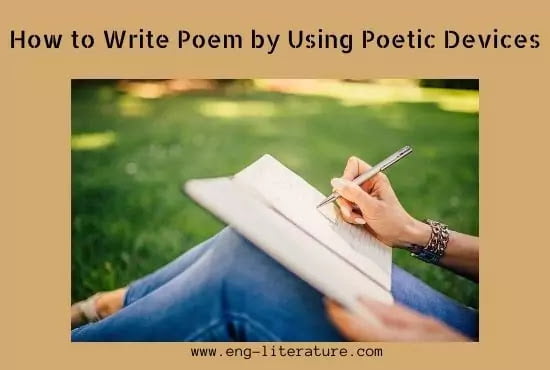 The Art of Writing Poetry

To be poetic is something very simple but to be a poet is something not so easy. We all think, we dream, we vision, and we have a brain full of lovely ideas about nature or may be our dream girl we aspire to have. But there are hardly a few who can transmute their feelings into a good piece of poetry.

Don’t be panic thinking that to write a poem is a very tough task. In this article I am not stating the tips of how to write poem, instead I am showing you some poetic devices which are really pretty essential for mastering the art of how to write poetry.

I. Importance of Rhetoric

Rhetoric teaches one how to master a felicitous style by which one can write or speak freely and forcefully. Its fundamental business is to let a writer or speaker know the art of good composition. Different figurative languages have the common aim to make writing poetry in English more impressive, effective and graceful.

Quiller Couch has rightly observed in his The Art of Writing, ‘essentially style resembles good manners’. A good poet must know what to write and how to write-what words are to choose to explain his thoughts and how to make these words effectual, purposive and good.

What are the essential qualities of a happy style? These qualities are six : (i) Purity, (ii) Perspicuity, Clearness, or Clarity, (iii) Simplicity, (iv) Brevity, (v) Impressiveness and (vi) Picturesqueness.

There is a fine saying of Confucious, celebrated Chinese thinker, “If language is not correct, then what is said is nor what is meant: if what is said is not what is correct means, then what ought to be done remains undone.” Correctness is certainly an essential quality of every composition, and can alone make it worth considering.

Purity means the use of the correct grammatical form. The author or speaker is to retain the purity of his composition by observing carefully the existing rules of grammar. Without purity, no style can achieve real grace.

Correctness, however, does not mean any blind attachment to some bygone law. English is a flexible language, and the grammar of this language has never been enchained by rigid formulary.

The fundamental business of any composition are two : (a) the clarity of thought and (b) the simplicity of expression. The greatness of the art of writing lies in the fusion of these two things.

Perspicuity or clearness is a great virtue, and avoids the possibility of confounding a statement with anything else. It makes one’s composition free from obscurity, vagueness, or ambiguity. As a matter of fact, it is the most essential mark of a good composition.

Many things contribute to the attainment of perspicuity.

In the first place, the poet’s thought or idea must be clear. To achieve clearness and exactness in style, the poet must have a clear conception of what he is going to write or state.

In the second place, using proper words in proper places.

In the third place, proper attention is to be given to stanza. Different thoughts, views, or ideas should be treated in separate stanza.

In the fourth place, ambiguous words or expressions are to be avoided as far as possible.

Lastly, the use of some figures of speech is often conducive to clearness and precision. The figures, founded on similarity and contrast, may be effectively employed to make a statement clear and pointed.

Simplicity consists in the use of plain and easy words. It is a quality, that makes a statement intelligible, without efforts. Simplicity does away with abstruseness, and presents an idea or thing in an unambiguous manner.

To achieve simplicity, difficult words or expressions are to be avoided first.

‘Brevity’, it has been nicely said, ‘is the soul of wit” (Shakespeare) It is a quality that blesses a poet with the power of expressing his thoughts and ideas, clearly and precisely. And the quality to write or say briefly is no mean virtue.

But it is a hard task for a poet to achieve brevity in his verse.

Brevity mainly requires a two-fold function–the selection of the right words and the avoidance of different forms of diffuseness.

It is further to be noted here that brevity can be achieved by the just employment of some figures of speech, like the metaphor, the epigram, the transferred epithet, and so on.

Impressiveness consists in presenting a statement or fact in a forceful and attractive way. It produces an effect, which is both lively and emphatic. In fact, it enhances the quality of poetry and secures a strong and lasting hold over the memory of even an unsympathetic reader.

Impressiveness may be achieved in various ways.

First, the words used are to be endowed with intensity or emphasis. The repetition of the same words or phrases is an effective method in this respect

Second, the whole language may be made impressive also by inverting the usual order of words. The use of the figure hyperbaton well serves the purpose here.

Third, the impressiveness of any composition may be heightened by the use of the figures of speech, founded on similarity and contrast.

Fourth, impressiveness can be achieved by giving the shock of surprise and by emotional expressions. The use of such figures as the epigram and the apostrophe may be worth-mentioning here.

Lastly, one more powerful aid to impressiveness is the employment of the figures of speech, like the hyperbole, the personification, the metonymy, the synecdoche, the transferred epithet, the asyndeton, the polysyndeton, and so on,

Picturesqueness is a quality which pictures things as they appear actually. The scenic charm of a place, or the detail of an incident is presented with a graphic reality by a writer or speaker by means of this quality of his composition

The effect of picturesqueness can be attained by the following means

In the second place, the felicitous employment of the figure of speech, vision, produces the picturesque effect in any poetry.

In the third place, under the figure of speech, based on association (synecdoche), the name of the material put for the thing made, has a picturesque effect.

In the fourth place, the figure antonomasia (a class of the synecdoche) also aids to the pictorial effect of a writing or speech.

In the fifth place, the reproduction of circumstantial details greatly conduces to the quality of picturesqueness.

There are few poetic devices which are frequently used by poets while writing a piece of poetry. These are –

Figure of Speech in Poetry:

Our death is but a sleep and forgetting.

To err is human, to forgive divine.

To know, to esteem, to love – and then to part.

Move him to the sun.

Uneasy lies the head (i.e. king) that wears a crown.

O death where is thy string

Ten thousand I saw at a glance

Tossing their heads in spritely dance.

A fair field full of folk.

The woods are lovely dark and deep.

Grow old along with me!

On the contrary, there are many poets, who use, at random, certain irregular poetic devices. These irregular devices go against the accepted rules of good composition of poetry.

Some such irregular literary devices are treated below:

In the first place, there is the solecism, which is a gross deviation from the syntactical rules or the idiom of a language: When the writer or speaker does not follow the correct form of grammar and idiom, he violates the principle of purity and gives rise to what is called the solecism.

Purity involves the use of classic or good words, and offences against this rule are called barbarism. Barbarisms include Archaism, Neologism, Provincialism and Vulgarism or Slang.

The archaism means the use of obsolete words. These words were once current, but they have now been ousted. Such obsolete words are – whilom, trow, albeit, yelept. natheless, etc.

The neologism consists in the use of words newly coined. These words are not common in the language, and look quite strange. A few examples of the neologism are aliveness (from alive), literatesque (formed in the fashion of picturesque), burglarize (from burglar), Taxied (from taxi), and so on.

The provincialism means the use of words peculiar to the dialect or the form of speaking of a particular locality, district, or province.

Tautology, as defined by Bain, ‘means employing, in the same grammatical situation, two or more words or phrases for one and the same meaning.

inaudible and noiseless, beg and petition, plain and evident, joy and delight, equally and as much, and so on.

This refers to the use of superfluous words, not in the same grammatical situation. Thus the example, ‘They returned back again to the “back’, ‘again’, ‘same’, ‘from’. same city from whence they had come,’ contains many redundant words as

It consists in expressing an idea or thing in a round-about way.

He left behind him a name not to be extinguished but with the whole world.

This is a French term, signifying ‘a stereo-typed plate’. It implies an expression or term that is made hackneyed by constant uses in some verse. In fact, it is a trite, an overused expression, that is turned monotonous, lifeless. Such cliches are quite common in the poetic diction of mediocre poets.

This is actually the license allowed in poetry, to deviate from the normal code or order of the grammatical rules in structure or correctness, or even in the proper use of diction, rhyme, or in pronunciation to meet poetic necessities. This is, in fact, a privilege, permissible in poetry for the convenience of a poetical composition.

A conceit is a sort of comparison. But in this comparison, there is more of incongruity than of likeness. Ingenuity, rather than propriety is here more striking. In fact, the use of a conceit has the effect of producing a profoundly intellectual stir by instituting a metaphysical poetry. contrast between two utterly unlike things. Such conceits are quite common in

IV. Melody and Harmony in Poetry

In connection with good composition of poetry, a few words are to be said about melody and harmony.

The melody of any composition lies in the general agreeableness of its sound to the ear. It produces a melodious flow that strikes music into an ear.

Harmony also produces a pleasing effect by a sonorous display of sounds. It graces the style of one’s composition.

Both melody and harmony greatly heighten the effect of any poetry.

Please don’t forget to drop your view regarding this article. Thank you.