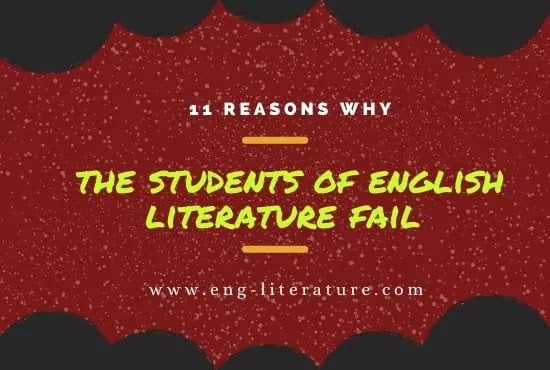 Within my short span of teaching career I have made a small survey on the majority of beginners and students of English Literature entirely relying upon my own assumption. On entering into the degree course, raked up by emotion and excitement they used to believe that they are going to win the world by storm as they are pursuing such a ROYAL subject of international repute. As if they speak English, eat English, dream English, and live English and what’s not. Yes they move by fashion rather than passion. They don’t understand the basic difference between language and literature.

After attending few lectures their spur and zeal of learning English Literature is gradually getting slow and fading away. A few turn their wheel on the reverse direction, while others drive their car by merely pushing forward in a limping manner. That’s the reason why they have to kiss the dust at last.

I have noticed so many students without text books while I was teaching on topic. And also I have seen a good number of students took books from library for show and after several days returned those without turning a single page.

Without a least trace of doubt that the steady and serious minded students guided by love and passion for English literature succeed in securing handy marks at the end and thus they win the race.

I have seen in many groups that boys and girls often complaint about their supply in B.A or M.A English. And those who pass the exam have very low marks.

Keeping in view the above fact I am sharing you some facts about their failure and low marks.

Why do Marks and Grades Not Everything in Your Life?