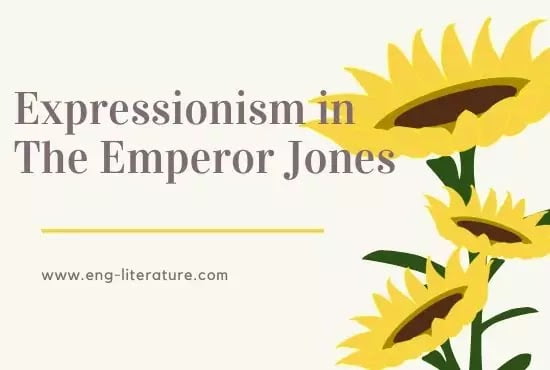 Expressionism in The Emperor Jones

Expressionism is a revolt and protest against: society. In drama it is a technique that lays emphasis on inner reality or stream of consciousness. The inner reality is communicated through various devices such as masks, asides, Soliloquies, broken dialogues, stage-effects such as lighting, costumes, etc. The dramatist deforms the plot and depersonalizes the characters. The characters, events and the scenes are as few as possible. The play is not divided into Acts but into Scenes. The photography of realism, the dramatic sequences of events, is abandoned for a stream of consciousness in terms of stage-symbols whereby the surface of life becomes disjointed, scattered, as in a dream. There are also distortions and exaggerations in expressing the abstract through the concrete.

The play being a psychological study of Brutus Jones, his visions, is and scars and his consciousness, is an attempt to show what is happening in his soul. Further, the use of symbols, its loose structure, the technique of interior monologue, blend of past and present, and the use of stage effects to express inner reality, are some of the things that make The Emperor Jones an expressionistic drama.

Scenes II to VII which take place at night in the forest are expressionistic. But in these fantasy scenes the movement is straight-forward, O’Neill writes with an eye on the clock, and the passing spiritual decay and regression of Jones, and the end of each scene is marked by Jones’ firing a bullet. Indeed, there are as many bullets in his revolver as there are scenes and in each scene some vision from his personal unconscious’ or his collective unconscious presented, and the vision disappears as soon as a bullet is fired.

The expressionist seeks to solve the problem by representing the soul of man in the form of external symbols. He produces figures moving obscurely on a darkened stage to personify good or bad motives. He gives words to unseen voices to express the secret thoughts of a man’s mind. O’Neill has also used symbols in The Emperor Jones. For example, Brutus Jones symbolizes the irrational and brutish in every man, the silver bullet is the symbol of his pride, and it also stands for worldly wealth and greed for money. The dark and dense forest symbolizes the inner darkness and confusion of Jones, his escape through the forest is symbolic of his escape from his own self, from the memories of his criminal past.

The expressionists are not concerned with individuals at all. They write of capitalism, industrialism and so forth, but they make no attempt to personify any one of these in a realistic guise. They have no quarrels with individuals but only with systems. In this respect the Leftists believe that The Emperor Jones is an expressionistic play.

Not only is the structure of the plot in an expressionistic drama loose but also the pattern of dialogue is different. The substitute o symbolic types for individual human beings have caused a change in dialogue. The expressionist does not attempt realistic conversation. In an expressionistic play dialogue is used to reveal the pre-speech love and disjointed inner thoughts of the character. In The Emperor Jones O’Neill has used realistic dialogue only in the first and the last scenes and in the remaining six scenes instead of realistic dialogue the dependence is one monologue, and what happens inside the mind of Jones.

In order to render the inner terrors of the chief protagonist, O’Neill has made extensive use of interior monologue.

The one of most of the expressionistic plays is pessimistic and they end at the note of tragedy. The end of The Hairy Ape is tragic, so it is of The Emperor Jones. The play is a tragedy and ends with the death of the hero. The final scene is important for the portrayal of Jones as a tragic hero who died as he lived, with a kind of grandeur, false though it was.

Hence, The Emperor Jones is the greatest of American expressionistic plays. The story of flamboyant Negro, enacted to the frenzy of the tom-tom, the sustained monologue and the rapidly shifting setting framed into one single desperate action, were all unique features that made the play an instant success as a superb expressionistic drama.