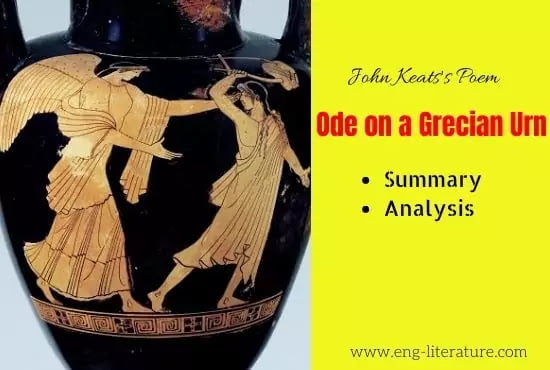 Ode on a Grecian Urn Summary and Analysis

About “Ode on a Grecian Urn”

The Ode on a Grecian Urn was composed in the spring of 1819 and published in 1820. The Greek vase which inspired Keats was no figment of his imagination, but has a real existence. This vase is still preserved in the garden at Holland House, Kensington. It is also likely that the inspiration of this poem might have been partly derived from the Elgin Marbles (large collections of old Greek sculptures brought to England by Lord Elgin, a British general and ambassador. They are now in the British Museum). Mr. A. S. Murray in a letter to Mr. Arnold has further suggested that Keats obtained his knowledge of the urn from Piranesi’s work (Vol. XIII, published 1750) which gives an engraving of it.

Ode on a Grecian Urn Summary

The poet sees a Grecian urn which has not been affected by the onslaught of time and has been lying silently on the lap of time. The urn gives the record of a past age more graphically than poetry. Its borders are encircled with garlands of leaves. The poet asks whether the figures depicted on the urn are of gods or men or both, whether they are from Tempe or Arcadia, who the maidens trying to escape the pursuit of mad lovers and the musicians playing on pipes and timbrels are.

The music that is listened to by the spirit is sweeter than the music heard by physical or “sensual” ears. The youth represented on the urn as playing on the pipe will always go on playing under the tree which will never shed their leaves. And the lover who is hotly pursuing the girl will never succeed in catching and kissing her. But he need not be sad, because he will never cease to love her and his beloved will always be lovely.

The trees sculptured on the urn will ever remain in their spring freshness and the musician will always continue to pipe new songs without being tired. The warmth of the young man’s love will never cool down.

The poet sees a sacrificial procession depicted on the um. There is a crowd of people; a priest is leading á heifer decorated with garlands to the sacrificial altar. The crowd might have come out of some town situated by a river, or on the seashore or on a mountain. The town must have been empty at the time, and it must ever remain empty.

The urn is a genuine specimen of Greek art sculpturing a number of men and maidens, branches and weeds. It seduces us from the ordinary life of thought into the extraordinary life of the imagination. It will continue to exist, even when the present generation will die out, and in the midst of sufferings as yet unknown to us, it will teach us the lesson that beauty and truth are identical the only lesson we ought to know.

Ode on a Grecian Analysis

The Ode on a Grecian Urn is one of the greatest odes of Keats and shows his poetic genius at its maturity.

The Ode on a Grecian Urn has a neat perfect and organic structure. It has clear-cut three parts: introduction, main subject and conclusion, corresponding to what Aristotle calls a beginning, a middle and an end. The first stanza gives the introduction, the second, third and fourth stanzas the main subject, and the fifth the conclusion.

The introduction presents the urn in its mystery and shows what questions it poses to the poet. The main subject consists of the scenes on the urn as Keats sees them with an imaginative insight into the relation between art and life. The conclusion answers the questions posed in the introduction and announces the message of the urn to mankind.

The Ode is a representative poem of Keats. It illustrates all the essential features of Keats’s poetry-his Hellenism, his concept of beauty, his sensuousness, his meditativeness, his felicity of expression.

Hellenism is one of the most remarkable features of Keats’s poetry. The Greek spirit was re-incarnated in him so much so that Shelley was impelled to say, “He was a Greek!” The Ode on a Grecian Urn reveals his Hellenism most fully. The subject is an urn, a relic of ancient Greek sculpture. The urn is embossed with the human figures marked by the animal vitality of the ancient Greeks and with scenes that vividly reproduce the ancient Hellenic life with its religious rituals and animating faith. The “little town by river or sea-shore or mountain-built with peaceful citadel” is as Greek a thing as anything in Homer or Theocritus. The Greek sense of beauty and Greek sensuousness mark the Ode.

His Hellenism also consists in the directness and lucidity of expression and concreteness of imageries which raise the description to vivid reality (“that heifer lowing at the skies”, the little town….emptied of its folk”) J. H. Fowler rightly observes,

“…. no one more truly has vivified, whilst idealizing, the picture of Greek country life in the fancied Golden Age than Keats in these lovely….stanzas.”

Despite all his Hellenism Keats is essentially romantic. In this Ode he escapes into the world of art which has caught the ancient Greek life in its unfading, imperishable beauty.

Keats’s sensuousness is in evidence in the descriptions of the sculptured scenes. The mad pursuit of maidens, the struggle of maidens to escape being kissed by bold lovers, the wild ecstasy of impassioned youths, the melodist playing on “soft” pipe beneath the trees full of green leaves, the heifer lowing at the skies with “all her silken flanks with garlands drest” etc.-all these feast our senses with sweet pleasure.

Keats’s poems, specially his Odes are not only sensuous, but also reflective. And in the Grecian Ode the reflective element predominates over the sensuous. In his discussion of the advantage possessed by plastic art over human life in the element of permanence (Heard melodies are sweet, but those unheard/Are sweeter) Keats enters the realm of metaphysics, while in the celebrated words which close the Ode he treats the great ethical question of Summum Bonum of human existence as consisting in a knowledge of the equivalence of Beauty and Truth.

The Ode falsifies Keats’s famous suggestion, “O for a life of sensation rather than of thought.” Dr. Srikumar Banerjee rightly says: “The Nightingale Ode is a poem of rich sensuousness….., the Grecian Ode is a predominantly reflective poem in which the poet explores the interspaces of silence that surround an incomplete drama of human life.” The personal emotion is almost absent in this poem, the only personal touch being the reference to the satiety and pain attendant on earthly love.

The Ode reveals Keats’s final concept of beauty. After his long quest Keats came to see that beauty is the reality beyond changing appearances, and as such it is identical with truth. That men suffer and will continue to suffer in the future is a truth and hence a thing of beauty. This is what the urn will teach the generations of men to come.

Like the Nightingale Ode, the Ode on a Grecian Urn shows the magical felicity of Keats’s style. It is full of well-chosen phrases, expressions and concrete images – “Leaf fringed legend”, “Fair youth beneath the trees”, “happy melodist….For ever piping songs for ever new” “the heifer lowing at the skies”, “little town…emptied of its folk”, etc. These expressions and images effectively stir our imagination like some pictures and sculptures. As we read the expressions the pictures of the urn bordered with ornamental leaf work round the different scenes, the melodist, the heifer, etc. start up before our vision. It is in these perfect verbal picture that the poet’s sensuous pleasure becomes spiritualized into joy irradiated with beauty.