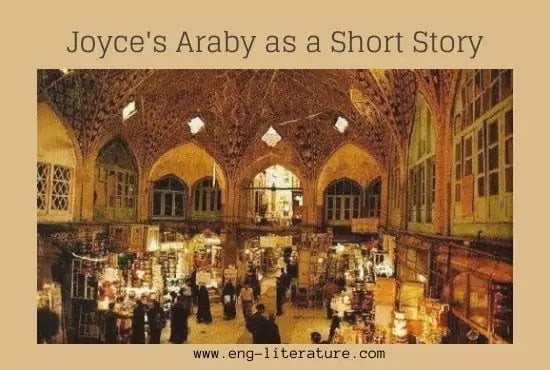 Araby as a Short Story

A short story, as defined by Edgar Allan Poe, one of the finest storywriters, is a brief prose-narrative. He even claims that this requires from half an hour to one or two hours for its perusal. Hudson calls that prose narrative a short story which can be read at a single sitting.

Again, the short story, because of its limited length, cannot entertain a good many characters. The paucity of characters is a part of its brevity. Of course, the characters are well developed and remain quite alive even within a limited range. They are not all sketchy and some of them may be lively and engaging enough.

The brevity of the short story is also artistically achieved through the structural design in which there is a smooth progress from the exposition through the development to the climax. The singleness of the story and the situation is nowhere missed. The impression, as emphasized, too, remains single all through.

Lastly, the short story follows an utmost economy in its words and expressions, so necessary to achieve brevity. Whether in dialogue or in narration, stringent economy is observed in a good short story. Of course, its literary quality should, in no case, be sacrificed at the altar of brevity.

Araby as a Modern Short Story

Of course, Joyce’s Araby, an autobiographical story deals with a matter of profound psychological interest of a young boy’s fascination for what he considered to be his ideal life. Naturally, this is no conventional tale. The story has no regular exposition or development from the point of view of the plot. It is all about the psychology of a boy who was drawn inexplicably to a girl, the sister of his friend, and was haunted with the dream of Arabys, an oriental fete held in Dublin. The climax of the story comes with the author’s utter frustration, after his visit to Araby, where he went with much expectation and returned, dejected and disillusioned.

The plot of the Araby story is, thus, intricate enough, based on the state of a boy’s mind, but the unity of impression is well retained through the singleness of the situation. The author’s attachment to Mangan’s sister and his longing for Araby are harmonized into one impression through the boy and his eager and romantic visualization. Though there is no conventional structure, the singleness of the effect is achieved through the boy’s psychology.

The course of the plot, in fact, has a smooth development, although the story element, as stated, is not conventional here. The author’s longing lingering look at Mangan’s sister, her talk with him, his proposal to go to Araby and his actual experience there form the subtle chain of development of the story which has a psychological interest rather than incidental. The modernity of this story is affirmed here.

In the second place, Araby is a typical short story in which the number of characters is but a few. The main two figures in the story are the boy and Mangan’s sister. But even the latter is kept more as an impression than as an active real being. Of course, the author’s uncle, aunt, friends, neighbours and the sales hands of Araby are mentioned, but they are no characters, in the strict sense of the term. For its extremely few characters, Araby testifies to the condition of a good short story.

Lastly, the precision found in this story is to be mentioned and admired. Joyce is not found to play with words, but has employed the concise and right expressions all through. His artistry is here unique, for the story remains a happy reading, despite the intricacy of its psychological probe into a young mind. Joyce’s masterly craft, as a story-teller, retains all through the interest of the story. Indeed, Araby is a good short story–a good modern short story with its modern technique of storytelling through the psychological introspection

Araby as a Realistic Short Story with Symbolic overtones

In Araby, there are, two types of elements – realistic and symbolic, and because of their happy co-existence the story has received universal praise. The author has shown his skill in the depiction of the reality while dealing with the boy’s home life. We also find a beautifully accurate realism in the details of Dublin’s life that the story contains.

Another way through which Joyce has shown his skill in realism is the depiction of uncle’s characterization. The boy’s experience in Araby has also been described with an eye to realism. Though he saw outside the magical name, inside he found altogether different events waiting for him. While dealing with the boy’s dream – his earnest desires – the author’s language becomes poetic and turns to have symbolic overtones.

The denouncement is found in the boy’s return from the bazaar empty handed and his self discovery that he was no better than “a creature driven and derided by vanity.” The conflict of the story arises out of a clash between dreams and reality.