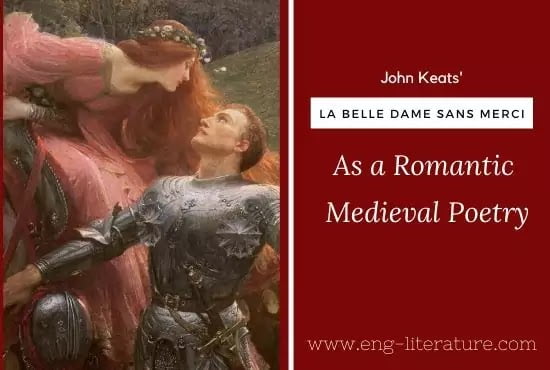 La Belle Dame Sans Merci is the glory of romantic poetry. In it the medieval revival which constitutes one of the most significant aspects of romanticism reaches its culmination. Keats was ever enamoured of the Middle Ages. But it was the external glitter and glamour of the Middle Ages that captivated him. Their weird spirit – the elements of their magic and marvel hardly stirred his imagination.

In La Belle Dame Sans Merci Keats not only reproduces the medieval pomp and chivalry, but also creates the typical medieval atmosphere of enchantment and marvel. The picture of the knight-at-arms with which the poem opens at once transports us into the medieval days of knight-errantry. The beautiful fairy lady who bewitched the knight and ultimately led him to his spiritual doom recalls the medieval vampire woman who sucked men’s blood with cold. The reference to elfin grot, “honey wild and manna dew”, dream-vision of the skeletons of kings, princes and warriors diffuse over the whole poem the mood of awe and wonder that is associated with the medieval mind.

Again in the treatment of medievalism Keats, like Coleridge relies more on subtle suggestion than on description. Nothing is said definitely and in detail. Everything is left to the imagination of the reader. Nothing is said about the nature of the “fairy’s child” or about the fate that awaits the knight. The poem is truly a masterpiece of horror-stricken reticence. George Saintsbury rightly says:

“He (Keats) could have known extremely little of medieval literature; yet there is nothing anywhere which catches up the whole of the true medieval romantic spirit as does the short piece of La Belle Dame Sans Merci.”

Like a romantic poem La Belle Dame Sans Merci gives a faithful description of nature. It portrays the winter landscape with its barrenness and desolation:

“The sedge has wither’d from the lake

And no birds sing.”

La Belle Dame Sans Merci is a superb example of the ballad. The story of a mortal creature being bewitched by an enchantress and carried to an elfin world is a fairly recurrent theme in ballad literature. The poem has all the simplicity and directness, the weird beauty and imaginative intensity of the best ballads. L. Hearn rightly says:

“The theme, the phantom woman whose love is death, is almost as old as the world; thousands of poems have been produced upon it. But in simple weird beauty I do not know of anything in all English literature exactly like this.”

Though the poem is a ballad, it is intensely lyrical like a romantic poem. It is in a sense a cry from the poet’s heart, a tale of disillusionment told by a man whose dream of love has faded, leaving behind a taste of dust and ashes in the mouth. Consumed as he was by an intense passion of love, the knight at arms seems to be a reflex of Keats’s own self. Fanny Brawne who played with the poet’s love is the lady without mercy. But the subjective note seems to be utterly impersonal because of the narrative and dramatic form of the poem.

Like other poems of Keats La Belle Dame Sans Merci turns on the contrast or conflict between the ideal and the real – between reality and imagination. The elfin grot represents the ideal world and the fairy’s child its denizens. The knight belongs to the real world. The adequate communication between these two worlds is impossible as is evident in the lines:

“And sure in language strange she said

The poem illustrates Keats’s use of concrete images. It opens with the description of the barren landscape which images the knight’s desolation. The rich autumnal harvest conveys the sense of fulfilment and a promise of sustenance. The twin images of lily and rose call forth the memory of the transient bliss the knight had in the elfin grot. The “fading rose” also indicates that the knight is progressing towards death. The food that the fairy offered “roots of relish sweet”, “honey wild, and manna dew” is the image for the unbridgeable distance that exists between the ideal and real worlds. The image of death – pale kings, princes and warriors suggest the tragic fate of those who leave the mortal sphere in search of an impossible ideal.

The beauty of the poem lies in its marvelous suggestiveness. Words, expressions and images are so used as to call up vivid pictures before our vision. As we read the lines

“The sedge has wither’d from the Lake

And no birds sing.”

the picture of the sedge withering in a lake and the dreary winter desolation starts floating before our mental eyes. The expression “fragrant zone” is rich in suggestion. It conjures up the picture of the girdle made of sweet-smelling flowers.

John Keats follows the example of Coleridge in his use of the ballad metre. But his use of a short fourth line, heavily accentuated, and admirably expressing the weird tragedy is his own development.