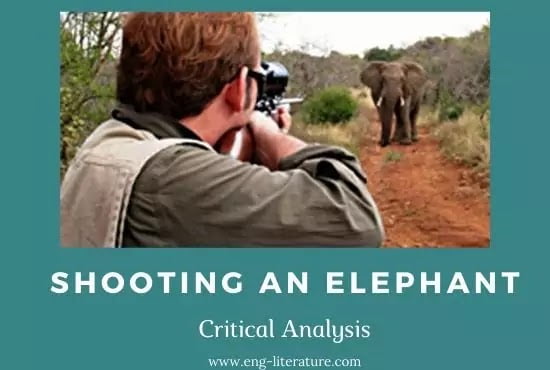 Louis Cazamian in A History of English Literature declares George Orwell’s work as a whole to be “the citizen’s manifesto against the powers that be”. Even from his youth, Orwell rejected many of the accepted social and political conventions, and his novels and essays clearly reveal him as a non-conformist. In all his novels and in many of his essays, his strongly dissenting voice can be clearly heard. And though Shooting an Elephant is a narrative essay, it gives us a fairly clear idea of Orwell’s view of British imperialist domination in the East.

Even from the start of his career as a police officer in British occupied Burma, Orwell was not favourably disposed to the British imperialist policy. He had a genuine sympathy for the oppressed native people, and he hated himself for being a tool of imperialist domination. But even so, he did not quite realise how utterly futile was the white man’s domination in the East. This he came to realise through an experience which has been described in his essay Shooting an Elephant.

The author was then a sub-divisional police officer in Moulmein. a township in Lower Burma. One morning, he received the news that an elephant, under the attack of ‘must’ had broken its chained was ravaging the bazaar area. So he started out with his light rifle to see what the matter was. On his way, he received a lot of conflicting reports on the behaviour of the elephant.

Finally he reached the locality where the animal had been last seen. Then the veils of a woman attracted his attention. As he went forward the dead body of a black Dravidian coolie came into his view. He had been trampled to death by the elephant. At once the author sent an orderly who fetched an elephant rifle for him. At the sight of this weapon, the people who had gathered there became greatly excited because they now took it for granted that the sahib was surely going to shoot the elephant. But, till that moment, the author did not have the slightest intention of killing the elephant.

As he went a little farther, he saw the elephant in a paddy field. It looked peaceful enough, and the author felt there was no reason for killing it unless it turned savage again. At this moment, he turned round and saw that a huge crowd of natives had followed at his heels. Looking at their eager, expectant faces, he suddenly realised the absolute helplessness of his position. He felt that, in spite of all his reluctance, he would have to shoot the elephant, after all. For, in that critical situation, he was expected to live up to the image of the white men in the colonies-a man of extra-ordinary strength, courage and determination, who must remain unmoved in the face of every crisis.

Thus, he was not free to act according to the dictates of his own conscience. He was a mere puppet driven by the will and expectation of the thousands of natives surrounding him. At the moment of crisis, he realised the bitter truth :

“when the white man turns tyrant it is his own freedom that he destroys.”

Thus, from his own experience, he realised that the white man’s superiority over the natives was but a hollow myth with no substance at all.

The essay starts with a reference to the strained relations between the ruler and the ruled in Moulmein, a township in Lower Burma. Anti-European feelings ran high among the native people though they did not have the courage to rise in open rebellion against British domination. So their hatred of the white man found expression through devious ways. They never missed an opportunity of baiting white men or jeering at them. They would even try to inflict injuries on white men whenever they could do it with impunity, As a police officer, the author was an obvious target of such petty attacks and insults. Sometimes the author felt tempted to have his revenge on these jeering “devils”, but his better reason always prevailed. He rightly recognized such feelings as the ‘normal by-products’ of imperialism and he rather hated himself for serving a power that oppressed people and held them in subjection.

But there are, in this essay, far more overt references to the evils of imperialism. As a police officer in Burma he had seen ‘the dirty work of Empire at close quarters’. He refers to the lock-ups as ‘stinking cages’ in which native prisoners were huddled like cattle, He has a vivid memory of the ‘cowed faces’ of long-term convicts and the ‘scarred buttocks’ of men who had been flogged with bamboos.

But his greatest accusation against imperialism is of a radically different nature. In this essay he asserts that the shooting of the elephant gave him a better glimpse of the real nature of imperialism than he ever had before. It is this incident that opened his eyes to the ‘hollowness, the futility of the white man’s domination in the East’. In order to make its domination safe and secure, imperialism has to build up a highly inflated image of the white man.

Thus he loses his freedom of action. He must not act according to the dictates of his conscience; he must act in strict conformity with the codes of conduct established by imperialism. The author had shot the elephant much against his will. While, apparently, the author was the leading actor of the piece in reality he was ‘an absurd puppet’ driven by the will of the crowd that surrounded him. Thus, imperialism harms and oppresses not only the subjugated people; it also harms its own servants by subjecting them to a process of moral and psychological degeneration.

Even the advocates of imperialism would find it difficult not to agree with Orwell’s view of its harmful effects. History has confirmed his views even to the last detail.

And the history of our country under the British rule bears ample evidence to the evils of imperialist domination. As to the evil effects of imperialism, Orwell’s views have been confirmed by many white men who have served in the colonies.

But it would be going rather too far to describe Shooting an Elephant as ‘a critique of imperialism’. Orwell’s primary aim in this essay was to describe an incident which had made deep and lasting impression on his mind. The views on imperialism expressed here are but incidental to the main theme of the essay. So it would be more pertinent to describe Shooting an Elephant as a narrative essay incorporating certain relevant criticism of imperialist domination in the East.