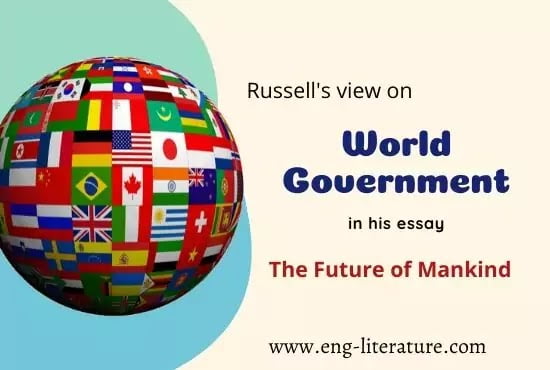 Bertrand Russell surely disproves the common
established notion about philosophers, that, they are absent-minded and always
engage their heads in making speculations, when he meditates on the
possibilities regarding “The Future of Mankind“. He has done so,
because of his high sensitivity and deep concern towards human beings. He was
called as a traitor to his country because of his anti-war stand during the
First World War. But his only concern was towards ‘humanity’. Later he was
awarded a Noble Prize for contribution towards peace. In the words of Erich
From:

“Bertrand Russell fights against threatening slaughter. because he is a who loves life.”
Russell discuses three possibilities about “The Future
of Mankind.” According to him, one is the com extinction of human life on
earth, the second is that human life will be reduced to barbarism and the final
is that there will be a world government that will control all nations and
countries. Among these the first possibility, describes, is the complete
extinction of all human beings. This might happen after the Second World War in
atomic weapons will be used. Russell deals it logically, for he says, if still
there will be some life after the end of that war, there would soon be another
war, for there would such “die-hard” in the super powers, who would
prefer the extermination of life, than surrendering to the victory of the other
power.
And if any man would miraculously be able to escape
from death, he may consider himself to be the emperor of the whole world, but
his reign would not be long and his subjects would be only dead bodies and
Russell says:

“With his death the uneasy episode of life will end, and the peaceful rocks will revolve unchanged, until the sun explodes.”
The second possibility, which Russell discusses, is the reversal of civilization to its primitive conditions. Russell suggests if the Second World War fails to eliminate all signs of life, still that destruction would take world to the age of “barbarism”. For in the war, the major cities and industrial areas would be destroyed and the bacteriological warfare would destroy crops and cause famine. Russell says there may be a few libraries and laboratories and scientists. But the people, might kill the remaining few scientists, in hope of some “Golden Age”, for:

“Extreme hopes are born of extreme misery and in such a world hopes could only be irrational.”
The third possibility, according to Russell, is the establishment of a universal government all over the world. He discusses this idea in more than one ways in which it could occur. The one is the victory of America, in the Second World War. Other is the victory of Russia, or the world government, would emerge as a result of mutual agreement. The best among these ways is the idea of mutual agreement.
Russell’s view of the world government has been criticized greatly. People have raised arguments considering it as a “Utopian ideal”. Most of the people think that such an alliance cannot be brought peacefully, for no nation would
surrender her liberty. Russell also admits that the chances of government in a
formal ways are extremely remote. He thinks that a world government, would not be for voluntarily, but it
would have to be brought about by force.
Russell prefers America to control the government and
he has given many reasons for his preference to America but his preference has
no political and ideological basis, but it totally depends on the probable
condition of people under these states. The major reason to prefer America is
that, she respects the values of civilized life like freedom of thought,
freedom of inquiry and humanness. But on the other hand, in communistic
countries like Russia there is not liberty for individuals and the government
has a strict hold on the common masses.
Moreover, there is considerably less orthodoxy in America than in Russia. There, scientist, authors and philosophers can choose any subject regardless of state interest. While in Russia such things are also influenced by official views.
Russell suggests yet another way to prevent a horrible war. In his opinion, America would make an alliance with the British common wealth nations and with other European nations who want to join them. All the military power, of these countries, and weapons should be united and then they should declare war on the nation. In this way Russia might also be agreed to join the alliance just by the threat of war. But still he does not leave the possibility of Russian refusal.
In such an alliance, there should also be a legal check on the power of the leader, by other nations, so there would not be a “chance of corruption”.
Among the many advantages, of a single world government, is that the defense expenditures of every nation a diminish and by this way human beings would be more happy than before.
But a little earlier than this, Russell’s suggestions did
not seem to be implemented to the world. For, China has emerged as a world
power with nuclear weapons and it would certainly not like America as
the only dominant on to control both, East and West.
However, Russell’s chief concern in all this
discussion was his good will and sincere concern towards peace and survival of
mankind. We can surely conclude that he was a true optimist, pacifist and
humanist.