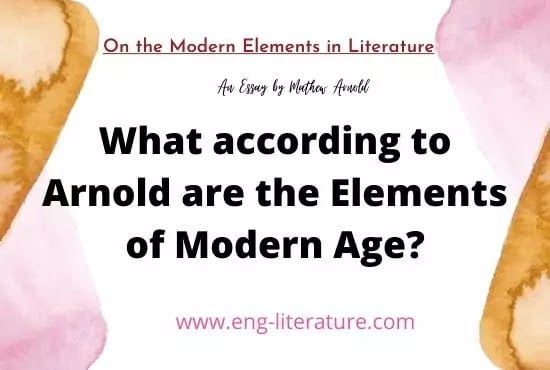 On the Modern Element in Literature is the inaugural lecture of Mathew Arnold delivered as a professor of poetry at Oxford in the year 1857. In this essay, he shows us how an age can rise above the false ideology of modernism by strictly following the rich convention of the past, especially those of ancient Greece. Tormented by the growing materialism in the name of modernity and advancement, of his age, Arnold did attempt to measure the true direction of modernity.

Arnold lays down the characteristics which are the features of a modern age. He begins his lecture stressing the true meaning of moral and intellectual deliverance, which, he believes can be achieved through a simultaneous appreciation of past and present. Subsequently, he refers to both external and internal features that make an age truly modern.

The basic feature of an advanced civilization is to free its denizens from fear of wars and battles. It is not that they should completely be stopped, as it is hardly possible, it should not be allowed to affect the daily intercourse of life. The citizens should feel free from the danger of violence. Crime and political confrontations will persist but they should be confined within a strict limit so that peace in the community persists. And above all there should hardly be any individual considering himself above and beyond law. In fact, in modern society, a harmonious existence of freedom and taste, are allowed to be cultivated uninterrupted. The presence of this sort of peace in society brings about order and serves immediately in social growth.

The internal feature, contributive to the true concept of modernity, according to Arnold, is intellectual in nature. It is the growth of a tolerant spirit – a liberal co-existence of different views and opinions. This spirit not only helps escape chaos but also contributes to develop knowledge and wisdom. It ends all the petty conflicts and contradictions in society and ensures the idea of plurality.

Before explaining the supreme characteristics of a modern age, Arnold stresses on the need of the formation of good culture and taste and capacity as well as the scope for refined pursuits. Moreover, the advanced civilization ensures various conveniences of life and a better standard of living without neglecting the true importance of art and literature. It is true factors that ensures the intellectual maturity in man which to him, the most precious quality of a modern age. This comes with the growth of power of observation, possession of a critical spirit and the refusal to take things on authority. It implies no blind imitation but encourages appropriate judgement by the application of reason and rationality.

Arnold finds presence of enough factors of a modern age in ancient Athens – in the age of Pericles. They as reported by Thucydides, left the habit of wearing arms. A spirit of tolerance, in abundance, was present in their society. They did not object frequently to the taste and opinions as opposed theirs – in fact, encouraged a parallel study of diversity to acquire knowledge. Moreover they had enough convenience and leisure of life but had the cultural nourishment not to overuse them.

Above all they demonstrated the supreme growth of critical spirit which could be traced in their rational arrangement and thoughtful appreciation of different facts.

Arnold’s own positive and critical temper has been fostered by an appreciation of the progress brought on by science and true conception of culture. Hence it was not unusual for him to adopt a realistic attitude and at the same time to cast many a lingering look behind, to find a remedy for the ever recurring struggle between the old order and the modern spirit.