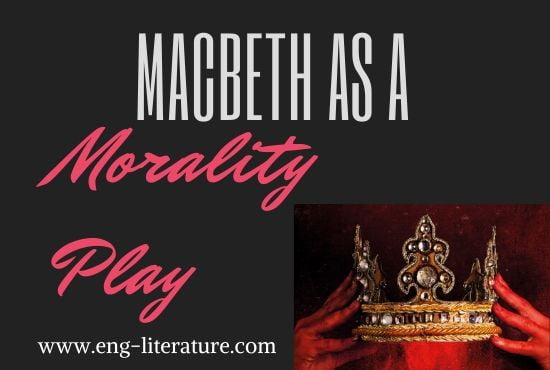 Macbeth as a Morality Play

A Morality play is a dramatization of personified abstractions generally of vice warring against virtue. The characters of the play symbolize certain personified attributes as Virtues and Vices. They are usually abstract qualities, which are given concrete shapes. They may represent mental attributes and are of universalized types, set in the framework of allegory. The themes are primarily the struggle for the possession of the soul or mankind, between Vice and Virtue. The sole purpose was to impart a lesson for guidance through life. The painting of the moral is generally not consciously executed.

Didacticism is the chief characteristic of a morality play. In a study of the most important morality plays, namely Everyman and others; we come across such personified characters as Beauty, Friendship, Relationship, five senses, wits, the seven Deadly Sins, Pity, knowledge, good and Bad Angels and so forth and so on.

In Macbeth or Marlowe’s Doctor Faustus, we do not come across many personified abstractions. Yet in both the plays we have a distinct moral purpose. In Doctor Faustus those is a constant struggle between Good Angel and Evil Angel, and the hero is torn in a conflict. In Macbeth there is a conflict, in the hero’s soul. His Guardian angel never deserts him, for otherwise he could have peace, and he does not. Conscience is atrophied, but never dead.

Ever since the dawn of art and literature, there has been a conflict between Art and Morality. The idea of art for art’s sake is a recent days. Most writers have been in favour of morality, and they differ only in degree. Shakespeare has not of course, illustrated Poetic Justice‘, but the ultimately good has always triumphed over Evil forces.

In Macbeth there is a distinct moral significance. In all his plays there is a moral order. In King Lear the king is governed by pride and arrogance for which he commits a series of sins. But the evil forces, Goneril, Regan and Edmund have to pay dearly for their misdeeds. And King Lear becomes a redeemed man, a man reborn in the fire of life, with all his dross eliminated. Macbeth and Lady Macbeth are goaded by inordinate ambition to ascend the throne. Macbeth starts and seems to fear the fair-sounding prophecy of the witches. “Valour’s minion”, and “Bellona’s bridegroom”, Macbeth has already thought of murdering Duncan and ascending the throne, and the witches are but the external manifestations of his evil design.

And excessive ambition is a Vice, and it must have a struggle with virtue. The witches must not be held responsible for his ambition, As George Meredith rightly points out;

No villain need be. Passions spin the plot

We are Betrayed by what is false within”.

Lady Macbeth, for a while; figures prominently and urges her husband on to the misdeed, but her vice does not stand her in good stead and pushes her to the background. Lady Macbeth commits suicide and that heralds the triumph of virtue. It is not death alone; she has to pass through unbearable and even unimaginable torments. She experiences hell even when alive.

Macbeth and Lady Macbeth symbolize Vice and Evil – commotion in the moral world. Horror and disorder, bloodshed and torture are let loose. Banquo and Macduff are symbols of good. Banquo does not start at the prophecy of the witches, although he learns the heartening news that his descendants would succeed to the throne. On reflection he fully understands that the witches are nothing but the “instruments of darkness“. The witches, he says,

“Win us with honest trifles, to betray us

Yet Banquo is not a symbol of absolute virtue. He suspects Macbeth, and his suspicion is just. But he never shares the news to anyone that Macbeth has waded to the throne through blood. He deliberately shuts his eyes to the enormity of Macbeth’s crime against Duncan. His inactivity and indulgence to Macbeth’s crime are also signs of moral collapse bringing his ultimate catastrophe.

Macbeth fears Macduff not so much for his courage and heroism as for his moral superiority. Macduff’s patriotism and loyalty to Duncan and Malcolm are always clearly manifest. Macbeth and Lady Macbeth stand alone on one side, while against them are pitted the virtuous persons like Macduff, Lennox, Ross, Monteith and Angus. Macbeth fails to kill Fleance, for the latter symbolizes good.

Guilt is followed by nemesis, i. e. divine retribution. The deaths of Macbeth and Lady Macbeth mark the end of Evil; the rise of Malcolm and Donalbain marks the beginning of good. Circle of order is restored, and the reign of terror, anarchy and disorder comes to an end. The actions of Macbeth show that he has his own interest, for he rides rough-shad upon everybody’s feelings. Unlike good rulers, he never thinks of his subjects’ Welfare. The king and the Queen are totally isolated from the rest of the society. They have been totally estranged from them. Scotland has been suffering from a deadly disease represented by Macbeth. But Malcolm, Donalbain and Macduff cause the purgation of the land and inaugurate peace and order.

Like a traditional morality play, Macbeth also brings into sharp focus the conflict between vice and virtue. Macbeth, once so noble and virtuous, plunges headlong in the cesspool of heir. After Macbeth death, he can never expect a beatific vision. It is Hell, eternal damnation that yawns before him in all its hideousness. For a while he had repentance after Duncan’s assassination. Macbeth exclaims :

Stepp’d in so far, that should I wade no more

Returning were as tedious as go o’er”.

Macbeth, after a series of murders, has no more remorse. He feels that he is pushed into the Hell. All scruples are brushed aside. He has become a hardened criminal.

“For mine own good

All causes shall give way”.

Vice, therefore, triumphs for quite some time. For Macbeth, there is no chance to retrace his steps. His criminality swells and grows up from moment to moment by an intrinsic necessity, and until it reaches its inevitable goal of retribution at death. Man forsakes him, and so does God. The triumph of virtue makes Macbeth a morality play.