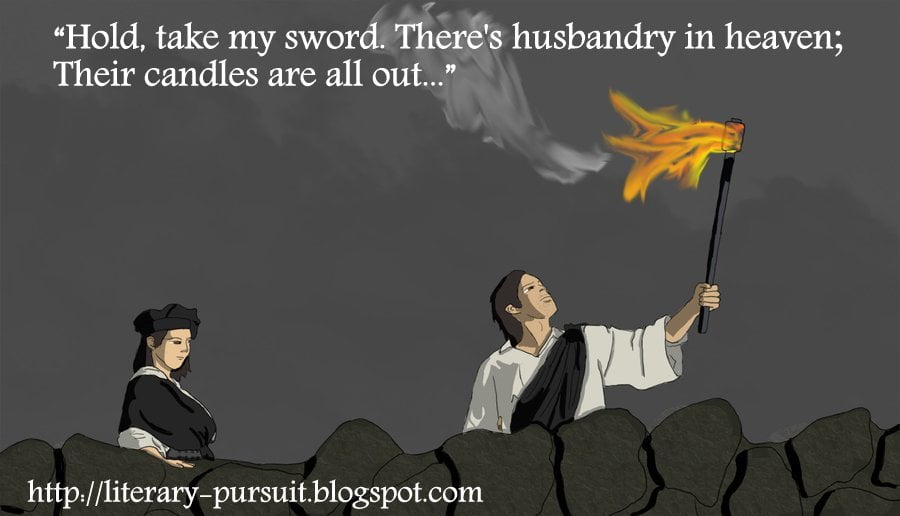 Shakespeare has portrayed the character of Banquo in a very favourable light and the main function is to offer contrast to Macbeth. Banquo is a perfect foil to Macbeth. Both Macbeth and Banquo are great heroes and Generals. Both have repulsed the foreign invasions and have been duly honoured by King Duncan. They are spoken of together as

Both Macbeth and Banquo possess brave hearts. Almost equal in military prowess and courage, both are intrepid marshal and take part in the same battle and win the laurels. Both of them are exposed to the temptations of the witches, although they react differently. Macbeth shows the reflex action on hearing the ‘supernatural soliciting’ and expresses his inner temptation to match the prophecies of the witches. On the other hand, Banquo is judicially detached character. He dismisses them as “bubbles on the earth”, or as “instruments of darkness”.

Yes, Banquo lacks the elemental grandeur of Macbeth, but his fundamental goodness ensures his moral superiority to Macbeth. Macbeth finds in Banquo a “royalty of nature”. He is little frightened and says: “My genius is rebuked under him”. Being terrified Macbeth also confesses:

“…there is none but he

Whose being I do fear.”

Banquo with all his nobility of nature and heroism is modest. Always level-headed he is not swayed by praise and flattery. When Duncan praises him extravagantly for his bravery, Banquo replies with sweet humility:

“There if I grow,

The harvest is your own.”

Loyalty is in the blood of Banquo. As long as Duncan is alive, he is loyal to him. But as Macbeth ascends the throne, he remains loyal to him. But Macbeth doesn’t appreciate this loyalty. Banquo has to pay the dearest penalty for his studied neutrality.

But we have a little inconsistency in Banquo’s character which Shakespeare has not sought to resolve or eliminate. True Banquo does not do any misdeed to promote his own cause. But he is not courageous and even loyal enough to resist the crime that is in the offing. He knows the prophecies of the witches, and he has reasons to suspect Macbeth. But he deliberately shuts his eyes to the contemplated crime of Macbeth against Duncan. He has no the courage to bring Macbeth’s crime to limelight. He has not the strength of character like Macduff who takes the destiny in his own hand, after sacrificing his entire family. Undeniably there are certain black-spots in his character like irresoluteness and carelessness.

According to A.C. Bradley ‘Banquo remains as a passive character all through the play; he never becomes active even when the royal hope was there.’ Let not his passive nature make us blind to other virtues. His conduct is uniformly dignified. At the end we may say that dramatically Banquo has been left as an incomplete character.