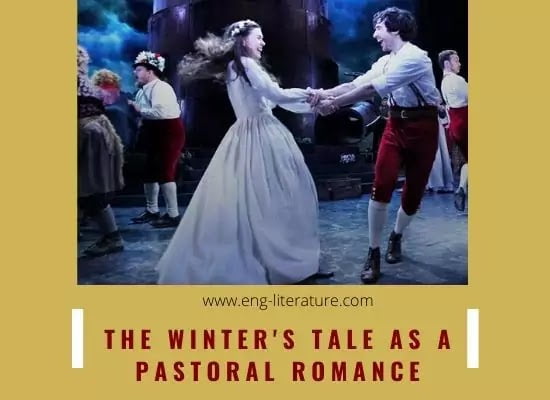 The Winter’s Tale as a Pastoral Romance

When we review the drama under discussion we arrive at a definite conclusion that the play The Winter’s Tale is neither predominantly a tragic play nor predominantly a romantic play. It may be regarded as a tragi-comedy. Before spilling ink on the elements of pastoral romance in The Winter’s Tale it appears appropriate to discuss what pastoral romance is.

Lexically the world “Pastoral” means portraying country life or countryside especially in a sentimental or romantic way. Etymologically the word “Pastoral” has been derived from the Greek world “Pastor” which means “to graze”, Romance means a feeling of intensity and pleasure associated with love.

The world of romance is a world free of reason. It is purely imaginative and sees life through magic casements. In pastoral romance we have a shepherd and a shepherdess as lovers. Their lives are free from affectation, worries, corruption or any indecency. The characters are also different from us, as they are denizens of not our humdrum world but
imaginary and colourful world of their own.

Romances are the last plays of Shakespeare‘s dramatic career when he himself was approaching his second childhood. He had already written comedies, tragedies, histories problem plays. He had thoroughly explored the world of human pleasure and pain, and perhaps concluded that life is only to be lived, not to be thought of. After a great innings of writing all the serious and dark plays Shakespeare gives himself a holiday.

These romances of Shakespeare are structured on tragic pattern but they end-up as comedies. In The Winter’s Tale the hero has a very serious tragic flaw. He is jealous and acts rashly in jealousy. This is fit subject for a tragedy. Leontes, the king, almost goes mad in his jealousy and develops an acute inferiority complex. It starts with a court scene showing the ideal love between friends. The love is destroyed by undue suspicion. Then the scene shifts to the countryside and Perdita comes forward as the romance queen of the remaining part of the play.

“To speak of Perdita, now grown in grace

It becomes a pastoral play when the scene shifts to the country-side. It deals with the lives of shepherds and shepherdesses in the country-side. There are songs and dances, spring festivals, wakes and fairs. Shakespeare has given a world of colour and sound. It is all festivity disguised. He simply wants to entertain and please:

“Present mirth hath
Present laughter There is nothing hereafter”.

In Act-IV of this play we have all those pastoral elements required to be called as a pastoral romance. The scene shifts from the suffocating atmosphere of Leontes’ court to the countryside where one can breathe fresh air and witness the ship-shearing festivities. The wooing of Perdita by Florizel has an intense appeal for young readers. Florizel speaks of his love in
terms of ancient myths, citing the examples of Jupiter, Neptune and
Apollo:

“Became a bull and bellow’d; the green Neptune”.

He describes Perdita as “Flora peering in April’s front”. All her acts are “queen’s”. In his eyes; when she dances, he wished that she were a wave of the sea so that she could dance forever.

“When you speak sweet

A wave O’th’ sea, that you might ever do”

Without her, life would have little meaning for him, even if he were crowned the “most imperial monarch”. Perdita loves him with an equal ardor. Her grace, charm and beauty lend an exquisite touch to the scene. She waits to have Florizel “quick and in her arms”.

The dance party starts and the Clown dances with his sweet heart Mopsa and other shepherds and shepherdesses too join in the dancing. Florizel catches hold of Perdita by the hand and begins to dance with her signing:

Your hand, my Perdita: so turtles pair

That never mean to part”.

Perdita is shown presenting flowers and garlands to the guests according to their ages. There is a whole cataloguing of different kinds of flowers. Her speech is exquisite poetry, richly sensuous, evoking all the charm and beauty of the English countryside:

“Here’s flowers for you:

The marigold, that goes to bed with sun

And with him rises, weeping:“

To complete the festivities there is the dance of twelve satyrs. The comic episodes in the play pertain to three characters – Autolycus, the old shepherd and the clown. One is amused by the clown’s trying to calculate the total price of the wool obtained from the sheep but giving up the effort because the simple arithmetical sum is baffling to his rustic wit. The manner in which Autolycus gulls him at this time and robs his money is also very amusing. Autolycus’ description of himself as a thief and pick-pocket is an instance of light comedy in the play. His posing as a courtier and robbing the old shepherd and the clown of some of their gold is also very funny. The talk the old shepherd and the clown after they have been elevated to the position of two king’s kins further add to the comic interest of the play.

Act V provides touching scenes of recognition, reunion, reconciliation and forgiveness. On the old shepherd’s producing necessary evidence, Perdita is discovered to be a princess and is united with her father. Leontes is “ready to leap out of himself for joy of his found daughter” and thinks wistfully of Hermione. He asks forgiveness of Polixenes for the for the wrong. Then there is the statue scene where Hermione is found to be still alive. Hermione’s reunion with her husband and her daughter is an even greater event. Hermione forgives her husband, embraces him, and then invokes the blessings of the gods upon her daughter. Finally Leontes announces his decision that Paulina and Camillo will get married. Thus the play has a happy ending for all, which every comedy must have. The grim past is forgotten and a new life begins for everyone.

Nor are the pastoral pictures in Act IV of the play devoid of realism. In fact, Shakespeare, in this play, does not give us an idealized picture of rural life. The sheap-shearing feast, the merry-making and dances, the ballad singing, the roguery of Autolycus and the gullibility of the clown these are true to life. Indeed, if there is any idealization in the play it is to be found in the nobility of characters like Hermione, Antigonus and Paulina. Also it is only the character of Perdita that has been idealized.

To sum up The Winter’s Tale as a pastoral romance there is a confrontation of the country and pastoral. As against the first three acts wherein we have postulation, hatred, jealousy and envy- here in we have love, harmony and sympathy. With heart-full of exuberance the hero and heroine indulge themselves in romance. The pastoral is highly idealized to such an extent that whenever we think about the play, the pastoral part resurfaces in our mind overshadowing the country part.