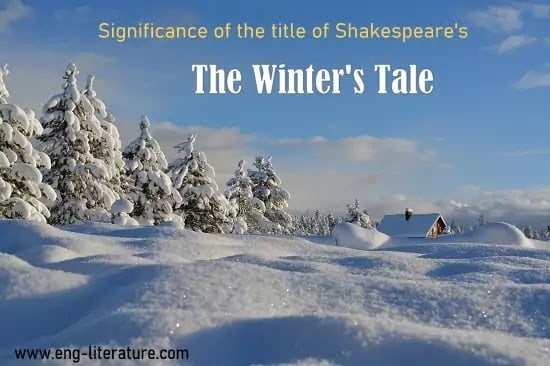 Significance of the Title of The Winter’s Tale

The title of a play should be like the signboard of a shop. Just as a signboard indicates the goods that are sold in the shop, so as a good title should give an indication as to the contents of the play, its theme, symbolism etc. Shakespeare’s titles are always well-chosen. The phrase a “winter’s tale” means an old wives’ tale, a story narrated to children in the night before they go to bed. It can be connected with some ancient legend or ballad, often exaggerated by the narrator, or it can be a fairy-tale or a story concerned with ghosts.

Here Shakespeare puts a very popular story into a dramatic form. He advertised his readers by calling this play a “tale”. So the main intention of the title may be to emphasize that this play tells an incredible story because in this play we find certain attributes of a tale. For instance tale is a fanciful, unreal and fairy thing which takes us away from the bitter realities of life. It lands us on such a realm which is imaginative. The world of The Winter’s Tale is also the world of dreamlands, of the fairy tales and of the folk-lore. Strange things happen which demand a complete suspension of disbelief. Here a prince becomes a shepherd: a shepherdess becomes a princess; a woman becomes a statue; and, a statue becomes a woman.

In the second part there are still more tale like qualities. Here we have an ideal and picturesque setting. We have a shepherd and a shepherdess. The scene which begins with a mellifluous song introduces a pastoral world to us. Before this act the story which we read is a story of tragedy, sufferings, injuries and troubles. Then suddenly scene changes and in act IV we are taken to an imaginative realm of scintillating and sublime beauty.

The play has a happy ending for all which every tale must have. The grim past is forgotten and a new life begins for everyone. So this play is basically meant to entertain the children; to provide for their sense of wonder and to ignite their imagination. The logic of The Winter’s Tale is the logic of dream because children are credulous, therefore, so speculation in necessary. Thus it has been claimed that the purpose of the title is to break the dramatic illusion and thus keep the audience detached and critical.

But this still does not exhaust the possible significance of the title. The play’s story is not only a fantastic and incredible story, it is also a tale which is primarily about winter, the winter which Leontes creates within him and around him. This is fit subject for a tragedy.

In the first part the atmosphere of the drama is marked by winter and mist, fog of suspicion, jealousy and injustice. Thus Cowden Clarke rightly remarked:

“The first portion of the play, full of chilling suspicion, bitter injustice, and cold blooded cruelty harmonises finely with the name of The Winter’s Tale”

Winter in literature stands for destruction and cessation of life, and here the winter is so cold that it does not allow an innocent flower Mamillius to bloom. The fog of this winter is so thick with the fume of suspicion and jealousy that it renders Leontes diametrically unable to see beyond this mist. So hazy the atmosphere is that it creates a smoke-screen between ‘Leontes and truth. The air of vanity, arrogance and pride blind him to reality. Some of the incidents such as the trial of Hermione in the open court, the casting away of Perdita, mighty tempest in which the ship is wrecked, send a shuddering sensation through the veins of the reader.

The play is indeed a winter’s tale set in a chilling atmosphere of winter. Now the question that surfaces in our mind for answer is why Shakespeare calls it The Winter’s Tale and not ‘Winter’s Tale’. There is a remote possibility that he may want to refer us to the tale narrated by Leontes’ son Mamillius at the opening of act II.

Hermione: Pray you, sit by us,

And tell’s a tale

Mamillius: Merry, or sad, shall’t be?

Hermione: As merry as you will

Mamillius: A sad tale’s best for winter: I have one of sprites and goblins.

But the play may have deeper significance also. It may be interpreted as depicting the conflict of evil and good, in which the good triumphs in the long run. Evil is represented by Leontes and good by Hermione, Paulina and other Characters of the play. The play does begin in winter but ends in spring where there is regeneration and renewal of life. So the title expresses a vital philosophy of creation and growth as well.

In conclusion we can say that the title The Winter’s Tale can be interpreted in many different ways. It may be taken as a reference to the tale like quality of the play; it may be a reference to the winter which we observe in the first half of the play; it may have symbolic meaning; and it may have any deeper significance also. So the relevance of the Winter’s Tale title is quite suitable and suggestive.