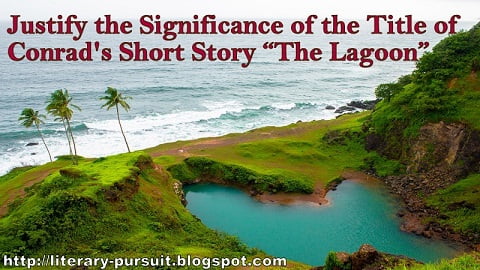 Title of Joseph Conrad’s The Lagoon

Literally, ‘lagoon’ (from Spanish ‘laguna’) is a salt-watered shallow lake partly or fully isolated from the sea (or the river of the lake) by sand banks or coral reefs.  Here in Joseph Conrad’s short story “The Lagoon” with a typical Malayan setting serves as a befitting background against which is narrated a tragic tale of love and despair. The ‘lagoon’ stands for human frustration and the utter illusion of the world in which there is

“no light and no peace”, “but there is death, death for many”.

Conrad does not name his short story after any of its important character (e.g. Arsat, Diamelen). Rather he selects a precise title for his story. The entire theme is set against a gloomy, stagnant, and weird-looking lagoon. The main events centres round this lagoon, for the hut of Arsat, hero of the story. Here, by the side of the abandoned lagoon, Arsat nurtured his loves for his darling Diamelen.  Arsat and Diamelen also remain separated from their Malayan relatives and neighbours. Their sense of isolation has thus been deepened by the use of the lagoon as a setting of the story.

Again the water of the lagoon is salty and hence unfit for drinking purposes. In the same way Arsat’s hope of enjoying a happy life with his sweetheart (for whom he betrays his blood brother) is completely blasted. Diamelen’s sudden and premature death made his life as bitter as the salt water of the lagoon.

The author had beautifully sketched lagoon from sunset till sunrise. The changes through which he passes help us to scan the progress of time and to mark the changes Arsat’s mood. As the night advances a mist creeps over the lagoon ‘erasing slowly the glittering images of the stars’. Now ‘a great expanse of white vapour covers the land’. Arsat’s brain also seems to be under the stress of vapour, deception and illusion. He is in search of such a country where death is forgotten and unknown.

The night comes to an end. A brand new day deigns with the new sun. The mist lifts and vanishes into flying wreaths. The sun shows its edge above the tree-tops rising steadily. The breeze freshens; a great brilliance bursts upon the lagoon and sparkles the rippling water. Arsat’s mood is also in harmony:

He stood lonely in the searching sunshine; and he looked beyond the great light of a cloudless day into the darkness of a world of illusion.

In the light over the lagoon he sees his course unclear: to go back to his native land and to strike against the enemies as retribution for the death of his brother.

The lagoon also serves some symbolic functions. First, it alike a miniature universe, totally unconcerned about the joys and sorrows of tiny human beings inhabiting in the earth. Secondly, the lagoon represents the very heart of Arsat.  Murmurs and whispers, mist and vapour, stillness and gloominess, illusion and deception far outweigh the other features of the lagoon. Similarly Arsat thought he would be happy with Diamelen and love would triumph over his brother’s death. But an acute sense of guilt robbed him of his love, and Diamelen’s death robbed him of his utility of existence.

The title of the story is related to the environment as well as the events in Arsat, the protagonist’s life. It has, in fact, a symbolic suggestiveness , an environmental effect and well bears out the brooding, gloomy spirit of the tragic tale of love and death.