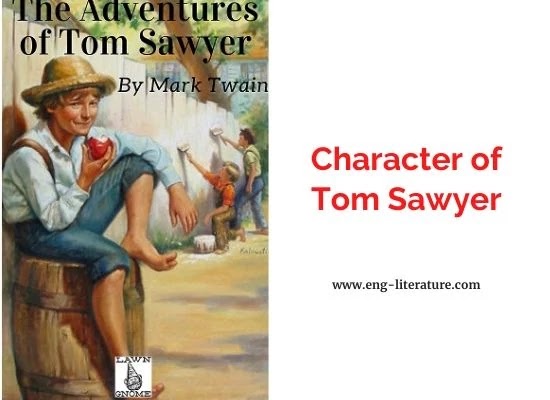 “Tom was a glittering hero once more—the pet of the old, the envy of the young. His name even went into immortal print, for the village paper magnified him. There were some that believed he would be President, yet, if he escaped hanging.“

– Narrator, The Adventures of Tom Sawyer

The title hero of Mark Twain, Tom Sawyer, an approximately 12-13 year old boy living in a small town in Missouri is the titular protagonist of the novel The Adventures of Tom Sawyer. His true blood relatives deceased for unknown circumstances. He is cared for by his Aunt Polly, along with Sid and their family feline. He is well-known friends with the social outcast Huckleberry Finn and the neighborhood child Joe Harper. The Mississippi River, which runs very close to the town, is often the center of the excitement. The story is about how Tom grows up in the small town and the adventures he and his friends have.

Tom is lovable and infuriating at the same time. He is a typical little boy who loves adventure, but hates church, school, and chores.

His imagination often gets him into trouble because he follows his impulses. He created a huge debacle in church when the pinch-bug he was playing with wreaked havoc on the sermon. Some of his adventures being the time he ran away to play pirates on the sandbar of the Mississippi River and hanging out in the cemetery with Huck at midnight.

Tom has a huge crush on Becky and will get into trouble just so he can sit by her. Tom is not adept at formal education, yet he is by no means stupid. He bends rules but understands the difference between right and wrong when it counts. This is evident in how he helps Becky when she is in trouble with the schoolmaster.

Tom is a character of unflagging energy and a real zeal for trickery. When the novel begins, Tom is a mischievous child who envies Huck Finn’s lazy lifestyle and freedom. As Tom’s adventures proceed, however, critical moments show Tom moving away from his childhood concerns and making mature, responsible decisions. These moments include Tom’s testimony at Muff Potter’s trial, his saving of Becky from punishment, and his heroic navigation out of the cave. By the end of the novel, Tom is coaxing Huck into staying at the Widow Douglas’s, urging his friend to accept tight collars, Sunday school, and good table manners. He is no longer a disobedient character undermining the adult order, but a defender of respectability and responsibility. In the end, growing up for Tom means embracing social custom and sacrificing the freedoms of childhood.

Tom is throughout a leader in the games and adventures in which he and his friends are involved. He has a romantic imagination and absorbs tales of pirates and heroes like Robin Hood. Tom‘s leadership ability is tested when he is able to get other children to do his whitewashing for him by making the job seem like a rare privilege.

Yet Tom’s development isn’t totally coherent. The novel jumps back and forth among several narrative strands: Tom’s general misbehavior, which climaxes in the Jackson’s Island adventure; his courtship of Becky, which culminates in his acceptance of blame for the book that she rips; and his struggle with Injun Joe, which ends with Tom and Huck’s discovery of the treasure.

The picaro boy, Tom is a paradoxical figure in some respects—for example, he has no determinate age. Sometimes Tom shows the naivete of a smaller child, with his interest in make-believe and superstitions. On the other hand, Tom’s romantic interest in Becky and his fascination with Huck’s smoking and drinking seem more the concerns of an adolescent. Tom is a memorable character whose mischievous tendencies do not detract from his likability.