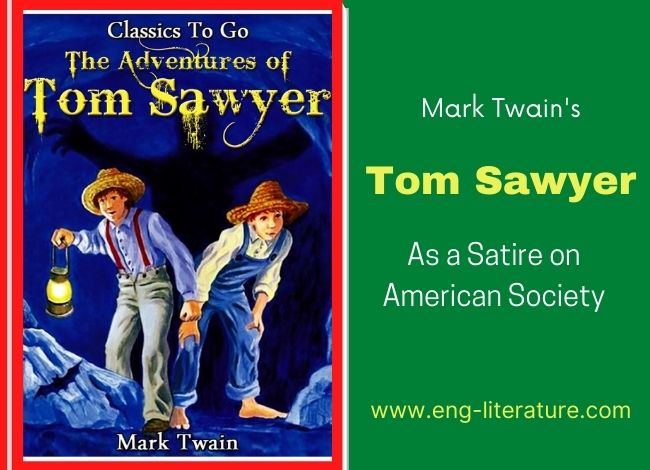 The Adventures of Tom Sawyer, first published in 1876, is apparently a child’s adventure story. It is a type of bildungsroman in which Mark Twain narrates the moral, psychological and intellectual development of Tom, the child protagonist of the novel. But it would be oversimplification to say that Mark Twain’s Tom Sawyer is a collection of episodic adventures; rather the novel is a vivid record of an important part of American civilization under the garb of absorbing juvenile adventures. Twain here depicts the contemporary decadent American society through the adventure of the energetic romantic minded children.

The world of Tom Sawyer is mainly the childish world of fantasy. Placed against a sombre background of the 19th century American background is a complex society for children.  The contemporary society mainly viewed through the eyes of children, is a society of crime and punishment. The society of St. Petersburg is an orthodox society of strict discipline and rigid rules where the children can hardly enjoyed a life of freedom and imagination. The children like Tom, Joe, Becky, Huck, Jim can rarely pursue their childhood fascination.

Aunt Polly is a typical product of this society. In the very opening of the novel Aunt Polly is seen to be punishing Tom by assigning him the unpleasant task of whitewashing the fence. Thus it is a world of matriarchy, a world that hold small boys in bondage. Therefore the voyage of tom, Huck and Jim to the Jackson’s Island is symbolic of their rebellion against their society of slavery and bondage.

Although Mark Twain’s The Adventures of Huckleberry Finn, which is a sequel of Tom Sawyer contents a severe criticism of slavery and racism, Tom does not totally disregard the issue of slavery and racism. The presence of Jim, a negro slave, and his attempt to escape Aunt Polly’s house along with Tom and Huck obliquely refers to the formation of society free from racial and social segregation. The novel also touches upon the issue of cultural conflict between the southern and the western provinces of America.

Widow Douglas’s attempt to ‘civilize’ Huck suggested that St. Petersburg is founded on a stiff systems of regulation which she tries to make natural through the sub-version of culture. Thus the novel deals with the racial and cultural conflicts that characterizes the 19th century American Society.

The novel projects a society disturbed with moral anarchy and the breakdown of the legal system. It is a world in which crimes, lawlessness and violence are omnipresent. In the episode where Doctor Robinson, Muff Potter, and Injun Joe meet in the cemetery, Dr. Robinson was murdered by Injun Joe. But in the trial of Muff Potter Injun Joe succeeds in escaping from court room, which exposes the horrible condition of the legal system in contemporary America. Along with the portrayal of the faculty and hollow legal system, the novel portrays a society of hedonistic people, who pursue relentlessly after wealth and treasure immorally. So it is a chaotic world that Twain presents in his novel.

Mark Twain is presenting a world of social, moral and legal degenerations not simply because fun and entertainment. He is writer with serious social messages. So what lies beneath this presentation of the chaotic picture of society is a serious criticism of the cultural ethos and the legal system of the19th century American Society. Through the novel he satirizes the decadent matriarchal society, custom of slavery and racism, legal system and other immoral practices of the day. So Twain’s Tom Sawyer should not merely be considered as a adventure story; it is rather a truthful account of the history of the contemporary American.