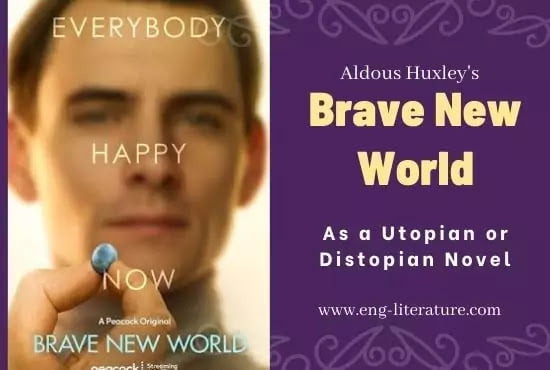 The word ‘Utopia’ means an imaginary place or society with a perfect social and political system, or an ideally perfect state of things. This word was used by Sir Thomas More (1478-1535) as the title of his book, Utopia in which he depicted an imaginary commonwealth. He coined this word by joining two Greek words –‘outopia’ (no place) and ‘eutopia’ (good place) – and making them yield the meaning of a good place which does not exist or is imaginary.

In the course of time, the word came to signify a kind of fiction portraying an ideal political state and way of life. Plato’s Republic, describing an ideal commonwealth or state, is the first work of this type. Then there came to be written various books right from More onwards on the subject of or dealing with an ideal imaginary world with a perfect political or social system in order to present an ideal before the modern man to follow.

These utopian works were usually set against the background of a distant country and gave a fictional account of life lived there. These works were of both types, fictional and non-fictional. They comprise New Atlantis by Francis Bacon, News From Nowhere by William Morris and Lost Horizon by James Hilton. Famous writers of fiction such as Swift, Butler and Wells presented a utopian picture of a distant land or an imaginary world of future to satirize the world around them. The world presented by them was usually an ideal place and the picture of it a pleasant one. But there were also some utopian works that presented a negative vision or an unpleasant picture of the world. These works were called anti-utopian or Dystopian.

Huxley has written both the utopian and the ant-utopian works of fiction. His last novel, Island is a work of utopian fiction depicting an ideal world where peace, joy and love prevail, and people lead a happy and serene life. However, his novel Brave New World is an anti-utopian work, because he has presented a picture of the future world which is extremely gloomy, dismal, depressing and repulsive. It can be regarded as a utopian novel because it projects an imaginary world of future, but it is anti-utopian in that this world is simply disgusting, and not an ideal or alluring one as we find in a work of utopian fiction.

Brave New World, along with Island, forms Huxley’s contribution to the English Utopian fiction. Written in the utopian tradition of More’s Utopia, Morris’s News from Nowhere and Well’s Men Like Gods, it projects a vision of future based on the realities of the present. However, unlike those utopian works, which present an ideal or exemplary vision of future of an imaginary world, it presents a dismal and gloomy picture of future, and is therefore anti-utopian or dystopian in nature.

Moreover, it is a great satire on the present-day world through the presentation of a future world. As F.R. Karl and Marvin Magalaner remark,

“In Brave New World, Huxley wrote his most Swiftian of satires, giving the same plausibility to absurdity that Swift conveyed in the demonic logic of A Modest Proposal.”

As an outstanding work of science-fiction, this novel brings Huxley in the line of writers of science-fiction, such as Jules Verne in French and HG Wells in English. Keith May aptly calls it a “satirical utopian (or dystopian) science fiction.” (Aldous Huxley, p. 99).

In Brave New World, Huxley presents a utopian future based on science and technology. He shows the conditions in the future world which is governed by latest developments in the field of science, and has little to do with human emotions and morality. In this world, babies are ‘decanted’ in laboratories, and so conditioned as to be unable to develop any natural sentiments like love, hate, loyalty, etc. As Anthony Burgess points out,

“In Huxley’s future world-state, children are bred artificially and made, in the very test-tube, content with whatever the State bestows on them. Human beings are graded like examination results: the Alphas do the intelligent work and the Deltas are the sweepers and cleaners. There is not much to do and there are manifold pleasures, chief of which is sex, though a sex totally dissociated from the act of reproduction. There is no crime, there is no immorality science had bred out the destructive clement in man. This is a real Utopia, dedicated to the pursuit of happiness.”

In contrast to this world of material well-being, which is represented by Mustapha Mond, there is the world represented by John, the Savage, who derides this world and is opposed to its values and conventions. “The Savage”, remarks Anthony Burgess, “rejects the new sinless and happiness seeking order; he thinks that man ceases to be man when he is incapable of squalor, shame, guilt and suffering. A world in which there is no family hierarchy, no dignity in birth and death, and perhaps worst of all-none of the human conditions which can produce a Shakespeare is the terminus of scientific progress. What is Utopia to people he is thrown among is its opposite – Dystopia-to him. He crucifies himself for the sinlessness of the world.” (Ibid. p. 41)

In fact, we also feel what the Savage feels, i.e., the world presented by Huxley in this novel is neither new nor brave; it is the product of a disgusting vision of the world, which can be called utopian only ironically. Actually it is an anti-utopian world ushered in by man’s excessive subservience to science. There is hardly anything pleasant or edifying in it. Normal human emotions and relationships have been banished from it.

What remains is the beast-like enjoyment of physical pleasures and slavish adherence to the directions of the State. This is actually an anti- utopia or an unpleasant and disgusting state of being which is far from being an ideal or perfect state to be cherished by man. Thus, Brave New World is an anti-utopian novel presenting a negative vision of future, and not a utopian novel embodying a positive vision as is found in Island.

The Huxleyan vision presented in Brave New World may be disgusting, but it is an authentic vision as is proved by the fact that it has turned out to be true much earlier than he had imagined. Huxley had himself observed in his Foreword to the novel that man had moved in the direction of this utopia more rapidly than anyone could have imagined. He writers —

“It looks as though Utopia were far closer to us than anyone, only fifteen years ago, could have imagined. Then, I projected it six hundred years into the future. Today it seems quite possible that the horror may be upon us within a single century.”

In this respect, Aldous Huxley’s Brave New World can be regarded as a prophetic work, which prophesies an anti-utopian future for man which is sure to come if he continues to run after temptations offered by science and progress, and to ignore the call of his spirit or the voice of basic human nature.