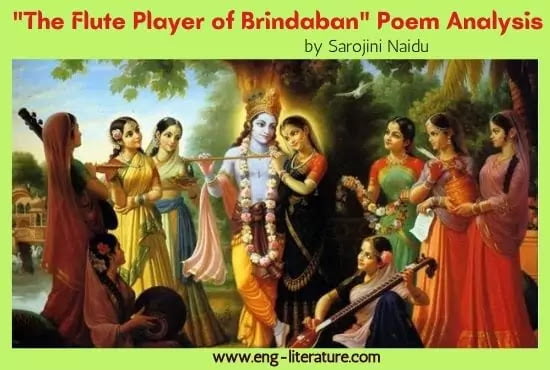 ‘The Flute Player of Brindaban’ is Lord Krishna who, according to Hindu mythology, was the incarnation (avataar) of Vishnu, one of the gods of Hindu trinity, the other two being Brahama and Maheshwar (Lord Shiva). Traditionally it is believed that Lord Vishnu comes to the world in incarnation to destroy evil when it becomes too powerful and dominant to be controlled by mere human forces.

Lord Krishna had the twin aims to root out evil and also to purge the society of the many evil customs and practices that were then prevailing. He wanted to reform and improve the world morally as well as socially. He taught the doctrine of Karma which is the cardinal principle of Hindu theology. His love for Radha, glorified in literature with high-flown sentiment and luxury of detail, symbolizes the union of the human soul with the divine. He was also an adept at playing on the flute and produced very sweet and haunting tunes on it which enraptured the hearts of the listeners. Krishna, the Divine Flute-player of Brindaban, who plays the tune of the Infinite that lures every Hindu heart away from mortal cares and attachments.

The Flute Player of Brindaban is a beautiful love lyric in which the beloved seeks a spiritual union with her lover. It shows the combined power of music and love on human beings. The love dealt with in the poem is of the highest order and becomes synonymous with devotion. It is a form of worship. The beloved is actually a devotee of Lord Krishna (may be Radha) who has been greatly enchanted by the sweet and mellifluous tunes of his flute.

The tune of his flute is the tune of the Infinite, and has a divine power and charm in it. The beloved is bound to it as if by magic and can never be separated from it. She loses all interest in this earthly life, and must sever herself completely from all “earthly loves and worldly lures.” She has now no individuality of her own and wants only spiritual union with her lover. The tune of the flute has transported her to ecstatic raptures, and given her a new experience which she never had before.

It has also given her a new courage and she has now no fears in her heart. In response to the call of the flute she will go to the ever-blooming garden of Indra, the god of rain, or to the dark and dismal courts of Yama, the dreaded god of death. No peril of the “deep or height” can stop her from following it. Nothing now matters to her light or dark, pleasure or pain, comfort or discomfort have no meaning for her. Any distance, even to infinity, cannot deter her swift movements, she must follow the music wherever it might lead her to.

The poem exalts the value of music in the spiritual life of man. Music is the “food” of love. It has limitless power to touch the deepest cords of man’s heart, and give a greater depth and poignancy to his feelings of love. In this poem the beloved realizes the great power and value of music and love. What is true love? True love is pure, simple and guileless, and aims only at the union of the lover and the beloved. It is firm, unshakable and permanent. It is unchangeable, and not affected by time. As Shakespeare, the immortal poet of the Elizabethan age says in a sonnet;

Love alters not with his brief hours and weeks,

But bears it out even to the edge of doom,

Unity is the law of nature. A life of isolation, therefore, is against nature and has no value. It is the philosophy of love, it is the law of the universe. As Shelley, the angelic poet of the Romantic age, says:

Nothing in this world is single:

All things, by a law divine,

In one another’s being mingle,

Why not I with thine?

According to the highest religious view the ultimate goal of the human soul is to be united with the Eternal, or, as Browning says, in Rabbi Ben Ezra, to ‘slake’ the thirst of God.

The Flute Player of Brindaban is a charming lyric – it is simple, musical, and spontaneous, and expresses the emotions of the speaker directly and vividly. It is remarkable for its apt and flawless diction. It is full of highly expressive and suggestive words, phrases, and images. The word ‘wound’ suggests ecstatic raptures which sometimes convert into a feeling of pain. The imagery of the “homeless bird” is very apt and appealing. A bird without a nest will always be flying here and there, without staying for long at any one particular place. The beloved, after severing all ties with the world, must wander all round in search of home for her. She will drink the “nectar” of Krishna’s flute and become immortal.

The stanzas are in iambic metre of four feet and three feet alternately and the whole poem makes a very deep und permanent impression on the reader.

The Flute Player of Brindaban Line by Line Analysis

kadamba- a large, lush green tree, very dear to Lord Krishna, under which he used to play his flute.

a homeless bird- a wandering bird having no nest of its own.

lures – anything that attracts, tempts, or entices; here it means the attractions of the world that kept her in bondage, or bound to the earthly life.

groves- gardens. Indra’s golden-flowering groves reference to the Nandan garden of Lord Indra in heaven where beautiful and sweet-smelling flowers bloom throughout the year.

Yama- the god of Death in the underworld.

silent courts- In the kindly courts of the Lord of Death endless silence prevails as it is the abode of the souls of the dead.

lampless woe- dark sufferings. The underworld has been depicted as dark and dismal where an atmosphere of sadness and dejection prevails,

route- way from one place to another.