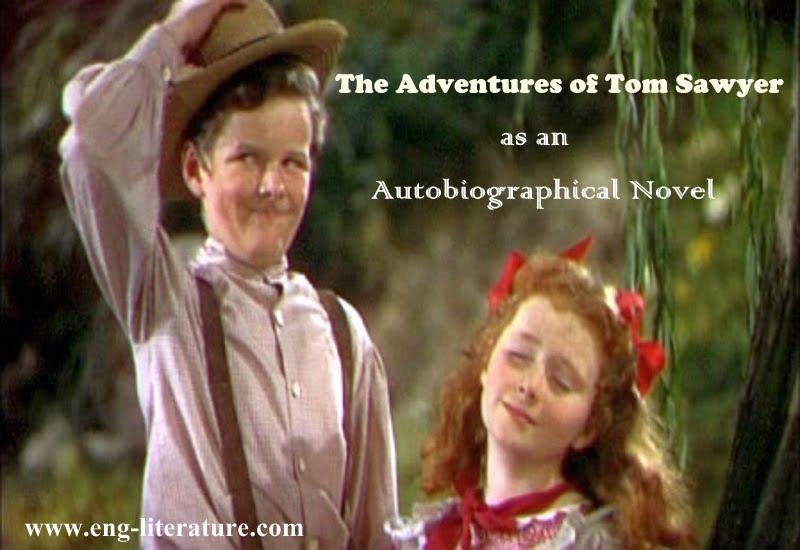 The Adventures of Tom Sawyer as an Autobiographical Novel

Mark Twain’s The Adventures of Tom Sawyer is one of the classics in American literature. The novel is apparently a child’s adventure story in form of a bildungsroman, a type of novel whose principal subject is the moral, psychological and intellectual development of a youthful protagonist. The novel remain an eternal favourite as it appeals to both the children and the adults for the adventures that are intriguing and delightful and they appeal to the basic instincts of all regardless of time and culture. The plot of the novel narrates the growth and maturation of Tom; but what is most striking is that behind the narrative of Tom Sawyer, Twain speaks his own life-story. David Copperfield is often described as the autobiographical novel of Charles Dickens. In the same fashion, perhaps, be not wrong to say that Tom Sawyer is a fictional autobiographical narrative of Mark Twain.

Mark Twain was born in Florida, Missouri in 1835, and grown up in nearby Hannibal, a small Mississipi river town. Hannibal becomes the model for St. Petersburg, the fictionalized setting of Mark Twains two most popular novels, The Adventure of Tom Sawyer and The Adventure of Huckleberry Finn. The River Mississipi plays an important role in the novel. The structure of the book is largely depended on the river Mississipi which flows continuously by affecting the life of Tom, Huck, Jim and by bringing before the reader an overall and comprehensive pictures of heterogeneous American culture on its shore. The river has its living presence in the novel. The river plays its symbolic function as well as its structural role most effectively in the novel because of Twain’s personal experiences of the various facets of the river Mississipi.

Twain based the novel largely on his personal memories of growing up in Hannibal in the 1840s. In his preface to the novel, he states that “most of the adventures recorded in this book really occurred” and that the character of Tom Sawyer has a basis in “a combination of…three boys whom I knew”. Indeed, nearly every character of the novel comes from young Twain’s village experience- Aunt Polly shares many characteristics with twain’s mother; Merry is based on Twain’s sister Pamela; and Sid resembles Twain’s younger brother, Henry. Huck Finn, Widow Douglas, and even Injun Joe also have real life counterparts.

The structure of the novel is broadly episodic because Twain composed the novel on three memories of his childhood which came to mind, waited until he remembered some more, and then added them to his manuscript. The episodic nature of the novel therefore suggests that the novel is based on his childhood memories. In fact, in his preface to the first edition Twain wrote “Although my book is intended mainly for the entertainment of the boys and girls are part of my plan has been to pleasantly remind adults of what they felt and thought.” So the novel is the combination of the past and the present of well remembered events from childhood told in such a way as to evoke remembrance in the adult mind.

The actions and the places narrated in the novel become lively as they have close resemblances with the events of Mark Twain himself. The young Twin grew up in a prosperous family but he was sent out to work at the age of twelve after his father’s death. As a young man he travelled frequently as a stream boat pilot. In that profession he became familiar with river life that furnishes much material for his writing.  The Jackson’s island narrated in the novel is an actual island located near St. Louis. The cave that Injun Joe inhabited still exists, as for the houses that Widow Douglas and Aunt Polly inhabited.

So the characters and places and events narrated in the novel have their autobiographical significance; but Twain has transformed them into fictional objects to make Tom Sawyer a classic example of fictional narrative with realistic overtones.