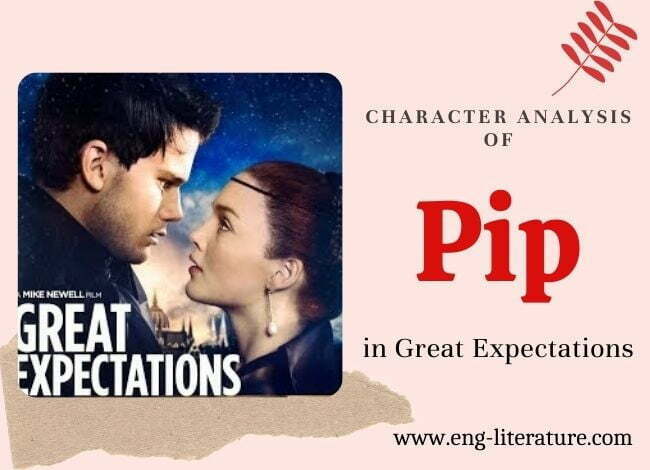 Pip is an orphan. As such he has no expectations. Because of Joe’s kindness, he is taken in, cared for, and permitted to anticipate following Joe’s footsteps as his apprentice. The promise of a great inheritance and the failure of it are the theme of the story, and Pip is the recipient of that great expectation. It is on account of the great expectations that Pip undergoes through psychological changes in his adventurous life. He becomes snobbish and keeps himself aloof from his erstwhile poor relations and leads an idle and foolish life. When the inheritance slips out of his hands he comes to realize that life is far more enjoyable when it is lived and maintained with honest work, Miss Havisham and Magwitch play very important roles in his life.

Miss Havisham was a rich and eccentric lady. She possessed a big house which was named ‘Satis House.’ It was also called ‘Manor House‘. At Miss Havisham’s, Pip met a girl whose name was Estella. Miss Havisham had a broken heart and was weary of life. She told Pip that she wanted diversion; therefore she wanted Pip to play there. Miss Havisham had adopted Estella and has made her a proud girl. She encouraged Estella to show love towards men and then reject them. This way Miss Havisham took revenge from men of fashions and felt sadistic pleasure. She was herself betrayed by her lover. That is how she designed this scheme to betray men. Pip was entrapped likewise.

Pip was attracted by the beauty of Estella. He tried to make himself refined in order to win over Estella. Even after becoming apprentice to Joe he kept on going to Havisham’s house to meet Estella. Mr. Jaggers came and promised great expectations to him. It was planned that he should go to London and get good education. While he was delighted at the idea of better prospects, he was at the same time suspicious of Miss Havisham’s conspiracy of separating him from Estella. He became a little unbalanced and swollen-headed.

In London Pip found a kindred spirit in Herbert. Pip began to live expensively as the scion of a wealthy family naturally would. He had a friend and a rival Startop and Drummle. He tried to behave as a rich man and show off. He joined the Finches Grove, had his own boat on the Thames and wore rich dresses and gave expensive dinners. He was actually leading a foolish life. However, he did not do anything mean or impious. He behaved towards Joe in a snobbish and ungrateful manner. It was nice of Joe that he realised the play of the circumstances and swallowed the insult and forgave Pip.

Although Pip became snobbish under the circumstances yet essentially he was a good hearted person. When he got his allowance on attaining majority, the first thing he did was to buy with that money a partnership in Clarrikar Co, for his friend Herbert. His kindness was explicit on many other occasions also. This was ingrained in him. Even as a child he had been good to Magwitch, and he was duly rewarded for that. He could help a man in distress even at a great peril.

Pip and the Convict

When Pip came to know that his real patron was Magwitch, a convict, he was shocked. He did not like to use the money that came to him from a convict. He hated every kind of help from an impious source. When Magwitch gave him a pocket book bulging with banknotes, he did not touch the money and sent it back when actually he needed it most. Although he did not accept the money, he did his best to help the convict in his hour of need. He very much appreciated how the criminal had endangered his life for his sake. It was a great ordeal that he tried to do his best to help Magwitch escape from the clutches of the police. It was a different matter that the unfortunate man died in clash with the pursuers. Pip was sad. He felt the death of the convict deeply in the heart of hearts.

Pip was generous and a man of helping nature. Himself a self-respecting man he would not ask for anything from Miss Havisham, but for the sake of Herbert he won’t mind begging her to help Herbert. When the lady wants to help him herself he plainly refuses. Pip has a passion for reading and improving himself intellectually. This shows that Pip was unselfish and was ever prepared to help others in their hour of distress.

Pip’s conduct was magnanimous towards Miss Havisham who had been wholly responsible for separating Estella from him. He tried to save Miss Havisham’s life although. She had destroyed his happiness. When Joe came to see him during his illness he apologized to him for his misbehavior in the past. After the marriage of Joe with Biddy he planned to go to Cairo to work as a clerk under Herbert whom his bounty had made a partner of Clarikar and Co.

Pip had now fully realised that an honest bread earned with the sweat of the brow was sweeter than delicacies procured with ill gotten wealth. He was an upright man, indeed despite so many shortcomings that developed in him during different circumstances.

In the light of the above discussion we come to the conclusion that congenitally Pip is an upright man, kind and considerate, generous and of helping nature, honest, self respecting, sincere and a man with certain ingrained qualities of head and heart. Some great expectations thrown in his way take him to be swept away by some wrong notions about himself. But ultimately he comes to realise the value of self-help, of standing on one’s own legs, of earning one’s own livelihood. It is a fitting tribute to such a man of so loving a nature that at the end he succeeds in winning the love of the woman of his choice. Dickens ends the novel, Great expectations in a dramatic manner with Pip and Estella meeting again, after the death of Miss Havisham, on the ground’s where Satis House once stood.