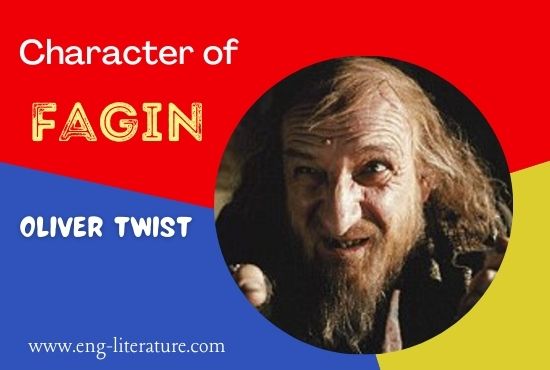 Fagin: A Representative of the Criminal World

Fagin is the old man who provides shelter to Oliver on his arrival in London. The Artful Dodger who meets Oliver on the outskirts of the capital takes him to Fagin. Fagin is the leader of a gang of young pickpockets, who also deals in stolen goods and is quite willing to undertake any other villainy that might offer him some material benefit. The Dodger, Charley Bates, Tom Chilling and later Noah Claypole work for him. All these boys are engaged in pick-pocketing. With Sikes, he plans robberies. It is Fagin who is entrusted with the job of converting Oliver into a criminal by Monks.

Frying sausages over the fire in the filthy room of a dark house on a slum street, Fagin appears ‘a very old, shriveled Jew, whose villainous looking and repulsive face was obscured by a quantity of matted red hair’. When we first hear of him, he is referred to as a merry old gentleman and later a number of other epithets like ‘kind’, ‘merry’, ‘pleasant’ or ‘playful’ are applied to him. This initial inference is reinforced by his habit of calling everyone ‘my dear’. But Fagin is one character who is painted in different shades on different occasions.

Throughout the novel Fagin is described in terms of animal imagery. In chapter 19 Dickens writes,

“As he glided stealthily along, creeping beneath the shelter of the walls and doorways, the hideous old man seemed like some loathsome reptile, engendered in the slime and darkness through which he moved: crawling forth, by night, in search, of some rich offal for a meal.”

The expressions ‘glided stealthily’, ‘creeping’, ‘loath-some reptile’, ‘slime and darkness’ remind us immediately of Milton’s serpent, the ultimate corrupter of mankind, the devil incarnate. So for Dickens, Fagin is the very essence of evil. As Satan corrupted Adam and Eve and caused their fall from paradise, Fagin corrupts innocent children, converts them into thieves and pickpockets and permanently condemns them to the accursed underworld, In chapter 44, Sikes calls him a wolf and in chapter 47 when we see him biting his nails, he discloses among the toothless gums ‘such fangs as should have been or rat’s’.

Fagin: A Figure of Darkness

Apart from being described as a beast, Fagin has also been portrayed as a creature of darkness, who lurks in the streets by night and spends the day indoors. It is remarkable that we rarely see him in daylight. In chapter 18, Oliver explores his house and he finds all the windows tightly closed and

“the only light which was admitted, stealing its way through the round holes at the top: which made the room more gloomy, and filled them with strange shadows.”

During his trial, in chapter 52, we see him for the first time in a blaze of light. But this Light simply sets off the darkness of his nature. In his condemned cell, he longs for light until they bring him a candle. But by then he has lost all human identity.

Fagin as a Jew

Dickens has made Fagin a Jew and throughout the novel he identifies himself as ‘a Jew‘. This might give one a feeling that Dickens was against the Jews. He was himself once questioned on this point. But he said that he had no such feelings of anti-semitism. Fagin is never attacked as a Jew, he is attacked as a criminal. Dickens simple takes it for granted that a typical receiver of stolen goods in London at that times would be a Jew.

Fagin is the focal point of the criminal activity with a number of juvenile delinquents hovering around him. On the surface he talks very politely, but basically he is a heartless schemer. When he finds it difficult to stand the humiliating behaviour of Sikes he decides to make Nancy an instrument in his destruction. He sets Noah Claypole as a spy on Nancy and when he realises that Nancy has disclosed some of the vital secrets to Mr. Brownlow, he incites Bill Sikes to murder her. The tact with which he provokes Sikes is an evidence of his scheming nature. He also contrives a scheme to convert Oliver into a thief. He doesn’t trust anyone and he has no sympathies for anybody. He is a shrewd and cunning master-mind with a brilliant philosophy which he calls the philosophy of number one.

Angus Wilson says that Fagin is the evil spirit that always keeps hovering around Oliver. Fagin, sums up as ‘looking after number one’