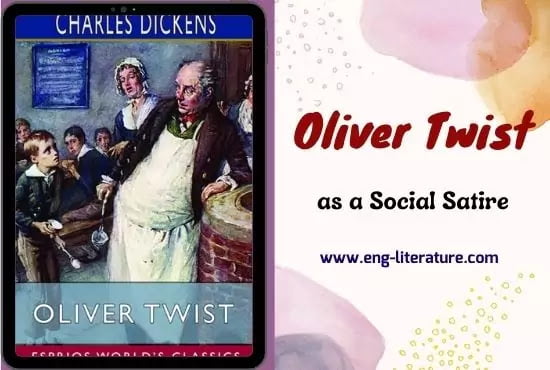 Charles Dickens‘s dissatisfaction with the prevailing social conditions and his zeal for social reform led him to satirize the social institutions. Oliver Twist is an attack on the inhuman conditions of subsistence in the workhouses, the idiocy of law and the unsatisfactory medical facilities Dickens wrote with a feeling and though the pungency of his satire is occasionally mellowed down by humour, it retains its sharpness.

Much of the satire in the first eleven chapters of Oliver Twist is directed against the Poor Law Amendment Act of 1834. This act was intended to be a reform, instead it worsened the situation. On the one hand it abolished the benevolent Speenhamland System whereby a labour’s wages were supplemented to the subsistence level driving him to pauperism and finally to the workhouse, while on the other it made the living conditions in the workhouses very hard in order to keep away able- bodied people from them. This hardship was effected through the sparse diet given at the workhouse, the separation of families on entering it, the lack of exercise, and the repulsive nature of the work done in the workhouse. In passing, Dickens also mentions the inadequate medical facilities and other general services offered at the workhouses.

Sparse Diet in the Workhouse

The most inhuman ‘economy’ measures of the new Act was the sparse diet provided to the inmates of any workhouse. Dickens tells us that in the eyes of the board, the workhouses had become a regular place for public entertainment so they decided to set things right. They contracted with the water works to lay on unlimited supply of water and with a cornfactor Supply periodically small quantities of oatmeal and issued three meals of thin gruel a day with an onion twice a week and half a roll on Sundays.

In chapter 2, where we have the famous scene of Oliver asking for more we are told that the bowls in which gruel was served never wanted washing. This was calculated slow starvation.

In baby farms or branch workhouses where children from the tender age to that of fifteen were kept, there were very poor arrangements to look after them. In the farm where Oliver was kept, Mrs. Mann, the elderly lady in-charge of it was given seven pence half penny per small head per week. Mrs. Mann was a very great practical philosopher. She was a woman of wisdom and experience. Lest the children have their stomach overloaded and be uncomfortable, ‘she appropriated the greater part of the weekly stipend to her own use’. Occasionally, children would be crushed under a bedstead or even scalded to death through sheer negligence.

Dickens also satirizes the lack of healthy exercise in the open air for the farm children and the incompetence of the parochial surgeons. Work in the farm houses consisted of stone-breaking, bone-crushing or oakum-picking. Dickens tells us that since the parish doctors were appointed upon a public competition basis, they were usually the cheapest and most inexperienced doctors. It was such a doctor who attended on Oliver’s mother.

Another public institution that is subject to scathing satire is the court and its indiscreet doling out of laws. Satire here is coated with much farcical humour. In chapter 3, the magistrate, with absolute unconcern is about to sign, the indenture that would seal the fate of Oliver, when he catches a glimpse of the pale and terrified face of the child. The indenture is tossed aside. But it is in Mr. Fang’s court that we get a taste of the utter stupidity and preposterousness with which cases were decided. The magistrate is presented in his utmost impoliteness and callousness to the suffering wretches that come to him vainly seeking justice. Besides, there is Mr. Bumble proclaiming ‘the law is a – ass a idiot’, and the Artful Dodger stubbornly refusing to say anything in his defence because the court ‘ain’t the shop for justice’.

There seems to be an indirect satire on the incompetence and ineffectiveness of the police system, for there are Fagin and Sikes operating right under the shadow of the police and they seem to enjoy perfect immunity.

Satire did not Lead to any Effective Legislation

There are but a few observations to be made about Dickens’s satire. His satire reveals his awareness of and involvement in the social conditions of his times as well as his humanity. It would be too much to expect any legislated reform to be effected as a sequel to a determined crusade in the sphere of literature. In fact the government adopted an attitude of pathetic indifference towards reform during the period 1832-70. A Royal Commission was appointed to look into the Poor Laws only in 1905. The department of Public Health was reorganised in 1866 after another epidemic of cholera had swept the city and the civil service was revitalised in 1870. But it does not in any way depreciate or discount the importance of Dickens’s work. His writings created an atmosphere of public awareness. His appeal was to the human heart and he definitely influenced the emotional attitudes of thousands of people towards the social problems.

George Orwell points to the utter lack of constructive suggestions in Dickens’s work. Dickens attacks law, government, police, without clearly suggesting what he would like to substitute in their place. But this absence of suggestions should not expose Dickens to any severe criticism. Firstly, it is enough if an artist points out the maladies afflicting humanity, it is not his business to suggest remedies also. Secondly, Dickens was no philosopher. He did not have the intellectual calibre to formulate a philosophic system on which could be laid the foundations of a different pattern of society.

Bonamy Dobree and Miss Batho in their work The Victorians and After rightly point out:

“The pity is that this giant never grew up intellectually. Whenever he touches upon social reform or anywhere begins to think, he falls below the level of second rate.”

“He was only giving wider publicity in ‘inimitable form to a number of social facts and social abuses which had already been recognised if not explored before him.”

Both George Orwell and G.K. Chesterton have pointed out that Dickens’s criticism of society is almost exclusively moral. George Orwell writes,

“There is no clear sign that he wants the existing order to be overthrown, or that he believes it would make very much difference if it were overthrown.”

For in reality his target is not so much society, as ‘human nature’. Dickens himself, at the end of the book, writes,

“I have said that they were truly happy: and without strong affection and humanity of heart and gratitude to that Being whose code is Mercy and whose great attribute is Benevolence to all things that breathe, happiness can never be attained.”

“Dickens seems to have succeeded in attacking everyday and antagonising nobody.”

And that is no trivial achievement.