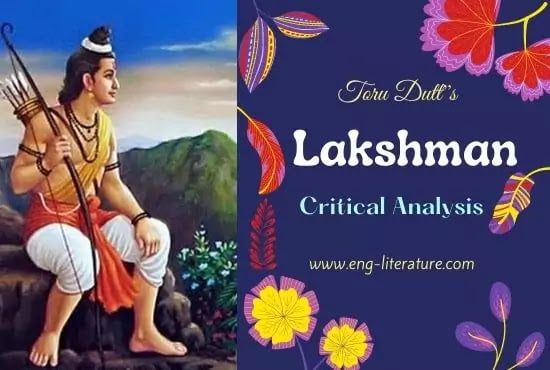 Toru Dutt had a thorough knowledge of India’s traditional past and this had given her a strong foundation for a better superstructure to be constructed over the edifice. In the stories of the Ramayana, the Mahabharata, the Vishnu Purana and Srimadbhagavat, Toru Dutt found rich food for her imagination. After her return to India she began to study Sanskrit and acquired mastery in it and she read the Hindu classics in the original Sanskrit version. She brought out her second volume under the title of Ancient Ballads and Legends of Hindustan with an introduction by Edmund Gosse who considers it, “Toru’s chief legacy to posterity.” Here she glorifies India’s cultural heritage. She evolved herself from a translator into a poet. She translated many French and Sanskrit poems into English.

In poems like “Lakshman“, we find the translator growing into a poet. Under her creative impulse she selected and elaborated particular passage from the original texts which she found suitable for producing desirable artistic effect. “Lakshman” is a good example of this. She translated the piece from the forty-fifth canto of “Aranyakandam” of the Ramayana.

Though “Lakshman” is short, it is a brilliant poem of nineteen stanzas. Within this short span, she sharply presents the characters of Sita and Lakshman with dexterity by using the method of contrast. She depicts the reaction of Sita and Lakshman to the suspected calamity. She loses her nerve and her equipoise and accuses Lakshman of infidelity and evil design. Sita’s gentility and sadness of heart disappear in the face of crisis and she becomes weak. While in the grip of fear, she forgets her husband’s valour and strength and mistrusts Lakshman.

Thus Toru presents Sita, shorn of her divinity, as an ordinary human being with all her weaknesses. In contrast Lakshman’s character shines and rises in stature. He keeps his coolness and composure and wonders what uncommon force must have played the trick on them. Even though he is accused by Sita of some malignant motive, he does not lose his equanimity. On the contrary he sympathises with her. Thus Toru elevates the character of Lakshman through dramatic interaction.

The moment the pitiful cry is heard, Sita exhorts Lakshman to leave forthwith to help Rama. Overpowered by weak thoughts. She takes the wail of Rama to be death’s signal while Lakshman wonders how one who goes to the rescue of others should himself seek help. Lakshman tries to calm her by telling Sita of Rama’s prowess and mighty arm. He strongly states that Rama won’t cry “like a child” for assistance and that he is not made of such mettle It could be the trick of some foe, because “He has a work (assignment)-he cannot die.”

This line gives a new dimension to Lakshman’s character. It implies that Lakshman was well aware of the purpose of Rama’s ‘avatar’ and the task he should perform.

Lakshman is reluctant to leave Sita as he is ordered by Rama to guard Sita. He prays to Sita not to beseech him to go. Sita misunderstands Lakshman’s reluctance to leave the place and accuses him of cowardice. She straight asks him if he were a coward, She thinks that the valour he has displayed before is due to the mighty presence of Rama. But at present she comes out with the worst suspicion which deeply hurts Lakshman:

His Kingdom-one would take his wife!

A fair partition!-But it makes

Me shudder, and abhor my life.”

These words of Sita lacerate Lakshman’s utmost heart like poisoned swords. Though hurt, he takes these words with sympathy and understanding and regrets her rashness in judgment. At last he leaves, but seeks her forgiveness. By making him apologise to Sita, Toru brings out Lakshman’s magnanimity. Thus by setting up a contrast between the reactions of Sita and Lakshman to the tricky situation, Toru Dutt highlights Lakshman’s equanimity, grace and magnanimity as against Sita’s loss of courage and composure and rashness in judgment.

The word “hark” repeated here jolts the reader into paving attention to what she says and again the repetition of “it is” shows how she reassures herself that it is Rama’s cry. The exclamatory mark at the end of “Voice” suggests her disbelief. A sense of urgency can be seen throughout the stanza and it is brilliantly conveyed through the pauses. These techniques testify to Toru’s artistic skill.

In the tale of Lakshman, we have the ideal brother. Lakshman loves Rama from the core of his heart. He is dutiful to the elder brother, seeking glory in faithful service in life-long loyalty and truth. He is forced by the unwarranted and unkind insinuations of his brother’s wife Sita to leave her in the forest and go to the help of Rama, who, she fears, is in the grip of dangerous demons.

Lakshman tries to convince her of Rama’s immense power. But Sita grows all the more insistent and uses harsh words for him, doubting his motive and character. Even while going Lakshman does not forget his duty- the protection of Sita assigned to him by Rama and draws a magic circle on the ground asking Sita not to cross it. Sita violates his instructions and the result is the fierce battle between Rama and Ravana (The lord of demons).