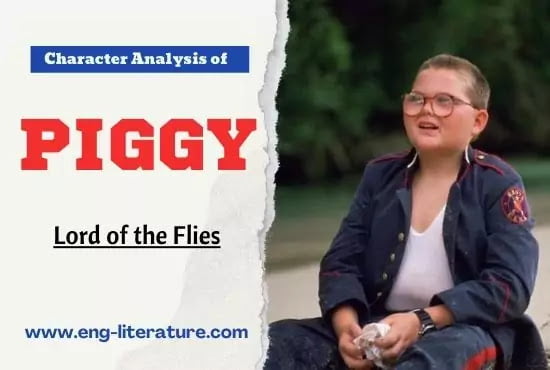 Piggy Lord of the Flies

Lord of the Flies, says Patrick Reilly, springs from the cultural catastrophe of our times. To Golding, World War II confirmed that “darkness was all around, inexplicable, unexercised, haunted” and he set out to discover whether there is that in man which makes him to what he does that’s all.” The real triumph of Lord of the Flies is not its parodic demolition of Ballantyne’s The Coral Island, but the innovative skill in the creation Piggy– how sin enters the Garden of Eden; it is after all the oldest story in western culture and Golding’s contemporary rendition is a worthy continuum of the tradition, with Piggy emerging as the hero among the boys marooned on the island somewhere in the Pacific Ocean.

Piggy is a complex character with his “unhesitant commonsense,” claiming to be the book’s hero. This commonsense is evident from the start as when he organises the meeting and tries to make a list of everyone present. It is significantly, the first question put by the rescuing officer, he wants to know how many boys there are and is disappointed and a little shocked to hear that English boys in particular have not made even this elementary calculation. Yet Piggy, is a doubtful hero who, no sooner met, has to rush away from us in a bout of diarrhea; in addition, he wears spectacles, suffers from asthma, is fat through eating too many sweets in his auntie’s shop, can’t swim, and, most important of all, his abysmal English reveals him as unmistakably working class. What, one wonders, was he doing on the plane with boys so clearly his social superiors?

Yet, it is he who has a monopoly of commonsense and practical intelligence. Jack, instinctively recognising him as an inferior and a target of abuse, orders him to be quiet, yet no one else talks such consistent good sense. Ironically, in the increasingly hysterical atmosphere, that turns out to be as much a handicap as his bad eyesight.

Piggy lacks the looks but has the know-how. The trouble is that he knows but cannot do, and is relegated, in accordance with Shaw’s dictum, to being at best a teacher. He cannot blow the conch himself the asthma again-but he sees its possibilities and shows Ralph how to do it. He never advances his own claims to leadership nor even thinks of doing so, but is happy to be Ralph’s adviser, the thinker and framer of policy. Lord of the Flies does not, like The Admirable Crichton, depict the rise of a meritocracy, when, following the social upheaval of shipwreck, the supremely efficient butler takes over as leader from the feckless aristocrats and only relapses into subordination when the party is rescued and taken back to the Home Counties from the jungle. Ralph and Jack are the leaders in the jungle as they would be in England. Barrie’s aristocrats, recognizing the demands of reality, resign themselves to accepting a social inferior as their natural leader; Golding’s boys would laugh at the idea of taking orders from Piggy.

Piggy knows he is inferior just as Ralph and Jack take their superiority for granted. It is this sense of inferiority that makes him deliver himself into the hands of his class enemies right from the start when he foolishly tells Ralph his derisory nickname and even more foolishly asks him to keep it a secret. It is perhaps unfair to say that Ralph betrays him, since betrayal implies a confidence solicited and a promise broken, and Ralph does neither, but at almost the first opportunity Ralph blurts out Piggy’s secret to the whole world. Even Ralph, so straight and decent, is not above meanness.

That Piggy does to some extent bring his troubles upon himself leaves unchallenged his claim to be the sensible person on the island. He himself never makes this claim because he only partially realises it. One of his limitations is a tendency to credit others with his own good sense…. He shares Ballantyne‘s confidence that commonsense can master any problem and he believes that most people, given the chance, are as logical as himself. When, after Ralph’s first speech- Piggy admires it as a model of succinct good sense–the other boys, led by Jack, run off in disorganised excitement to light the signal-fire, Ralph and Piggy are left alone with the conch; then Ralph, too, scrambles after the errant assembly, leaving disgusted commonsense on its own.

Yet, in this ambivalent book in which everything is double-fire is both good and bad, faces lit from above are very different from faces lit from below, Nature is both beautiful and menacing, the human being is at once heroic and sick-it is fitting that Piggy’s handicaps, most notably the asthma, all those things which qualify him as the target for ridicule, should be in another sense, compensations. Piggy is stricken when Ralph talks despairingly of surrendering to Jack: “If you give up”, said Piggy in an appalled whisper,“what’ud happen to me?… He hates me. I dunno why.” On the naturalistic level this is perfectly credible; a little boy, with every cause to be frightened of a bully, expresses his own personal fears, but allegorically we note the impotence of commonsense to check the progress of demented totalitarianism.

There is certainly much to admire in Piggy. His liberal-democratic outlook and sense of fair play lead him to the honourable idea that everyone, however lowly, has a right to speak-even a littlun who wants the conch must be given it. Piggy supports a polyphonic society, Jack a society of mutes, since men require only ears to hear the master’s command.

Piggy, too, is the first to recognise that life entails making certain choices and establishing certain priorities.

“We want to be rescued: and of course we shall be rescued.”

But Ralph compounds his offence by presuming still more: ‘We want to have fun. And we want to be rescued.’ (Fun is a word worth watching in Lord of the Flies for on the three important occasions when it is used-here by Ralph, by Beelzebub in his warning to Simon, and finally by the unseeing officer-it sets alarm bells ringing.) The conjunction used by Ralph implies a confidence that we can have both things-fun and rescue—together. The boys have had a happy accident: they will have a delightful, unexpected, adult-free holiday, with rescue just around the corner the moment boredom begins.

It is the practical Piggy who jarringly introduces the reality principle into this dream of pleasure. Piggy introduces the unpleasant idea of an incompatibility between desires; if rescue is our first priority, then fun must come a poor second. … Civilization, says Freud, is based upon the renunciation of instinctual gratification and Piggy is the only Freudian on the island. Lord of the Flies depicts, initially, the disintegration of a society whose members play rather than work.

Self-denial is the infallible litmus-test. When Jack goes hunting, he is clearly doing something that is both demanding and dangerous instinctual gratification is not necessarily immersion in sybaritic hedonism. The point is that Jack is doing what he wants, not what he ought; he relishes the danger of the chase and the excitement of the kill. Piggy does not criticise Jack for doing what is easy, but for putting his own pleasure above the priority of rescue. Stalking pigs is thrilling, tending a fire is dull, so Jack opts for Yahoo excitement in preference to Houyhnhom tedium-that’s what makes him the foe of civilisation and Piggy alike. The trouble is that Jack is more representative than Piggy and his outlook prevails…. It is hard to be civilised, deleteriously easy to be savage. Work is irksome, and, in terms of this Kantian definition, Jack is a layabout, even if he chased pigs from dawn to dusk.

Only to a certain degree, however, because Piggy’s intelligence is seriously limited. It is Simon, a character not to be found, however faintly, in Ballantyne’s story, whom Golding uses to highlight Piggy’s shortcomings. The distance separating Piggy from Simon (who clearly embodies Golding’s highest values) is indicated in Piggy’s shocked incomprehension when Simon hesitantly suggests that “perhaps there is a beast and that maybe it’s only us.” Piggy indignantly rejects this as ‘Nuts!’ Simon’s mystical speculations are beyond Piggy’s limitedly sensible mind.

For Piggy, man is nor ill-he just has a foolish but corrigible habit of following Jack when he should be taking Piggy’s sensible advice, Piggy is still handing out this sensible advice when the stone crushes him to death.

Piggy starts off short-sighted, becomes one-eyed and, finally, his glasses stolen, is completely blind; it is, in terms of the allegory, a depressing view of the value of commonsense. His reverence for the conch is at once exemplary and absurd, touching and ludicrous. As with his commonsense, he tends to attribute his own values to everyone else. Thus, despite Jack’s unconcealed contempt for the conch from the start, Piggy foolishly believes that the purpose of Jack’s raid was to seize the conch and not the glasses.

To the end Piggy clings to the delusion of legitimacy. Piggy’s passionate willingness to carry his talisman against all the odds is at once a tribute to his liberal commitment and the guarantee of his eventual destruction. No wonder the savages giggle derisively when Ralph tells their chief that he isn’t “playing the game,” that in stealing Piggy’s spectacles Jack has broken some schoolboy code.

Piggy insists on treating the savages like a crowd of scatter-brained kids, implying that if only they behaved like adults all would be well. When Roger, looking down on the bag of fat that is his view of Piggy, releases, “with a sense of delirious abandonment,” the great rock that kills the advocate of adult commonsense, he is not acting like a kid but like the corrupt adults who have plunged the world into atomic war in the first place. Commonsense and the conch perish together and there is nothing healing or transfiguring about this death.

Piggy represents a vanishing breed of men which we have come to associate more closely with the last two centuries than with our own. He is the hopefully over-optimistic rationalist who assumes that man is a naturally reasonable creature and that, once scientific law has been fully understood, man will live in accordance with it a utopian life on earth.

Piggy Lord of the Flies Quotes

“Which is better—to have rules and agree, or to hunt and kill?”

“What are we? Humans? Or animals? Or savages? What’s grownups going to think?”