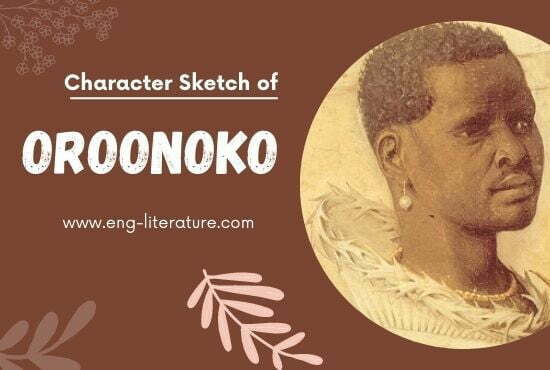 Oroonoko is a very proud man, and an even prouder prince. His honor, courage, and heroism are respected and praised by all his people. Slavery is a situation that would humble most people, but being sold into slavery does not take away Oroonoko’s pride, honor, or personal feelings of royalty. His confidence, courage, and demanding of respect help rally his fellow slaves and to try to help him escape his unfortunate situation. He believes that slavery can be justified, but not in his situation, especially because he was a prince. His views on slavery, along with the narrator’s, are expressed throughout this novel, and help explain Oroonoko’s feelings.

As a prince, Oroonoko has learned to be very confident, and to use his power for many things, especially when he wants to get his way. His passion and desire for many things, such as honesty, loyalty, and true love, are what drive him to do whatever he can to make these things happen. In the case of Imoinda, he not only tells her how much he loves her, but he lets her know that he will never let her go. She is his desire, and he must have her or he will not be satisfied.

“He made her vows she should be the only woman he would possess while he lived, that no age or wrinkles should incline him to change, for her soul would be always fine and always young” (Behn 17).

As a ruler, he must show his power in all aspects of his life, and with Imoinda there is no exception.

Trust and loyalty are values that Oroonoko holds close to his art as well. However, his naive sense of character among people leads to his downfall. When the ship commander asks Oroonoko to join him on the boat for dinner and drinks, the prince does not give it a second thought. He never once has any doubt of the commander’s intentions. If he had been more cautious or weary about why the commander would invite him, then he could have avoided this situation.

Since he believes that all men are honest and decent, Oroonoko never would have guessed that, while on board the ship, he would quickly and abruptly be thrown into slavery. His trusting nature is used against him while on that ship, and once in slavery Oroonoko’s anger about the commander’s dishonesty is truly shown within his words.

“Come, my fellow-slaves, let us descend and see if we can meet with more honour and honesty in the next world we shall touch upon” (Behn 41).

Contrary to how things may seem, Oroonoko does believe in slavery. He feels that slaves are necessary for some people in order to help them with chores and work during their life. Nevertheless, he believes that there is only one situation when slaves should be obtained, and that situation is to win slaves through war.

Oroonoko speaks of honesty in slavery, and to simply buy and sell people is morally and politically unjust. In war, slavery is a common trade between enemies. They know that people will be won and lost while in battle, and only in that way can slavery be considered honorable.

Now enslaved and under another man’s power, it would have been easy for Oroonoko to give up and submit to his new master He treats Oroonoko well, and gives him a good life, despite having to serve him as a way of life. But Oroonoko is a born leader he does not know how to surrender. Oroonoko now finds the will courage, and leadership to do what he can to help free not only himself, but also his one true love.

After finally seeing Imoinda once again, Oroonoko finds out that he is also to become a father. Realizing that his offspring would be born into the cruel life of a slave, Oroonoko becomes intolerant, and expresses his extreme desire to free himself and his family from this tragic life.

“This new accident made him more impatient of liberty.” (Behn 48).

It is at this time that Oroonoko quickly gathers up many of the other slaves and gives a long speech about their injustice and their lack of freedom. It is clear that there is passion in his words, and he makes it clear to his fellow slaves that he wants nothing more than for all of them to be free. He wanted the people to help so he and his family could escape: he did not much for the other slaves’ freedom. This plan of rebellion, however, remains short-lived. The English discover the slaves’ plans, and quickly take to action. Angry and abandoned, this prince now feels there is only one way to save his wife and child from a life of inequality.

With no way other than living the lives of slaves, Oroonoko now believes death is the only way to save his family from certain grief and torment. Imoinda agrees with this and wishes her true one to strike her down so that she may suffer no more in this life.

Having no more reasons to live and too weak to even get up Oroonoko remains there, lying beside his dead wife. The glare masters eventually find him, and take him back to camp. Already beaten and whipped, Oroonoko has little strength left. The English then proceed to chop Oroonoko into many pieces, ending his woeful life.

With the people knowing that he was a prince, Oroonoko already held much power over the other slaves. He easily manipulated them into wanting to follow him and to attempt an escape. With many followers and supporters, Oroonoko held enough power to help Imoinda and himself flee from the English power and this was all he cared about. He simply needed the people’s support in order to help his own cause; he did not truly care whether they lived or died, as long as his own wishes came true.

Once being a prince and holding certain views on life and politics, Oroonoko seems to be a hypocrite when dealing with slavery. One would definitely think that any man would fight for his freedom, whether he was captured in war, or simply deceived. Oroonoko does not voice this opinion, however, and feels that if he had been captured in war, he would not revolt against his slave master. As a prince, he himself had captured slaves in the heat of battle, and sold them into slavery.