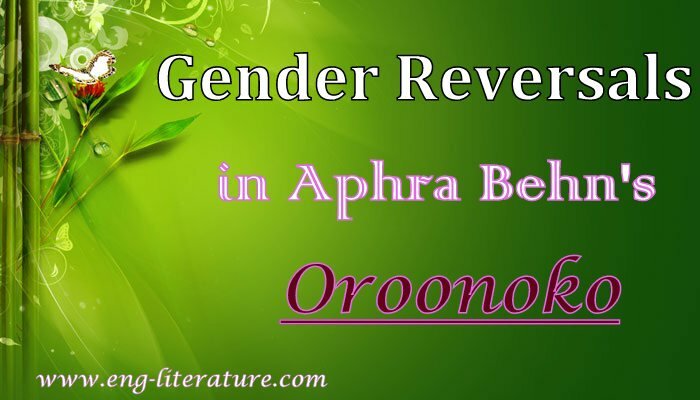 Aphra Behn was an outstanding woman writer in the Restoration, a period that suffered from some misogynistic attitudes. During this time, it was thus quite courageous for women to try to make a living out of writing without using a pseudonym or publishing anonymously. She was the first professional British female author and she often had to cope with male critics. In order to make a change, she had to break the culturally accepted gender rules and for this reason, she is an inspiration for all the future women writers. In 1929, Virginia Woolf wrote,

“All women together ought to let flowers fall upon the tomb of Aphra Behn . . . for it was she who earned them the right to speak their minds”

Behn likes to play with the conventional gender roles and her characters often possess some qualities of the opposite sex. While reading the short novel, it is noticeable how gender stereotypes alternate with gender reversals, for instance Oroonoko is both characterised by manly actions as by his feminine features. When looking through Aphra Behn’s oeuvre, it is noteworthy how her work is dominated by strong female protagonists. Although both Imoinda and the female narrator play an important role in this short novel, as the title suggests, it is the male Oroonoko who is the centre of Behn’s Oroonoko, or, the Royal Slave. Oroonoko is presented as a brave man, for instance by winning wars in Coromantien, by winning fights with enormous tigers in Surinam etcetera. These activities are clear indication of Oroonoko’s manliness. His ultimate masculinity is eventually shown when he so quickly succeeds in impregnating Imoinda, which was the obvious task of a husband: “From that happy day, Caesar took Clemene for his wife (…) and in a very short time after, she conceived with child”(Behn 44).

However, throughout the short novel, Oroonoko is also strongly feminised, as was already proven in the previous chapter by the description of his long hair, his female carving etc. Even though the male protagonist is described as a courageous man, he also acts “like a long-suffering romance heroin”. Thus aside from his masculine bravery, Oroonoko is also represented as a soft and sentimental man, which are typical womanlike qualities. He talks softly and passionately and even though he was not used to feminine conversation, he has no problem confessing his feelings in the “language of love”. Oroonoko even admits that he likes the company of women more than being with men.

Opposed to Oroonoko, who is both represented as courageous and sentimental, Imoinda is only characterised by her gender reversal. Although Imoinda is pregnant, which normally would be an indication of true womanhood, she joins her husband in a fight. She is very skilled with bow and arrow since she manages to wound several people, which is usually seen as a male symbol. . Hence, it could be that the strong female Amazons and the modest Indian maidens served as a model while creating Imoinda. When Oroonoko’s actions require a powerful woman to help him, his wife is there to support him in combat with bow and arrow. Her masculinity is also shown in the end, when the female warrior is leaving this physical world smilingly.

Not only Oroonoko and Imoinda break the rules of traditional gender roles in the Renaissance, also other characters in the short novel cross the gender-based boundaries and thereby balancing themselves between contemporary and innovative conceptions of gender. Starting with the group of female black slaves, they were regularly viewed as in some way masculine. Slave owners paid per lot. They did not make a distinction between male or female labour so black women had to undergo the same hardship as black men, working alongside each other and doing the same aggravating jobs. Beside the group of female slaves, there are also some men in the story who, just like Oroonoko, sometimes behave in a more feminine way. A first example is the kind Trefry.

Behn, with her mighty pen is capable of criticizing the traditional gender roles in her society. Probably she wants to throw the message to the society that women too are allowed to express their feelings through writing and they should also be permitted to earn their own money, without being criticised. Likewise should men also be able to openly express their feelings and to show a sentimental side, instead of always being supposed to think and act rationally.