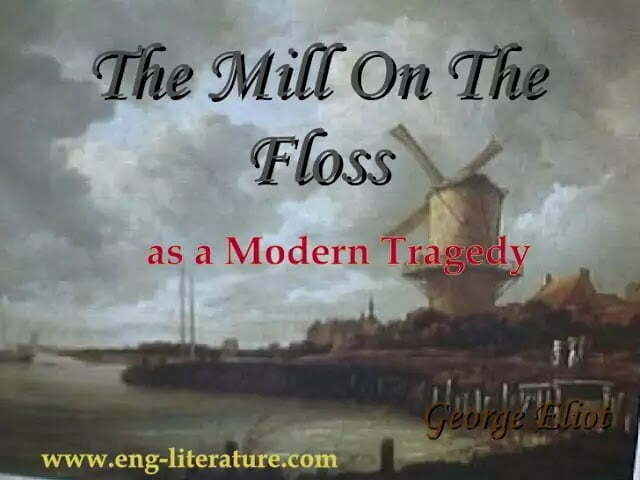 The Mill on the Floss as a Modern Tragedy

The Mill on the Floss is a tragedy containing a lot of pathetic incidents as well as tragic characters. It is a story of pain and suffering ending in total extermination of Tullivers.

George Eliot was a realist and portrayed what she herself saw. There was a plenty of tragedy in her age and being a realist she gave a truthful picture of the miseries endured by the people of that age. Moreover, she had tragic outlook. Anything tragic, was bound to strike her.

Tragedy happens due to different reasons. Firstly, it happens in the form of fate – chance and circumstances beyond the control of common man — or it may also happen due to some accident. Secondly, a tragic flaw in the character of the protagonist causes tragedy. And it can also be a result of certain social beliefs or pressures which cannot be escaped. Lastly tragedy becomes inevitable on account of a deed on action committed by the protagonist.

In George Eliot, tragedy happens on account of all these. She believes that character itself is not responsible for causing the tragedy, all the times — external reasons also count. Still she believes that the character plays a major role i.e. a tragic flaw in the character of the protagonist leads to tragedy.

According to her man he improvises his character in whatever way he wants. She emphasized that one must exert one’s maximum to shape the character right. She thinks that one has to face the consequences of one’s actions so even the slightest errors ought to be avoided.

She believed that man has two selves. One self calls for duty – one must perform one’s duty as accurately as possible – and the other self calls for passion. She thought that the self Calling for duty, in fact, invites goodness whereas the other self who calls for passion invites destruction. To make a choice between these two is very significant. Salvation and destruction wholly depend on our choice. She applies the law of moral retribution — the doctrine that sins bring their wages.

Maggie suffers from childhood till her death. Her life is very painful and arouses pity while happiness in her life is occasional. Firstly, she suffered on account of her nature and temperament. She was sensitive and impulsive and continues to be so even in her youth. Once she got angry and ran away from home and went to the gypsies. Her impulsive nature is evident from this event. It was the slights of Tom which made her sensitive, especially on this moment. Tom had slighted Maggie and had given attention to Lucy. Maggie, a sensitive girl as she was, is anguished by Tom’s behaviour and this makes her run away from home.

Maggie craves for love. She did not get any love from her mother and brother. She wants to love and to be loved. In her childhood it is only her father who shows some affection for her.

Maggie was out of harmony with her environment. Her mother was always scolding her. The behaviour of uncles and aunts was always disgusting and they didn’t let any opportunity let go wasted. She remains lonely and there is nobody who can share her feelings.

She had a delicate conscience and her moral scruples cause her a lot of mental suffering. After her elopement with Stephen, she suffered a lot. Tom refused to accept her had to go to Bob Jackin. Stephen proposed her for marriage she refused it straightaway. She knew that in doing would be able to lead a comparatively better life and society would be forgiving towards her. But she had a strong moral sense. She knew that Stephen was engaged to her cousin Lucy who was considerate towards her. So she didn’t want to deprive Lucy of Stephen. Had she married Stephen the tragedy could have been averted.

Fate is also responsible for her tragedy. Irony of fate plays a very vital role. Maggie makes a friend – Philip – but as the things stand Philip was the son of the enemy of her father.

A lot of problems arise on account of the family affairs her father was rash in decision. His unwise decision to register a case and fight a law suit against Wakem proves fatal. Tulliver is an imprudent and sentimental fellow. Because of this law suit he has to lose his mill and what’s more he becomes worker in that very mill. Now the enmity increases and Maggie ultimately suffers because she is not allowed to come near Philip.

There is a conflict in her mind about duty and desire. The duty asks total abandonment of her relationship with him while the passion and desire wanted to be with Philip. As she was loyal to her family she was forced to forget Philip.

The real disaster in her life comes with arrival Stephen. This man was engaged to Lucy. Maggie knew that but as ill luck would have it Maggie and Stephen fall Whether or not Stephen was charming Maggie was towards him. But this allurement finally resulted in her death.

Tom’s desertion was also one of the major face bringing about the tragedy in her life. When she came with Stephen after five days Tom refused to accept. Although she was chaste but Tom’s strict moral code would never yield, before the tears of his sister. She went from her home with her mother. But on the day when the flood came she was still remembering Tom, and went to help him. But strong tides of the river Floss were more powerful than the innocent aspirations of Maggie. She dies with her brother. But the fact of the matter is that they were joined in death though separate in life.

Thus The Mill on the Floss is truly the tragedy of Maggie. But there are other characters in the novel whose fate is also tragic.

Philip suffers on account of his deformity. Fate is responsible for his suffering as far as deformity is concerned but these sufferings were aggravated by the desertion of Maggie.

In the same manner Lucy is the victim of circumstances. She is a faithful and considerate young lady. But the tragedy of her life arises because she is herself passive and trustful to others.

Mr. Tulliver suffers because of his own character. He is very obstinate proud and rash. These flaws in his character give rise to the tragedy in his life.