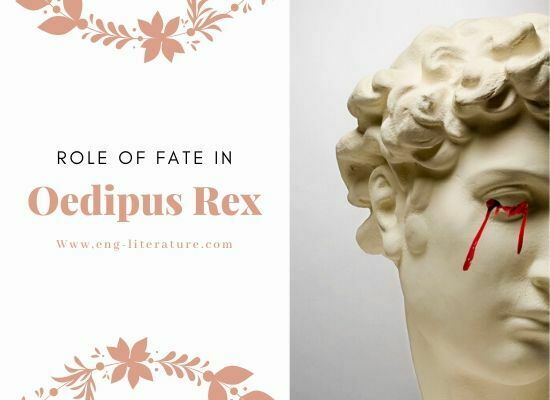 Role of Fate in Oedipus the King

In the Greek tragedy Oedipus the King written by Sophocles, the antagonist is fate. “Destiny is character” here. The role of fate is deeply intertwined in the plot. Predestination in Oedipus the King caused havoc despite attempting to escape it. Two characters bring about a fate worse than their original fate as punishment for trying to cheat fate.
The first instance-involving fate occurs when Oedipus sends Creon, Jocasta’s brother, to the temple of Apollo, the god of prophecy and healing, to find the fate of Thebes and how to rid Thebes of the plague the people are suffering from. Oedipus says,

“I acted at once. I sent Creon,
My wife’s own brother, to Delphi—
Apollo the Prophet’s oracle7—to learn
What I might do or say to save our city.” (Sophocles, 81-84)

It is important to note that Apollo made the prophecy to King Laius, Jocasta’s former husband, and Jocasta, Oedipus’s wife, that they would bear a son who would kill King Laius, and Apollo made the prophecy to Oedipus that he would kill his biological father and sleep with his biological mother.
Fate is next brought into the play when Creon is sent in search of the blind prophet of Apollo, Tiresias. Against his will, Tiresias reveals Oedipus’ fate. Oedipus is so anxious to find the murderer of King Laius that he will not give up until the murderer is found. Oedipus relentlessly pursues the truth, unwilling to give up until the truth is found.
After Oedipus repeatedly provokes Tiresias, he reveals what Oedipus is and who Oedipus really is. Tiresias says to Oedipus,

“You cannot imagine…I tell you,
you and your loved ones live together in infamy,
you cannot see how far you’ve gone in guilt.” (Sophocles, 417-419)

Tiresias is alluding to the fact that Oedipus unknowingly is married to his mother and has produced offspring through her. Oedipus is too blind to comprehend what Tiresias is saying. Tiresias goes on to say, “I pity you, flinging at me the very insults / each man here will fling at you so soon” (Sophocles, 423-424). Tiresias is warning Oedipus that everything he thinks he has is not really his. People will turn against Oedipus and he will lose everything. Oedipus blasphemes against the gods when he tells Tiresias that he does not have the gift of prophecy. This is blasphemy because Tiresias is the messenger between gods and humans, and when Oedipus calls him a liar he is denying the words of the gods.
Upon further provocations, Tiresias tells Oedipus that Oedipus does not know where he is living or who his parents are. Tiresias insinuates that Oedipus is both father and sibling to his children when he says, “And a crowd of other horrors you’d never dream / will level you with yourself and all your children” (Sophocles, lines 485-486). Next Tiresias predicts, “This day will bring your birth and your destruction” (Sophocles, 499).
In his final speech towards Oedipus, Tiresias tells Oedipus that he is the murderer. Tiresias further tells Oedipus that though he is a stranger to Thebes, he will soon discover that he is a native Theban. Oedipus will also discover that he is both father and brother to his children, and both son and husband to his wife. Tiresias aptly foretells that Oedipus will lose everything; that Oedipus will be blind and exiled (Sophocles, 510-525).
After first arguing with Tiresias and then Creon, Oedipus talks to Jocasta, bringing about our third example of fate as an antagonist. Upon learning what the argument was about Jocasta relays that an oracle had come to King Laius and told him that he would “die a victim at the hands of his own son” (Sophocles, 786-787). The king had pierced the infant’s ankles and sent him to die. Besides King Laius was killed by highwayman. Jocasta argues that Oedipus should not fear prophecy because of the following,

“Apollo brought neither thing to pass. My baby,
no more murdered his father than Laius suffered,
his wildest fear—death at his own son’s hands.
That’s how the seers and all their revelations.” (Sophocles, 794-797)

Jocasta should have known that she could not outwit the gods, or fate. Fate next comes into play when Oedipus, who has begun to think he is King Laius’ killer, recounts the dinner where the drunken man accused Oedipus of being a bastard. Oedipus goes to the oracle at Delphi to find his destiny. The oracle tells Oedipus as follows:

“You are fated to couple with your mother, you will bring,
A breed of children into the light no man can bear to see—
You will kill your father, the one who gave your life!.” (Sophocles, 873-875)

After hearing the oracle’s prediction, Oedipus flees Corinth to protect Merope and Polybus and to escape his destiny, which gives us our fifth instance of fate.
The change in the curse was brought about by Jocasta, who feared the oracle’s prophecy. Jocasta sent the infant, Oedipus, to his death. In doing this Jocasta was attempting to cheat fate. Jocasta thought that if she killed the baby, she could change her husband’s destiny. The added prophecy that Oedipus would lie with his mother and produce cursed offspring is a result of Jocasta’s attempt to cheat fate. Oedipus is really an innocent victim of fate.
Again fate is seen when the messenger brings news that Polybus has died a natural death. Both Oedipus and Jocasta rejoice briefly in this news for it further proves that oracles are wrong Yet, Oedipus still has fear of prophecy for he will not return to Corinth as long as Merope is alive, for fear that he will lay with her. The messenger tells Oedipus that Merope is not Oedipus’ true mother, as he himself gave Oedipus to her and to Pelops as a gift (Sophocles, 1113-1119). It is a strange twist of fate this messenger both took Oedipus to Corinth, but also is one of the final puzzle pieces in Oedipus‘ true identity.
When the shepherd arrives on the scene he is forced by Oedipus to verify that Oedipus is the child of Jocasta and King Laius. Oedipus’ is now forced to realize that he has not escaped his fate. The entire prophecy has been fulfilled. After finding Jocasta’s body, “And there we saw the woman hanging by the neck” (Sophocles, 1396), Oedipus does the following:

“He rips off her brooches, the long gold pins
holding her ropes—and lifting them high,
looking straight up into the points,
he digs them down the sockets of his eyes, crying.” (Sophocles, 1403-1406)

In the end of the play Oedipus is blind, ruined, and exiled just as Tiresias foretold when he said,

“You are the scourge of your own flesh and blood,
And the double lash of your mother and your father’s curse
Will whip you from this land one day, their football
Treading you down in terror, darkness shrouding
Your eyes that now can see the light.” (Sophocles, 474-479)

Fate came out victorious in the end. In the Greek vision Fate cannot be altered or cheated. Even the gods cannot change Fate. Instead of claiming one victim, many were ruined. If Jocasta had not tried to cheat fate, perhaps King Laius would be the only death. Instead King Laius and Jocasta are both dead, Oedipus is ruined and his children are cursed by this incestuous pollution. Fate is a force not to be reckoned with.
Is Oedipus responsible for his own fate?
Considering all the facts ,we can say that Oedipus is neither a free agent nor a mere victim of fate. The major events of his life are determined by the tragedy of fate, but his own acts such as fleeing from Corinth, killing an old man, marrying an aged woman, without knowing his whole identity, showing over-confidence and milking the shepherd for information all have contributed in precipitating the disaster.
Also Read: