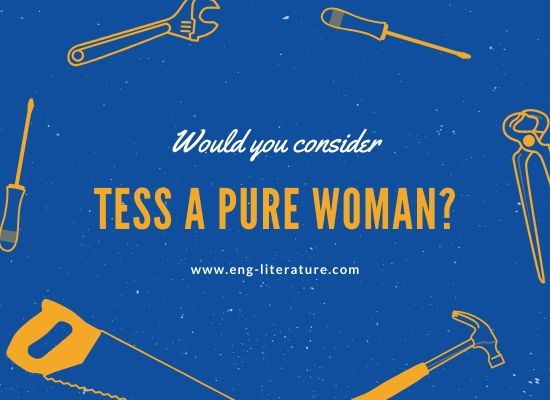 Is Tess A Pure Woman ?

When Tess of the d’Urbervilles was first published, it caused a storm. Many people found the sub-title of the book offensive. They did not understand how Tess could be subtitled a pure woman when her sexual and criminal guilt were beyond dispute. In a note Hardy regretted the fact that his critics had ignored the meaning of the word “pure” in nature, together with all aesthetic claims upon it, not to mention the spiritual interpretation afforded by the finer side of their own Christianity.

Hardy regarded Tess as a pure woman, and rightly so. It is clear from events preceding the seduction that Tess in no way encourages Alec in his amorous advances. From the beginning she shows a natural modesty and a chaste independence of mind and body. She is distressed when Alec feeds her with strawberries. She wipes off the kiss he gives her on her second journey to “The Slopes.” She strong-mindedly decides to walk the last few miles, rather than sit next to him on the carriage. Owing to her dependence on Alec’s mother, and his mother’s dependence on him because of that lady’s blindness, Tess becomes more pliable under Alec’s hands than a mere companionship would have made her.

Alec D’Urberville is a man skilled in the arts of seduction. Even though he could never have led Tess to a wholehearted surrender, his tactics bewilder her, and undermine the security of her defence. It seems likely also that she was not very well aware of the physical act to which it was all leading. She was ill-prepared to fight culpable passions, the existence of which she did not know about. Later she puts much of the blame on her mother: “Why didn’t you, warn me?”

Alec had subtly worn down her mental defenses, though certainly the point of conscious submission. On the journey home on Alec’s horse after the fight with one of her companions, Tess, is in a physical exhaustion. She is indescribably weary. She had risen at five every morning of that week and had been at work the whole of each day. On this evening she had, in addition, walked the three miles to Chasehorborough, waited three hours for her neighbours without eating or drinking, then walked a mile of the way home and had undergone the excitement of quarrel. It was now nearly one o’clock. Tess naturally falls into a sleep when Alec returns and attempts the seduction, she is neither physically mentally in a condition to resist, and she hardly understands what, he is doing till it is too late.

There is some ambiguity on the fact why Tess stayed “some few weeks” after her seduction though some critics are of the opinion that during this period she had no sexual relationship with Alec. But the language used by Hardy to describe this stay offers a basis for the assumption that the sexual relationship did exist even after the first seduction. If she had not surrendered at all even on the first occasion, she would surely have run away immediately.

Mrs. Durbeyfield reacts in the “natural” way to Tess‘s sad expen “Tis nature after all, and what do please God!” Sex is a natural activity Tess is a child of Nature. We see her growth to womanhood, her “luxuriance of aspect”, and “fullness of growth” not as isolated facts, but as part of the “brimfulness of Nature itself.” Throughout the novel Hardy emphasis the neutrality or innocence of Nature, Nature is neither benevolent nor malevolent. Nature is not a force for good or for evil. In this sense, Tess is innocent. The physical surrender of a passionate girl is natural, innocent in the simple animalistic course of events. She did not surrender her heart: indeed her heart was almost unaware of what was happening. Hardy takes many opportunities to point out the strangeness of society’s artificial, unnatural code. Tess is weighed down by a consciousness of guilt. But Hardy asserts that she is deluded by the conventional attitudes of society,

Tess’s purity with regard to the murder of Alec d’Urberville is a more difficult problem. She kills him willingly and knowingly. Alec has been instrumental in bringing about Tess‘s destruction. His actions have caused her untold suffering and have completely wrecked her happiness. Tess has begun to believe that Angel Clare would never return, and also because of the overpowering feeling that Alec is her only true husband in any substantial sense. Only by Alec’s death could that physical claim be obliterated: only by killing him could she finally repudiate all that he had done.

We are firmly convinced that morally and spiritually Tess is absolutely stainless and pure. Purity is of the spirit, and with a spiritual reference, the word “pure” may be unconditionally applied to her. Purity is not to be taken in the narrow sense o f the body, it is the spirit that really matters. Tess has a strong conscience which she always hearkens to. Her inner voice tells her o f the dangers going to the new family in The Chase. Her final surrender to Alec is beyond her control. She is not her true self, the sufferings o f her family have destroyed all the willpower and strength that she possesses.

“She is as moral as any prude. Her behaviour, her thoughts, her desires, on all perilous occasions – with d’Urberville, early had late, with Clare, with her other admirers – are unimpeachable, considered from the most critical code and point of view. Moreover, her shame and remorse are infinite….”