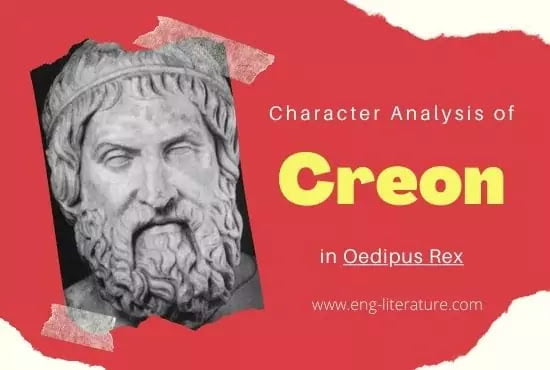 Almost like a chameleon, Creon changed his colours from play to play. Sophocles has a wide knowledge of human character, and he knew that a sheepish person might, when given opportunities, suffer a sea-change almost beyond recognition. And hence the same man becomes a new character in the altered circumstance.

In the Oedipus at Colonus, Creon was an unmitigated villain, without the least shred of humanity. He blew hot and cold in the same breath, and played the part of an angel and a devil in the presence of the blind Oedipus. He went so far as to deprive him of his daughters also, who were his prop in the hour of gloom and despondency.

In the Antigone he loudly claimed to be a statesman and was out Heroding Herod. Dressed in little brief authority, he appeared to be strictly formal, and sought to enforce laws with Draconian severity. He had always an imaginary fear that the laws he had promulgated were being violated. In his case, at least, it was true that power corrupts, and absolute power absolutely corrupts.

In Oedipus Rex, Creon seemed to be absolutely innocuous. It would be difficult to imagine that such a person would prove a despot in the plays that followed. Jocasta‘s brother, Creon was a Theban, who in this play, at least, showed no sign of ambition. As the plague stricken Thebans came to Oedipus to implore him to extend to them his help in their dire need, he thought he should do all that was possible. He, therefore, sent Creon to Delphi, so that he might learn something from the Oracle for the deliverance of the people. Creon came back with beaming eyes and with his brow bound with a wreath of Apollo’s bays from the temple of Delphi.

When asked by Oedipus, he reproduced the Oracle that Laius had been foully murdered by some unknown assassins. Unless the murderer were banished or blood repaid by blood, Thebes would never witness peace and order. Creon said nothing that could incite or provoke Oedipus and yet the latter in high dudgeon crossed all bounds of decency and decorum in his behaviour.

Not satisfied with what he thought to be the vague answers of Creon, Oedipus sent for Tiresias, the blind prophet. Tiresias, who knew the whole truth, refused to offer a pointblank reply, Oedipus was equally rude to him and said categorically that both Tiresias and Creon had entered into an unholy alliance to dispossess Oedipus. Creon on hearing of the baseless accusation, Cried out:

“If he thinks that I

Have done him any harm, by word or act,

In this calamitous hour, I will not live

Life is too long a time-to hear such a scandal!

If you, my friends, my country, call me traitor…”

As Oedipus openly charged him with treachery, Creon retained his quiet dignity. His tone, innocuous as it was, provoked Oedipus all the more. He asked him:

“Can you believe that you may carry on

Intrigues against your house and go scot-free?

Would any man exchange

For an uneasy throne? To be a king

In name, was never part of my ambition.”

However quiet Creon might be, he knew how to vindicate himself. He was not a man to be easily brow-beaten.

“But charged behind my back on blind suspicion

I will not be. To slur a good man’s name

With baseless slander is one crime – another

Is rashly to mistake bad men for good.

Cast out an honest friend, and you cast out

Your life, you dearest treasure.”

Creon may be contrasted with Oedipus. While Oedipus was impetuous and passionate, and could seldom curb his tongue, Creon was always level-headed. His sturdy common sense never deserted him. When rebuked for his treasonable schemes, he based his reply on common sense and defended himself. His words remind us of Shakespeare’s Henry IV:

That keeps the ports of slumber open wide

To many a sleepless night.”

Voltaire points out that the speech of Creon was hardly convincing. And we know that Oedipus was neither convinced nor assured. Things were taking an ugly turn, when Jocasta intervened and became the peacemaker. Yet the relation between the two never became cordial.

As the truth dawned upon both Oedipus and Jocasta, Oedipus uttered a wail of agony. Jocasta left the stage in ominous silence. Oedipus followed her only to find that she had hanged herself by a noose from the ceiling. He wrenched the golden brooches from her dress and gouged his eyes. Creon now entered the scene and showed a nobility completely alien in this play as well as in the succeeding plays. A man with a cold and practical nature as he was, he became warm in his attitude to Oedipus, who was a symbol of wild despair and utter helplessness. He did not scoff at the fallen greatness:

“Oedipus, I am not here to scoff at your fall,

Nor yet to reproach your past misdeeds.”

He even offered to prove himself a father to the fatherless children, since Oedipus was determined to die in the wilderness, unwept, unhonoured, and unsung.