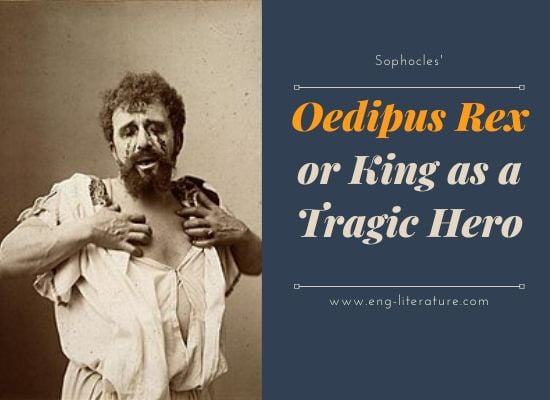 Oedipus as a Tragic Hero

A tragic hero is the principal character of a tragedy that enjoys all the trappings of power, fame and wit but through a major flaw of character fatally errs. The realization and will to concede also known as catharsis is what marks their position as a tragic hero. Oedipus is wise, of blue blood, is lovable but arrogant and he fatally errors in order to complete his picture as a tragic hero.

This study of Oedipus King explores the qualities of the drama that bring out the development of character, fate, timing, tragedy and how this all spirals to make a tragic hero. Sophocles work reflects major influences like fate, time or coincidence and character flaws to bring out what exactly a tragic hero is and he uses a variety of other literary devices among which are dramatic irony, using the chorus, suspense, fate, timing and others. Sophocles is one of the dramatists that has been greatly celebrated. His claim to fame was with his drama Oedipus King.

Aristotle established his view of what makes a tragic hero as one that must evoke a sense of pity or fear in the audience. Aristotle contests that “The tragic hero has to be a man who is not eminently good and just, yet whose misfortune is brought about not by vice or depravity, but by some error or frailty.” Furthermore, another interesting way to think about a tragic hero in Sophocles is by using an adjective Sophocles applies to all of them: “deinos” meaning both wonderful and terrible.

A tragic hero is a great or virtuous character, of high social standing who eventually meets his downfall with suffering or defeat and he realizes his error only too late.

According to Aristotle’s Poetics, the ideal tragic hero is a man whose good and bad character are mixed, but with the good predominating. Oedipus is certainly that! He is a concerned, caring king whose people love and trust him, but he has a quick, impulsive temper and fails to think in some critical situations. As a result, he commits unforgivable errors that bring him down and drags some innocent people down with him.

Oedipus is largely a victim of fate and timing for he is born in Thebes and Oedipus’ gruesome prophecy is told upon Laius’ house. Laius and Jocasta attempt to thwart the prophecy by killing Oedipus but Oedipus is born at a time when the King and Queen Polybus of Corinth are childless so they adopt Oedipus. All attempts to kill the prophecy actually bring it to completion. It is also ironic that The King and Queen Polybus think Oedipus is royal because of them but he is truly royal.

Oedipus does so many right things and few wrong things that are gruesome. A sense of hubris is seen when Oedipus is vain enough to run away from the gods who hold power about what one can be. He tries to unwind the will of the gods for dares the gods. But again we appreciate Oedipus’ caring nature that makes him meet whatever extent to do right. Oedipus didn’t want to hurt his parents so he actually ran away from them. Little did he know that he was actually fulfilling his fate in the course of leaving Corinth for Thebes.

Oedipus is rush and arrogant in such a way that he kills Laius along the way because the old man and his entourage effuse to give him way. In spite of the fact that he is warned, he breaks Laius’ neck. Fate is also a major aspect to consider for it happens to be Laius that he kills Laius as was prophesied. This action is against any form of counsel for a man only recently cautioned him about killing his father.

Fate and timing are interconnected in such a way that Oedipus arrives in Thebes when his wisdom is required. He meets the people of Thebes in a time of great despair as they are killed for not knowing the riddle of the Sphinx. What were the odds that Oedipus was wise enough to know the riddle of the Sphinx? How come he was just in time to save the people of Thebes? On being a savior, he is accelerated to the position of kingship and he is gifted with a queen or widow, Jocasta. The speed with which Oedipus becomes a King is wild and his wisdom is admired by many.

Oedipus is obstinate when he suspects connivance between Creon and Tiresias when he is trying to find out the source of the plague. Oedipus is determined to seek the truth even of it means neglecting the elders like Tiresias who can see the past, present like the chorus and future. It is ironic that Tiresias sees but the King who sees cannot. Tiresias goes on to say, “Pride breeds the tyrant.” The playwright uses the irony of the blind that seem to achieve the grave portrayal of the tragic hero.

Oedipus, as hasty as he is, loves pleasing the public and is beyond excitement which makes him pass a judgment on the murderer of Laius, that is, to be banished from Thebes. He is an outright dictator for he doesn’t ask the functions of the state to counsel him. Satire is employed for he passes a judgment on himself in the end and runs into problems. Oedipus sees Thebes as his responsibility in all ways so can one blame him for feeling the remorse he felt? Oedipus says, “My spirit grieves for the city, for myself and all of you.” On the other hand, he is strong-willed for he sets his verdict and actually meets it.

Oedipus is vain and shallow minded and he portrays hamartia in that he doesn’t caution if Jocasta could be his mother. A man recently warned about marrying his mother would think twice about marrying an older woman, yet the allure of a Queen. Power and beauty bring Oedipus bring Oedipus straight to the fangs of fate. To make the situation of poorer quality than it already is, Oedipus tells Jocasta his upbringing after he is married for 4 years and having 4 children using the style of flashback.

No sooner does Oedipus tell Jocasta his background than he realizes the ugly truth of his existence. This is peripetia. If banishment was Oedipus’ only punishment, the play might have been a bit simpler but Oedipus in a fit of rage, stabs out his own eyes. This was Oedipus’ way of punishing himself as well as an escape from the gazes by his subjects, his brother or uncle and his children. Oedipus is plunged into darkness as a means of punishment for the physical pain seems to prove that. He pays for being blinded by his foolish pride and power. This is catharsis, an emotional cleansing, a point of realization after all wrong is done and a call for pity. The chorus feels sorry for this man who has unknowingly killed his father and married his mother for the people of this land that he saves from a curse and brings them a curse. The chorus also pities Jocasta who is an innocent bystander in the whole confusing disaster.

Therefore judging from Oedipus’ self-assessment which ends in a lifetime of misery, shame and exile for the major character is clearly a tragedy. Where fate had left a fracture on the fabrics of life, character has completed its decimation. Tragedy is what Jean Racine says in one of her quotes;

“A tragedy need not have blood and death; it’s enough that it all be filled with that majestic sadness that is the pleasure of tragedy.”