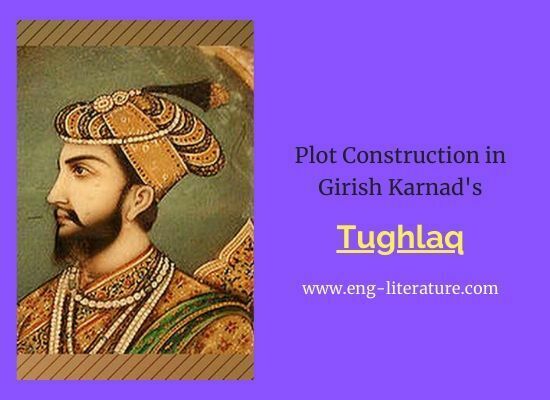 Girish Karnad’s Tughlaq deals with the last five years of the reign of Muhammad –Bin-Tughlaq. The playwright has crafted and well-handled plot with superb-craftsmanship. This has been done in the interest of dramatic effectiveness, and in the finest tradition of Greek tragedies. But the three unities of time, place and action have been flouted. The action of the play takes place first of all in Delhi in the year 1327, then on the road from Delhi to Daulatabad and lastly in and around the fort at Daulatabad five years later.

The unity of action implies that all the episodes in the play must be knit together to form a whole. Not a single episode or incident may be removed from the structure without a loss. In Tughlaq there are many superfluous incidents. The episode of Aziz and the Hindu woman with a sick child, and also of Aziz and the man and woman with six illegal children can be removed from the play without any loss of interest Karnad has also added a sub plot to the play. It provides dramatic relief in the manner of the tragedies of Shakespeare, but the tragic-effect is no way weakened by it. Indeed, Tughlaq is a tragedy of intrigue. There are a number of murders both reported and actually done on the stage. It would have been too horrible and unbearable without the dramatic relief provided by the sub-plot.

Both incident and situation are correlated with characters. Events and incidents which originate from the paradoxical actions of the protagonist, Tughlaq and his opponents have been organised into an artistic whole. The devices of parallelism and contrast have been vividly employed. The plot is based on opposites and paradoxes, intrigues, coherently brought under the discipline of art, form its main basis.

I.R. Anantha Murthy Says: “Both Tughlaq and his enemies initially appear to be idealists; yet, in the pursuit of the ideal, they perpetrate its opposite. The whole play is structured on these opposites the ideal and real, the divine aspiration and the deft intrigue.” The dramatist introduces tension and conflict, which are essential for plot in the very beginning and all events and actions of characters intensify conflict until it reaches the climax.

The orthodox Muslims are annoyed by Tughlaq‘s idealism, humanism and departure from the practice of the religious tenets in administrative matters. The old man who represents the orthodox segment of Muslim society, introduces the note of dramatic conflict with his words: “God, what’s the country coming to.” The Young man supports Tughlaq and says that the country is in perfectly safe hands. It is evident that this is a conflict between the old and new, between orthodox religion and modernity which are embodied in Tughlaq and his orthodox opponents. As the plot advances the conflict develops.

The Sultan who is a curious mixture of the ideal and the obnoxious has an intriguing nature. He sends his major opponent Sheikh Imam-uddin as a royal envoy to rebellious Ain-ul-Mulk. The Sheikh is treacherously killed. This malicious and barbarous misdeed perpetrated by Tughlaq intensifies the conflict with the rebellion of Amirs, Sheikhs and Sayyids who hatch a conspiracy under the leadership of Shihab-uddin to murder Tughlaq at prayer time. Ratan Singh who masterminds this conspiracy clandestinely informs the Sultan about it. He takes all precautions, arrests Amirs, etc. and inhumanly kills Shihab-ud-din.

Rebellions become quite common and consequently Tughlaq becomes revengeful, disappointed and frustrated. The capital is shifted from Delhi to Daulatabad hurling death and disaster on countless people. The Sultan’s step-mother gets Najib, who is considered Tughlaq‘s evil genius, killed. He sentences her to death. The conflict reaches the climax. Tughlaq’s viciousness increases but with every crime and murder he becomes more disillusioned and frustrated. The play ends when Tughlaq is tethering on the brink of madness and cannot offer prayer to which he attaches great importance. The denouement lacks in tragic intensity and depth. M.K. Naik says:

“However, Tughlaq fails to emerge as a tragedy chiefly because the dramatist seems to deny himself the artist’s privilege to present an integrated vision of a character full of conflicting tendencies.”

Prayer has been used as the leitmotiv in Tughlaq. Tughlaq killed his father at prayer time. The Muslim Amirs, Sheikhs, etc. conspire to murder Tughlaq at prayer time. In the beginning Tughlaq is very particular about prayer. Everyone has to pray five times a day because that is the law. When he is at the height of frustration he bans prayer in his kingdom and when it is reintroduced after an interval of five years on the arrival of Ghiyas-ud-din Abbasid he sleeps soundly. Both Tughlaq and his opponents use prayer as a political strategy. U.R. Anantha Murthy rightly says: “That prayer, which is most dear to Tughlaq is vitiated by him as well as his enemies, is symbolic of the fact that his life is corrupted at its very source. The whole episode is ironic.”

The sub-plot related with Aziz and Aazam runs parallel to the main plot. It is employed for the purpose of burlesque. In other words, it is introduced in the way of ridicule. Such, burlesque-parallelism is a singular feature of the plot of Shakespeare’s plays as also of Tughlaq. Aziz who assumes various disguises from start to finish is a wily time server who is not punished for his misdeeds but is rewarded by the Sultan. The under plot is characterized by suspense and surprise.

There are five comic scenes which take place in the bazaars and in the crowds. However, the sixth scene takes place in the palace. Though a comic scene, it is highly ironic, and the irony lies in the fact that Aziz who claims to be the best follower of the Sultan who has faithfully carried out his policies over the years and who has also murdered Ghiyas-ud-din Abbasid, is not punished, but is actually rewarded. He is sent as an important officer to Deccan, from there he has to go to Arabia, and then disappear on the way. All this is a caricature of the main or serious plot of the play.

In the end, there is chaos in the far flung empire of Tughlaq. There is drought and famine, people are starving and dying in their thousands. If they murmur or grumble they are brutally slaughtered. There is revolt all around and the rebels from different directions are marching on the capital. And confusion is made worse confounded when Tughlaq orders the people to return to Delhi, the original capital. This external chaos well reflects the spiritual chaos in the Sultan. He is unable to sleep or to pray. As he says to Barani towards the end of the play,

“I was trying to pray-but I could only find words learnt by rote which left no echo in the heart. I am tethering on the brink of madness, Barani, but the madness of God still eludes me. (Shouting) And why should I deserve that madness? I have condemned my mother to death and I’m not even sure that she was guilty of the crime….”