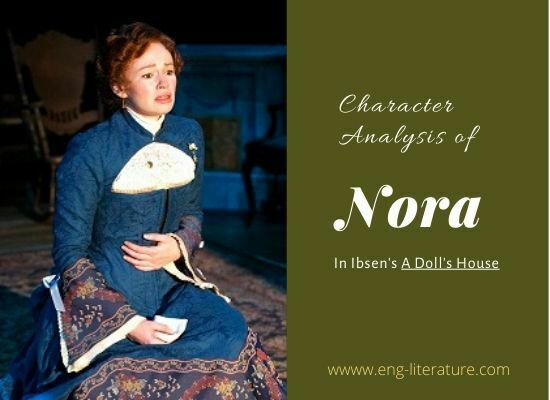 Nora, the protagonist is the doll in Henrik Ibsen’s play, “A Doll’s House”. In order to be an ideal wife, she surrenders herself submissively and calmly to her husband, Torvald Helmer. She is very shy and reserve and tires to wrap her into the shell to hide her personality thus makes her character more complicated and complex.  Although they belong to a middle class family, suffering from economic problems still they are managing to live happily.

Nora, the heroine in Ibsen’s drama “A Doll’s House” is a true representative woman of Victorian era as throughout the play Ibsen has portrayed her as a loving, caring and devoted daughter, mother and wife. From the beginning of the play we get the impression of Nora as an organized woman who lovingly takes care of her house. She keeps the house clean and places the things orderly.

Nora is a cheerful woman who enjoys her life as we see her in the beginning celebrating Christmas with acute enthusiasm. She is a sympathetic woman who also cares about subservient. She brings a gift for her maid on the occasion of Christmas which shows that she is a good human being by nature.

Nora lives in the world of imagination. Now that her husband’s salary has been increased she is much excited thinking that there would be no economic problems thereafter. “Now that you’re to earn a big salary”.(Ibsen, Act 1) Torvald, on the other hand does not like her habit of spending much money and therefore calls her “spendthrift”.

In spite of all his positive traits Nora believes that borrowing can be a solution of their financial problem at the end of the month “We can borrow till then” (Ibsen, Act 1) while borrowing money became a cause of their break up. She could have resolved the issue by disclosing it to her husband before giving a chance to Krogstad, a selfish person.

Though Nora was a young woman, living in the world of imagination she loved her husband from the core of heart and she tried to mould herself according to his wishes. She loves him so much that she enjoys being dependent on him and asks him to choose thing for herself. “I really can’t think of anything-unless, Torvald” (Ibsen, Act 1). One aspect of her love surfaces when she takes loan for her husband’s health through forgery. Here she commits forgery out of her love because the doctors had clearly declared that Torvald’s improvement was not possible unless he had been taken to some airy place.

After taking the loan, a woman who was enjoying her life as a Doll wife has turned into a practical woman who struggles day and night to pay back the loan she has taken. She used to work late at night to earn money. “Often I was desperately tired; but all the same it was a tremendous pleasure to sit there working and earning money.” (Ibsen, Act1)

Nora is a caring mother who thinks it her responsibility to impart manners to her children. When she finds that she has done something wrong and has violated the rules of the society, her conscious pricks her that she is not a suitable mother. Through this Ibsen has highlighted the fact that it was a male -dominated society which implies that mothers are totally responsible for upbringing their children. If the child is morally not strong then the blame will go to the women of the society.

Apart from her positive traits in her personality we also come to know that she was a deceptive person who tries to do things according to her own wishes. She is a kind of a person who hides things from her husband.

As in the beginning of the play, her husband asks her not to eat sweets she lies to him by saying that “I shouldn’t think of going against your wishes”.(Ibsen, Act1) This shows she is a liar who tells lies frequently in her daily life and is not ashamed of it. There is another instance of her lying when Helmer, after seeing Krogstad coming out of his home, asked Nora “has there been anyone here?” (Ibsen, Act2) she replied with “no”.

Nora’s crisis begins when her husband takes the charge of Bank Manger. Mr. Helmer is determined to fire out Krogstad, a dishonest person in his bank who once forged signature for some illegal purpose. But on the other hand, Krogstad also came to know that Nora had forged her father’s signature in order to get money from him. At this revelation, he plans to exploit Nora in order to retain his position in the bank.

So when Krogstad comes to know that Helmer is going to dismiss him from his post which, he starts blackmailing Nora and threatens that he will reveal her crime if her husband fired him. Naturally, Nora tries to influence her husband but he could not understand the real matter taking Nora as a simple child who cannot understand the secrets of business.

Despite her utmost efforts to save Krogstad’s current position, the latter discloses Nora’s act of taking loan to her husband through a letter. When Helmer discovers that Nora has forged her father’s name he is ready to disclaim his wife without realizing her passion and that she took loan, after all, for his treatment purpose. At Helmer’s harsh reaction against her act of borrowing, Nora sees that her husband is not worth of her love and immediately leaves him.

In terms of her moral character Nora does not prove herself to be immoral at anytime. At times she thinks of taking loan from Mr. Rank but soon she changes her mind when it appears that Mr. Rank has some loving passions for her in his heart. In fact, she does not like to take privilege from her lover. This is the main reason that she adopted a risky way of getting loan by an act of forgery which proves to be catastrophic for her marital life.

Of all the qualities and characteristics of Nora, the most important aspect of her personality is that she is a loving, caring and loyal to her husband irrespective of the economic problems. Though Nora knows about the cannons of society that a Victorian woman cannot take loan without the permission of her husband but she loves her husband so much that she ignores such a serious issue and handles it as a courageous woman. Her love was so pure that she had been struggling throughout her life. Nora always tries to make her husband happy. In fact, she becomes a doll in the hands of her husband.

Nora has always been treated by her husband as his property, as his possession, as his doll-wife. She can no longer live in the doll’s house in which she has been living for eight years, obeying every wish and whim of her husband.  Her decision to leave her husband is certainly heart-breaking for us. It is a painful renunciation on her part. Nora is leaving not only her home and her husband but also her children.

In short Nora grows in stature, and is purged by suffering. When everything lies in ruins around her, she emerges strong and independent; she is in the process of attaining complete maturity at the same time, her action at the end points to a freer and more honest humanity in a healthier society. In this sense she is a modern tragic heroine and the play is a modern tragedy.