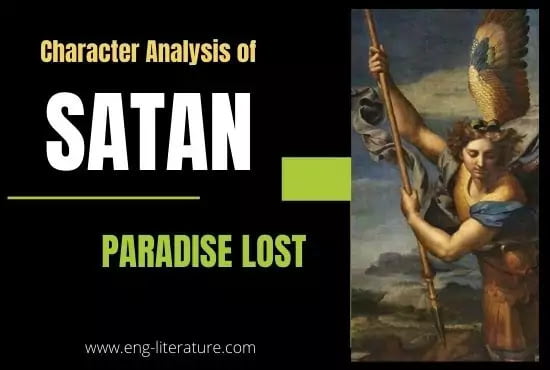 It has been said by Raleigh that Milton lavished all his power, all his skill and in spite of himself the greater part of his sympathy on the splendid figure of Satan. In Book I of Paradise Lost, Satan appears to be an indomitable fighter against the autocracy of God. He is presented as a heroic figure fighting a relentless battle against the arbitrary act of God for elevating his son above the angels. Milton himself fought against feudal monarchy and defended the execution of Charles I. So Milton put much of himself into the character of Satan and makes him the embodiment of the Renaissance spirit of challenge and adventure.

Soon after the invocation to Book 1, we find Satan fallen in the Lake of Fire. He was overthrown by God from Heaven to Hell because he dared to challenge the supremacy of God:

Against the Throne and Monarchy of God

Yet, Satan is an important personality in the theme of Paradise Lost. He is instrumental to the fall of man from the Paradisal bliss. He remains prominent all through the earlier Books of the epic and appears as the protagonist of the entire action, at least in the opening Book.

From the beginning, Satan is presented as a villain-hero. He is a plotter (the etymological meaning of ‘Satan’). He is like the villain-heroes Marlowe and Shakespeare, ambitious, revengeful, boastful, deceitful cunning and melancholic.

The opening Book presents Satan as the central figure. His fall, humiliation and resolve to wage an uncompromising war against God are presented in the Book. His powerful speeches, five in number, form the assets of the opening Book, and they serve to bear out some typical traits of his character- his iron determination, efficient leadership, heroic spirit and commanding personality.

It is to be noted in this connection that Milton‘s original plan was to write a tragedy on the theme of Paradise Lost. Had he actually written such a drama, he might have made Satan his tragic hero. In fact, in his conception of the tragic character, Milton is found to have invested the arch-fiend with a heroic grandeur, which exclusively belongs to a typical hero of a classical tragedy. Valour, spirit, determination and the power to inspirit and persuade are all the virtues of Satan, and these are all the qualities of a grand tragic hero.

Of course, Milton’s intention in Paradise Lost is not to idealize Satan but his sole project is to disturb and annoy God in whatever way he can.

Satan is definitely an evil force, yet, in Milton’s representation, he is invested with the grandeur of a tragic hero, of course, like a villain-hero, like Macbeth, or a villain-heroine like Medea.

Satan is one of the highest angles in Heaven and the nobility of his station remains even after his humiliating fall among the fallen angels. Something sublime and spirited still shines in him and he exhibits this in his heroic words and resolute spirit. He stands, even after his tragic defeat and fall in hell, like a tower, with a firm determination to retaliate, and not to yield to any pressure or to surrender helplessly to despair. He does not approve Beelzebub’s despondent views and give out a clarion call of inspiration:

“Fall’n Cherub, to be weak is miserable,

This is truly befitting to a grand tragic hero.

Milton’s Satan, as already noted, is a villain-hero, and as such, he derives pity and admiration even in his failing and never appears totally despicable, like Edmund, Goneril, or Regan (in King Lear). He is no timid or cowardly personality, but one who bears a titanic energy and a gigantic will-power. He does not stoop low to think himself inferior to God or to submit to His authority.

Satan’s leadership comes out here, revealing his authority and position among the fallen angels. As an effective leader, he inspires his fallen followers to rise from their state of stupor. Satan’s speech rousing his followers is profoundly ironical. He concludes with a trumpet call:

‘Awake, arise, or be for ever fallen’.

What, however, specifically characterizes Satan is his firm opposition to all forms of domination and subjugation. He champions liberty, denounces slavery and prefers to reign in hell than to servility in heaven.

“Better to reign in hell, than serve in heaven.”

Satan’s voice here is against tyranny and oppression and there is nothing evil or villainous in it. He is here an inspiring hero, and not a notorious villain.

Along with his spirit of liberty, Satan possesses a steady determination. He stands out resolutely in his opposition to God. He is, no doubt, overthrown and expelled, but he admits no defeat, allows no despair to overwhelm him, but rather plans to work, with a steady desire, to avenge what he considers God’s injustice and tyranny to his followers and himself. His declaration in unequivocal and echoes his courage and determination.

“What though the field be lost?

All is not lost; the unconquerable will …….”

Satan is an egoist. He is haunted with the sense of his injured merit. This is the cause of his staunch opposition to God. But in his opposition to Him, he does not plan recklessly. His heroic spirit, of course, is not definitely ready to surrender to any threat or tyranny. Nevertheless, he is practical and prudent in his measure and proposes to wage an uncompromising war against God, by force or guile, according to the exigency of the situation.

Milton’s delineation of Satan’s character bears much his instinctive sympathy for his rebellious and uncompromising spirit. In fact, Satan seems to have a self-projection of the poet himself. Milton’s own love for liberty and hate for tyranny are particularly evident in his representation of Satan’s character. Of course, Satan is the evil personified, and can never be the ideal of a. devout Puritan, like Milton.

Thus Milton presents Satan as a mixed character. With evil passions in which good lingers. He is not the hero of the epic. Yet, he remains a grand epical personality and such a personality is seldom found elsewhere. In his fearless defiance, steady determination and protestant spirit, he stands out heroically as Aeschylus’s Prometheus or Euripedes’s Medea. He is definitely not a thorough villain, like Iago or Edmund. He is more likely to be placed by the side of Macbeth as a villain-hero.