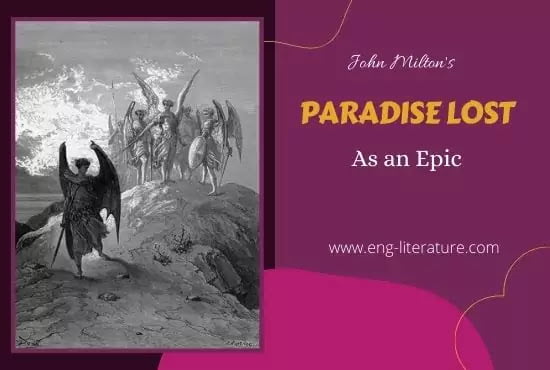 Is Paradise Lost an Epic?

The epic poem has been regarded in all ages and countries as the highest form of poetry and there are great epics in almost in all the literatures of the world. Paradise Lost is the supreme masterpiece of epic poetry in English literature and rivals the works of the classical poets like Homer, Virgil etc. It is an “adventurous song” that “pursues things unattempted yet in prose and rhyme”.

Epic poetry undertakes to teach the most important truths by the most pleasing precepts and therefore relates some great event in the most affecting manner. The key characteristics of epic poetry are:

(i) The subject or theme of the epic must be one, great and complex action. It must be either historical or at least probable.

(ii) The action of the story must be developed by a due mixture of narrative, dialogue and soliloquy. There are the dramatic and introspective elements in an epic. Minuteness of details and episodical digressions should form a part of epic treatment.

(iii) The principal characters must belong to the highest classes of society and must be elevated in their ideas, the general interest of the story must be concentrated on the hero.

(iv) The language must be simple, severe and dignified, ‘perspicuous and sublime’, as Garnett calls it. The measure or versification must be sonorous and dignified as befitting the subject.

(v) Lastly, the epic must teach a deep moral. These are the essential elements that every epic must possess to be worth the name.

Besides these, there are other epic conventions as Invocation to the Muse, epic similes, use of permanent epithets, repetition of lines and passages and the like.

Epic features are prominent in the first book of Paradise Lost. The first book begins with an Invocation to ‘Heavenly Muse’ in conformity to epic convention. In later prologues, Milton gives his Muse, a classical name Urania, goddess of astronomy, a fitting choice for a poem leading to Heaven like Dante and Tasso, Milton follows Virgil and Homer with one notable difference.

Milton asks his Muse to lead him higher than the “Aonian Mount” of the classical poets, since the subject of his epic is ‘higher than theirs.’ Thus Milton’s prologue begins as a classical invocation but with one exception that it rises to a Christian prayer to the Holy Spirit.

The prologue states the subject of the epic as ‘man’s first disobedience’. Milton is following his classical masters not only in the immediate introduction of his chief subject, but in the grammatical structure, which is highly Latinate. Milton however intends to transcend the classical with the aid of the ‘Heavenly Muse’ by dealing with the most profound of all problems, “to justify the ways of God to men.”

Its subject is sublime and unique. It is the Fall of Man, an event of the greatest significance. To quote Dr. Johnson:

”The subject of Milton is not the destruction of a city, the conduct of a colony, of the foundation of an empire. His subject is the fate of the worlds; the revolutions of heaven and earth; rebellion against the supreme king, raised by the highest order of created beings, the overthrow of their host, and the punishment of their Crime; the creation of a new race of reasonable creatures, their original happiness and innocence, their forfeiture of immortality and their restoration to hope and peace”. The Bible had supplied him with the theme.”

The scene of the action is universal space. The time represented is Eternity. The characters are “God and his creatures”. Surely a loftier theme cannot be conceived by human imagination.

Again the action is one, entire and great. The unity of action is strictly adhered to. Milton plunges into the story at once by opening the epic with an infernal council of the rebel angels that plots the fall of man, which is the action he proposes to celebrate. The story develops without a hitch or discord, by means of quick narrative, dialogues, soliloquies etc.

Of the majesty, novelty and variety of the characters in the poem there cannot be two opinions. In this respect Milton has outdistanced even Homer. There are four principal characters in the story, – God, Satan, Adam and Eve.

“We see man and woman in the highest innocence and perfection and in the most abject state of guilt and infirmity.”

Satan is certainly not the hero of Paradise Lost. Satan represents a rejection of the conventional concept of the hero. In the first book, Milton presents the grandeur of evil. The speeches of Satan are magnificent and his figure is impressive – they represent the attractiveness of plausible evil. The villain-hero is evil on the grand scale, in speech as well as in action. Satan is presented in the first book as ambitious, proud, revengeful, deceitful, cunning and melancholy. His passion, energy and courage in his spoken words sweep away his followers. He impresses us as a great leader. He shows an indomitable courage and unflinching will:

“To be weak is miserable

He exhorts his followers with high-sounding rhetoric:

“All is not lost ? the unconquerable will

And study of revenge, immortal hate,

And courage never to submit or yield

And what is else not to be overcome?”

The moral of the poem is intrinsic and essential and not obtruded. Milton’s purpose is to “vindicate the ways of God to man, to show the reasonableness of religion and the necessity of obedience to the Divine Law.” This moral has been conveyed through the fable, most artfully constructed and beautifully told.

In point of style and versification, Paradise Lost is grand and the highest example of the sublime in literature. As Matthew Arnold has observed, “In the sure and flawless-perfection of rhythm and diction Milton is as admirable as Virgil or Dante and in this respect he is unique among us.”

He tries to adopt Latin construction and Latin idioms in English. He even uses Latin words in their Latin senses, giving to the English language a kind of alien strangeness. His style is marked by condensed phrases and epithets, fitness of words to things, power of digression without loss of power to return, a majesty in the conduct of thought and a music in the majesty which fills it with solemn beauty.

Indeed, the name of Milton has become a synonym for sublimity and stateliness. The poem is written in grand blank verse and had the majestic march of music quite in keeping with the subject matter. These qualities fulfill the ultimate need of a grand style which is an essential epic feature of the poem.