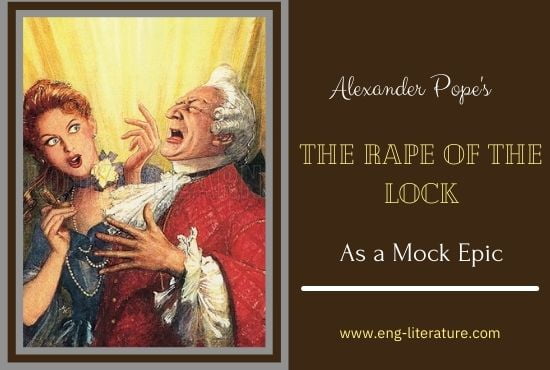 The Rape of the Lock as a Mock Heroic Epic

“The true genius of a mock-heroic lies”, observes Prof. Courthope, “in travesting the serious epic, in bringing all the leading features the epic machinery, lofty incident, character and style to the exaltation of a trivial subject, must no doubt have a moral bearing, but the satire ought not to be too apparent.” Pope’s The Rape of the Lock is the perfection of mock heroic poetry. It is a burlesque or parody of the epic conventions, making them comical or ludicrous by applying them to trivial subject matter.

The Theme of the Rape of the Lock

The theme of the poem is the cutting of a lock of a lady’s hair. It is too trivial a theme to be treated in an epic form. There is nothing heroic in it and yet Pope has given it the dignity and exaltation and epic treatment. The Baron, borrowing a pair of scissors from one of the maids of honour, Clarissa audaciously cuts off one of the two curling locks of Belinda‘s hair. The liberty was resented by the lady and the result was a breach between two families, in the hope of healing which Pope wrote the poem. So far the real facts coincided with the fictitious feats.

The Mock-epic Elements in Rape of the Lock

First, every epic poem deals with one or the other passion which distinguishes it from other poems of the species. Just as anger and terror are the peculiar passions of the Iliad and soft and tender ones are seen in the Aeneid, similarly coquetry may well be regarded as the reigning passion of The Rape of the Lock.

Secondly, the epic opens with an invocation to some god or goddess. Pope, no doubt, following the epic convention, invokes the Muse and purposes his themes but his is a very funny way:

A well-bred lord to assault a gentle belle.”

Thirdly, an epic contains many episodes. In The Rape of the Lock, Pope has also introduced several episodes. In Canto III he has dignified the game of Ombre, which is the prelude to the central action.

Fourthly, supernatural machinery is also introduced in an epic. We see the gods and the goddesses playing significant role in an epic. They figure prominently in the epics of Homer and Virgil, while the angels and the devils fill the epics of Dante and Milton. But Pope uses the gnomes and the sylphs of the Rosicrucian system and calls them ‘light militia of the lower sky.’

Fifthly, Pope has also introduced the vows of the heroes in the epic style but his is the mock, not the epic, tone Baron’s propitiating the spirit of love is in the real mock-heroic fashion. Baron’s vows ‘by this lock, this sacred lock, I swear’ remind us of the vows of Achilles in Homer’s Iliad.

Sixthly, combats and battles are also to be noted in an epic. Brave heroes are seen in action. In Canto V Pope also engages his ladies and gentle men in battle. The description of the battle is on the lines of the battles and combats in the epics of Homer and Virgil. In a truly mock heroic style Pope makes Belinda meet the Baron in a single combat and overwhelm him by throwing ‘a charge of snuff just where the breath of life his nostrils drew.

Seventhly, the descriptions of the weapons also support the mock heroic spirit. The petticoat of Belinda is ‘the sevenfold fence’. They fight but

“Not common weapons in their hand are found,

Like gods they fight, nor dread a mortal wound.”

Thalestris ‘scatters death around with both her eyes’. Chloe kills Sir Plume with a frown but as she smiles, he revives again. Finally, Belinda overcomes the bold Baron with ‘a charge of snuff and attacks him with ‘a deadly bodkin’.

Eighthly Pope makes his hero a woman and not simply any woman but Belinda. In the earlier epics the heroes were god-like Hectors…. Pope completes the mockery by widening the gulf between Hector and Belinda.

Ninthly, the note of irony and affection in the poem completes the mock-heroic style. A toilet is described with the solemnity of an altar raised to the goddess of vanity, and the history of silver bodkin is given with all the pomp of heraldry.

Lastly, the flight of Umbriel to the cave of Spleen reminds us of Satan’s journey in Paradise Lost to the newly created world and of spirits to subterranean regions.

To conclude the mock-epic style, Pope avoids commonplace and outworn expressions in his poem, for he believed that ‘the use of pompous expression for low action is the perfection of the mock heroic’. Thus he pompously describes a pair of scissors as ‘two edged weapon’, “little engine’, ‘glittering forfex’, ‘fatal engine’ and ‘meeting points’.

“the most exquisite monument of playful fancy that universal literature affords.”