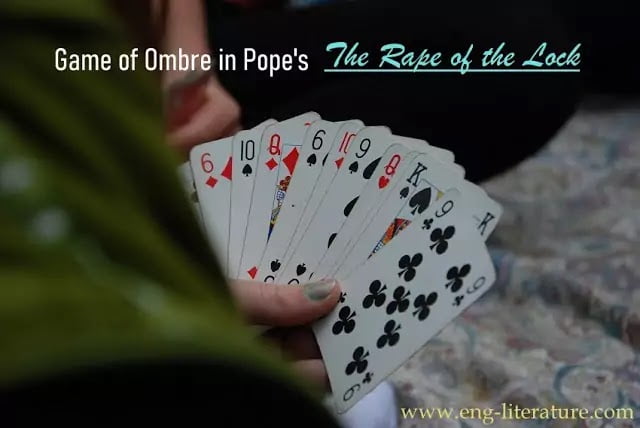 The episode of the game of Ombre that occurs in Canto III of the poem, The rape of the Lock is an after-thought on the part of the poem. It did not occur in the original version of the poem, which was too slight and thin, containing writing a mock-heroic on the trivial thing (the cutting of the lock of a fashionable belle by a frivolous knight), the poem was to be enlarged into a full-fledged miniature epic. The mock-heroic was intended to bring about the wished-for rapproachement between the two families by laughing at the matter.

Thus the episode of the Ombre game was introduced to fulfill the epic feature of the poem. A war is a sine qua non in a poem that pretends to be an epic. It occupies a very important space in the story and is practically the basis of every epic action. Homer, Virgil and Milton have conformed to this convention in their epics. And the wars in Homer and Virgil have been described with all the grandeur and vigour that their imagination was capable of. The days of epic wars were gone.

Pope, therefore, adopted a sexual war, – war between two sexes, as one of the chief events of his story. And in the treatment of this, modes of ancient epics and of the medieval knightly tournaments have been blended together. The poem thus becomes a romance and epic rolled into one.

“Belinda-now, whom thirst of fame invites

At Ombre singly to decide their doom.”

So it is a duel of sexes and Belinda is the feminine party. It is like an encounter between Baron and his Lady of the romances. The skirmishes or the sex war have been described under the playful imagery of the Kings, Queens, Knaves, Aces of the world of cards. The battle, with the initial rising fortune of the heroine its climax after the fourth trick, and its denouement in the ninth trick is like a vivid drama or an actual fight on me level green. All the trickeries, stratagems, wiles, treacheries, vicissitudes of fortune of a grim battle have been displayed. The pierced battalions united fall in heaps on heaps; one fate overwhelms them all. The whole passage is one of the heights of imaginative poetry. Nay, it is not merely a playful fancy, but a romantic imagination, that invests the ordinary with the unearthly light that diffuses over the whole description.

It is therefore unjust to regard the episode as purely supernumerary, contributing little to the development of the action. It cannot be said that cutting of the lock arises from it. Yet, there is a dark hint in the poem that the defeated Baron might have been actuated by a desire to retrieve his shameful defeat and claims the lock as a trophy of war to be kept forever. Whatever might be its importance in the action, it is not undesirable that Pope makes capital out of the comic detail and implied comparison with the grim earnest wars in the epics. Besides, as the picture of feminine folly and frivolity and the masculine gallantry, the description has a great importance. The maneuvers of the battle of cards are the same as those of the battle of sexes.