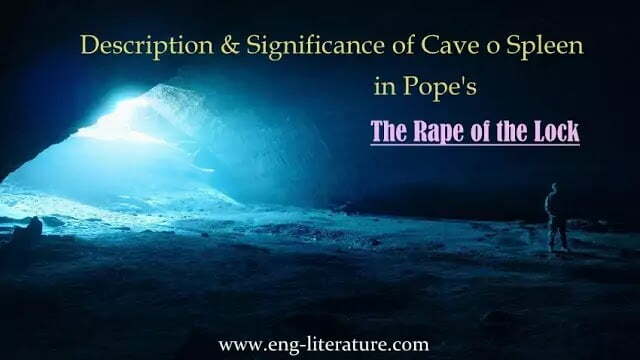 Significance of Cave of Spleen

When after the cutting of the lock of hair, the Baron exults over his great achievement and Belinda gives way to rage, resentment and despair, Ariel withdraws and Umbriel, a mischievous and trickstering gnome takes charge of her. In consonance with an epic convention, the poet makes Umbriel go down to the underworld, where in a dark and vapoury region stands the gloomy Cave of Spleen. It was a dismal cave, vaulted with vapour. No cheerful breeze blows over the place; the only wind is the east wind that causes moroseness. Sunlight cannot penetrate into the cave. There Spleen lies on a pensive bed, sighing for ever with Pain at her side and Megrin at head i.e., side pain and headache).

Two handmaids attend on her. They are Ill-nature and Affectation. The former is an old maid, with wrinkled skin and is arrayed in black and white clothes. Her hands are full of prayers for different times of the day, while her heart is full of abusive satires. Affectation is slim and sickly. She pretends to be young, paints her cheeks, talks in lisping manners, hangs her body aside in an affected pose, faints on her bed only for show of illness or sinks in exhaustion to show her pride.

The cave is always filled with vapour and various fantastic images rise in mists in that place. Glaring fiends, snakes standing erect on their 153 coils, pale ghosts, gaping tombs etc. abound in the cave. Human beings changed into various forms under the effect of melancholy throng there. Thus there is the woman who thinks herself to be teapot, holds out one arm and bending the other, there is another who imagines herself as an earthen jar, another as a bottle etc. There is a man who thinks that he has become pregnant.

This episode of the Cave of Spleen is a parody of a well-known epic feature namely descent into the underworld by living men. Thus in Homer’s Odyssey ix, Ulysses (Odyssey) descends into the dark Hades and in Virgil’s Aeneid vi, Aeneas does the same. The poet derives the description of the Cave of Spleen, from the Cave of Envy in Ovid’s Metamorphoses. The various fantastic images that are catalogued here illustrate the unhealthy and distorted lives that men and women live under the effect of hypochondria, ennui, sexual frustration, etc. These indicate the lurking fear of the horrible possibilities that may develop in the beaux and belles under frustration and under which they are always labouring.

Thus beneath the outward veneer of gaiety, glitter and beauty of the care-free lives of the beau-monde, there are mental disorders produced by inhibited sex life. There is the figure of III-nature personified as an ‘ancient maid’, with hands always full of prayer and heart full of satires. This is the threatened fate of a disdainful belle – “she who scrons a man, must die a maid,” as Clarissa says. “The whole episode must profoundly affect our view of Belinda herself.”