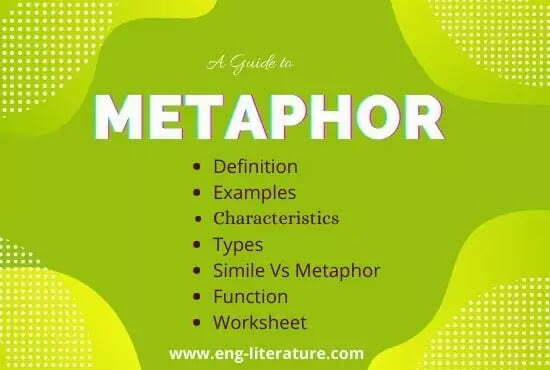 The word ‘metaphor’ has come from the Greek ‘meta’, meaning ‘change’ and ‘phera’ ‘I bear’. In this figure, there is a transfer of a word from one object to another whereby a comparison is implied or an identity is shown though not formally or directly expressed.

Metaphor is an implied comparison made between two different things or ideas.

The metaphor is an informal or implied simile. Here the words, as, so, like, etc., which are used in a simile to show clearly the likeness between two things, different in kind, are dropped. The comparison exists implicitly in a statement of identity between two different objects.

Here a comparison is, in fact, implied in the mere use of the term. Thus, the sentence-Our eldest son is the star of the family is a metaphor. Here a comparison is made between the son and the star, but it is not expressed by such words as, like, as, so, and so on. The likeness is only implied in the sentence. Similarly, had Burns said “O my love is red, red rose”, there would have been a case of metaphor.

(i) A comparison is made.

(ii) The comparison is between two things different in kind.

(ii) The point of comparison is implied. [These essential features are all evident in the examples given above.)

N.B. It is to be carefully noted that in a metaphor, as in a simile, the things or subjects compared must differ in kind.

(1)His crypt the cloudy canopy. -Hardy

This is a metaphor.

Here an implied comparison is made between two things, different in kind.

Here a comparison is made between ‘crypt’ and ‘canopy, two different things, and the point of comparison is the covering, given by either of them. This is, however, implied.

[Here a comparison is instituted between two different things, without saying so. The likeness is embodied in the sentence implicitly.)

To such a sudden flood of mutiny. – Shakespeare

This is a metaphor.

Here an implied comparison is made between two unallied things.

Here a comparison is made between flood’ and ‘mutiny’, two different things, in respect of force. The point of comparison is implied.

(3) Life seems to be an utterly unimportant by-product. -Jeans

This is an instance of the figure of speech, metaphor.

Here consists in an implied comparison between two unallied objects.

In the present case, a comparison is made between ‘life’ and ‘by-product in regard to their insignificance.

These two are unallied elements. The point of comparison is here not explicit, but implied.

Shall yield to me. -Abercrombie

(5) I leant upon a coppice gate When frost was spectre gray. -Hardy

[‘Frost’ is compared to ‘spectre’. These two are unallied objects. The point of comparison is implied.]

(6) The curfew tolls
the knell of parting day. -Gray

[An implied comparison is made between ‘curfew’ and ‘knell’, two unallied objects.]

[The implied comparisons are made between thou’ and ‘transitory flower’ and ‘favour’ and ‘sun’.]

Of the dying year, to which this closing night

Will be the dome of a vast sepulchre.

[Here a comparison between ‘closing night’ and ‘the dome of a vast sepulchre’, two unallied objects, is made. The point of comparison is implied.]

(9) Lowliness is young ambition’s ladder. –Shakespeare [‘Lowliness’ and ‘ladder, two unallied elements, are compared. The point of comparison is implicit]

(10) Hope is the sauce of life. In the above case two nouns ‘hope’ and ‘sauce’ are compared implicitly.

(12) His efforts were crowned with success. [ In each case, a verb and a noun-drink and life/crown and success are compared implicitly.)

(13) No tear could melt his stony heart

(14) Golden opportunities are rare in life. [Here adjectives and nouns-‘stony’ and ‘heart’ and ‘golden’ and ‘opportunities’–are impliedly compared.]

Sometimes, the inappropriate use of metaphors gives rise to the faulty metaphors known as mixed metaphors.

This arises when metaphors, drawn from different sources are combined in the same subject.

“It is sufficient to extinguish the seeds of pride”

– the metaphor is faulty, because pride is here compared to flame as well as seeds. If the verb ‘extinguish’ is to be used, then the word ‘seeds’ is to be changed to ‘flame’. Again, if the noun ‘seeds’ is to be retained, the verb ‘destroy’ or ‘uproot’ ought to have been used.

The sentence,” I smell a danger, but I will nip it in the bud”, is also an instance of the mixed metaphor, for a faulty comparison of one subject with two different things is here made. In the following lines from Addison

“I bridle in my struggling Muse with pain

That longs to launch into a bolder strain.”

– another familiar case is found, for Muse is here compared by the poet to three different things a horse, a ship and a musical instrument. Shakespeare’s “To take up arms against a sea of trouble” may also be taken as a case of the mixed metaphor. Again, an intricate involvement of a metaphor within a metaphor is found in Shakespeare’s

“O, how shall summer’s honey breath hold out

Against the wrackful siege of battering days.”

A metaphor becomes strained, when the comparison becomes far fetched, or when the figure is dragged into irrelevant details. Such a strained metaphor tends to become obscure.

The following passage from Shakespeare’s Macbeth may be taken as an example of the strained metaphor :

His silver skin laced with his golden blood.”

Here the comparison between gold and blood is far-fetched.

Next may be taken the famous passage from Julius Caesar

“There is a tide in the affairs of men,

Which, taken at the flood, leads on to fortune :

Omitted, all the voyage of their life

Is bound in shallows and in miseries.”

Here the metaphor is both improper and strained. It is wrong to consider that man experiences only one tide in his life. Again, there is actually no justifiable reason for connecting together two facts – to miss a tide and to sail in shallows. Lastly, the union of two words ‘shallows’ and ‘miseries is inappropriate, for the former is metaphorical, while the latter, literal. In all cases, the metaphorical statement seems strained, not spontaneous.

In a dead metaphor, the identity shown is so common a usage that the discrepancy involved in its seems to cease almost or becomes dead.

English prose and poetry throughout the centuries have been enlivened and enriched by the use of metaphors. “Metaphor, Dr. Johnson observes, is a great excellence in style when used with propriety, for it gives you two ideas for one: conveys the meaning more luminously and generally with a perception of delight. Needless to say, it excites the fancy and helps one to imagine things more vividly. Martin remarks: ‘Metaphors, skillfully handled, are very effective and add ornament and, what is more important, clearness and force to writing.’ In the opinion of Sterling, a metaphor is usually a more lively and more pleasing mode of illustration then a simile, as it is more suggestive and leaves room for an agreeable exercise of the mind is detecting the points of resemblance implied in it.

As a metaphor differs from a simile only in form, not in substance, every simile can be compressed into a metaphor, and every metaphor can be expanded into a simile. A metaphor may, thus, be considered, Nesfield reminds us, as an ‘informal or implied simile.’

There is a definite way of turning a metaphor into a simile. First, we shall have to find out the exact point of resemblance between the objects compared, then we should assign to each its proper action finally, comparison. the resemblance between these actions must be expressed by marker of While a simile carries within its expression a viola marker of comparison (like, so, as, such, etc.), a metaphor carries no such sign. Thus, ‘My love is like a red rose’ is a simile, while ‘My love is a red rose’ is a metaphor,

To a green thought in a green shade. (Marvell)

The news of her elopement was a dagger to his heart.

The yellow fog that rubs its back upon the window-panes.(T. S. Eliot)

Will be the dome of a vast sepulchro. (Shelley)