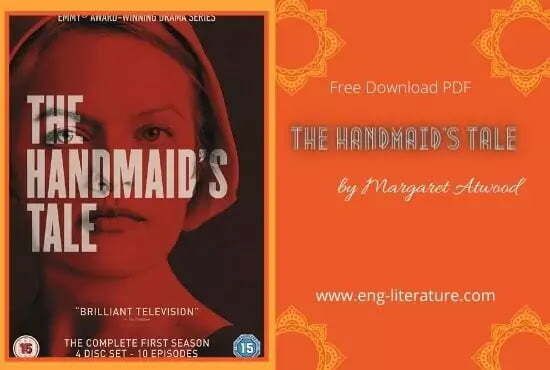 Provocative, startling, prophetic, and more relevant than ever, the acclaimed dystopian novel by Canadian author Margaret Atwood, The Handmaid’s Tale has become a global phenomenon. The book tells the story of Offred, a Handmaid in the Republic of Gilead, where women are prohibited from holding jobs, reading, and forming friendships. She serves in the household of the Commander and his wife, and under the new social order she has only one purpose: once a month, she must lie on her back and pray that the Commander makes her pregnant.

The Handmaid’s Tale is what Atwood calls speculative fiction, meaning it theorizes about possible futures. This is a fundamental characteristic shared by both utopian and dystopian texts.  The possible futures in Atwood’s novels are usually negative, or dystopian, where the actions of a small group have destroyed society as we know it.

As a Dystopian novel, on the other hand, The Handmaid’s Tale is not necessarily predictions of apocalyptic futures, but rather warnings about the ways in which societies can set themselves on the path to destruction.

The Handmaid’s Tale was published in 1985, when many conservative groups attacked the gains made by the second-wave feminist movement. This movement had been advocating greater social and legal equality for women since the early 1960s. The Handmaid’s Tale imagines a future in which the conservative counter-movement gains the upper hand and not only demolishes the progress women had made toward equality, but makes women completely subservient to men.

Gilead divides women in the regime into distinct social classes based upon their function as status symbols for men. Even their clothing is color-coded. Women are no longer allowed to read or move about freely in public, and fertile women are subject to state-engineered rape in order to give birth to children for the regime.

Unlike a lot of contemporary dystopian tales that pack in as much action and heroism as they can squeeze into a few hundred pages, The Handmaid’s Tale is more of a sociological perception of the world we live in, or more so, the world we could live in. It looks at the gender divide and offers surprisingly accurate insights into how the world (sadly) works, despite the fact that it’s set in a dystopian future.

Gilead is a totalitarian theocracy meaning it’s a dictatorship run by a religious group on Eraser offer it is a handmade one of the limited number of fertile women left in America who have been collected stripped of their human rights and forced to bear children to the elite we follow our fringe journey as she attempts to survive this brave new world intermittently learning about her life before through a series of flashbacks.

The novel is set in a future version of the United States specifically Cambridge Massachusetts. Most of the population is sterile and birth rates have massively declined due to rising environmental degradation and sexually transmitted diseases claiming their desire to halt the declining birth rate. As their motivation the sons of Jacob have used military force to overthrow the Liberal Democratic American government and organizer new patriarchal society centered around reproduction.

The main character’s name is Offred which is not her real name but she says that no one is allowed to call her by her real name anymore because her name is forbidden she is a handmaid and his job in Gilead is to be assigned to married couples in order to bear their children.

Offred is assigned to the commander and his wife Serena Joy and they look like this probably every month when Offred is at the right part of her menstrual cycle she is required to have personal impersonal worthless sex with the commander. However when this is taking place Serena is required to sit behind her holding her hands and there isn’t a lot of talking or eye contact and  it’s a bit awkward and it’s quite hard to draw yeah and yes.

The novel uses a series of threads flashbacks to clarify what has happened in the years leading up to present day we find out that she has had an affair with a married man named Luke who had a daughter. We also find out that Offred was raised by her mother who had been a feminist activist and she had a best friend called Moira who was a tenacious rebellious lesbian who refuses to stand up against Gilead.

One day offered was turned away from her job she discovered that the sons of Jacob had overtaken the government through military force and had made it illegal for women to work and property Luke and Offred attempted to escape to Canada before their daughter was taken from them as since Luke was a divorcee their marriage was voided they were caught an Offred was taken to the red centre which is as scary as it sounds in the red centre women were indoctrinated and trained to be handmaids through violence coercion and biblical teachings.

She becomes a handmaid and is sent to a Commanders house where she meets him and his wife, Serena Joy. There, she is forced to have sex with the Commander monthly in order to bear children because of the drastically low birth rates. In this house, she is not allowed to move without permission but does go on frequent shopping trips with another handmaid, Ofglen.

Even in public, every citizen is watched secretly by the “Eyes”. Secretly, Ofglen introduces Offred to “Mayday” an underground group of rebellions. Offred is also introduced to Nick, a Guardian, in the Commander’s house as the Commander sends messages to Offred secretly. The Commander invites Offred to play scrabble with him, an illegal activity, and like this they form a relationship. However, a piteous one, as the Commander does this to fill his need of companionship and to make Offred’s life in the house bearable.

In addition, Nick and Offred also develop a small relationship which is further enhanced as Serena asks them both to have sex in order for Offred to become pregnant. Serena is interested in this pregnancy because she desires to raise a child of her own and ensures that this will happen when she promises to show Offred the picture of her daughter, whom Offred now knows is still alive.

Offred also secretly has sex with the Commander as he takes her into a hotel and asks her to pretend to be a prostitute. In this hotel, Offred meets Moira, and learns that she also works in the cheap hotel and in the end she has to submit to the government regardless of her wishes. Hearing this, Offred loses all hopes because she realizes that her living daughter will never recognize her, she has been disloyal to her husband, and her fate will be similar to Moira’s as she will also have to submit to the government.

As all this continues, Offred discovers that Ofglen has been replaced because the previous one was caught in her subversive activities and hanged herself before getting caught. Soon after, a black van, a signature of the “eyes” comes to take Offred away. Nick tells her to go as they are really “Mayday”. After this, her fate remains unknown. We don’t know whether she’s taken to freedom or execution the story finishes with an epilogue.

This is a pretty dense text as we watch offered grappling with extreme misogyny religious extremism and the loss of her daughter and a hideous new outfit were invited to speculate on just how dangerous apathy to the world around us could be and how many of us may take her own freedom for granted.