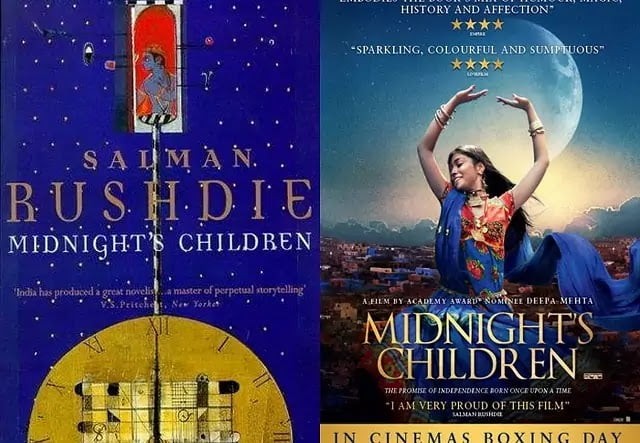 Midnight’s Children is a 1981 book by Salman Rushdie that deals with India’s transition from British colonialism to independence and the partition of British India. It is considered an example of postcolonial literature and magical realism.
Originally published: 1981
Author: Salman Rushdie
Genres: Magic realism
Adaptations: Midnight’s Children (2012)
Publisher: Jonathan Cape
Awards: Man Booker Prize, The Best of the Booker, James Tait Black Memorial Prize – Fiction
About the Book
Salman Rushdie Midnight’s Children is the Mona Lisa of imagery. A text that is as rich in variety and depth as India itself, Rushdie has packed this literary marvel with sights, sounds, smells, and colours that are as diverse as the pantheon of Indian gods. Carrying such heady titles as the 1981 Booker Prize Winner and the Booker of Bookers, this novel bears expectations of literary greatness and then exceeds them.

Ancestry and history collide as you follow Saleem Sinai’s life story. Born at midnight on the night of India’s independence, Saleem is graced with a gift, the power to connect with all the other children of midnight. This group, which he dubs the Midnight’s Children, are all bestowed with their own special capabilities in a country where magic and science have existed alongside one another for centuries.
Saleem is obsessed over his synchronous birth with India and he traces how the past, present, and future of his country are all inter-connected with his family line. The theme of family and how it shapes us is reflected in the connection between all of the Sinai family’s events. Rushdie pulls you along as you trace the misfortunes and successes of the Sinai throughout time, and the sheer depth of these links is aweing. The vivid imagery forces readers to decide for themselves. Is Saleem a madman or a philosopher? A victim of fate or its victor?
Saleem’s own gift for the olfactory senses — he was born with a nose the size of a cucumber — is just as much of a character as he is. Whether it’s his ayah’s mango chutney or the bitterness of his aunt’s jealousy, without Rushdie’s inventive scents
Midnight’s Children would not come alive as it does. A phenomenal read and beautiful story, Midnight’s Children is the chocolate ganache of texts. Rich and decadent, you will want to reread passages again, savour chapters individually, and find that sentences will stick with you for the rest of your day.