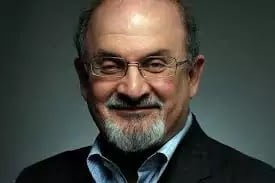 Title of the Composition:  Midnight’s
Children
Author: Salman Rushdie
Type of work: Novel
Genre: Bildungsroman; satire; farce;
magic realism
Language: English
Time and Place Writing: England, late 1970s and early 1980s
Date First Appeared: 1981
Publisher: Penguin
Books (Jonathan Cape)
Narrator: Saleem
Sinai
Point of View: This
novel is narrated in the first person. The narrator is subjective, though he
claims omniscience as he speculates on the motives and thoughts of all the
major characters
Tone: Urgent;
ironic; satirical
Tense: Saleem,
age thirty, generally narrates in the present tense. Most of the events he
describes, however, occur in the past, at which point Saleem switches to the
past tense.
Setting (time):  From 1915 to 1977
Setting (place): India, Pakistan, and Bangladesh
Protagonist: Saleem
Sinai
Major Conflict: The battle between Saleem, who represents creation, and his archrival,
Shiva, who represents destruction, encapsulates the major conflicts of the
novel.
Rising Action: The
birth of Parvati and Shiva’s son, which occurs at the same moment that Prime
Minister Indira Gandhi declares a State of Emergency.
Climax: Shiva
and the army’s destruction of the magicians’ ghetto, where Saleem has been
living with his wife and her son
Falling Action: After his home is destroyed and his wife is killed, Saleem is taken to
the Widow’s hostel, where heand the rest of the midnight’s children are
sterilized.
Themes: The
single and the many; truth of memory and narrative; destruction vs. creation
Motifs: Snakes;
leaking; fragmentation
Symbols: Silver
spittoon; the perforated sheet; knees and nose
Foreshadowing: Ramram’s
prophesy of Saleem’s birth; Saleem’s fever induced dream of the Widow.
Context
Salman
Rushdie was born on June 19, 1947, to an affluent family in Bombay, India.
Rushdie’s birth coincided with a particularly important moment in Indian
history: after nearly one hundred years of colonial rule, the British
occupation of the South Asian subcontinent was coming to an end. Almost exactly
three months after Rushdie’s birth, Pakistan and India achieved their
long-awaited independence when, at the stroke of midnight on August 14 and 15,
respectively, power was transferred from Great Britain to the sovereign
governments of each country. The period that immediately followed independence
proved tumultuous. Political and social tensions between Hindus and Muslims
caused not only the division of India into two separate countries—a calamitous
event referred to as Partition—but also wide-scale riots that claimed hundreds
of thousands of lives. The violence that accompanied independence was a prelude
to the multiple wars, coups, and governmental abuses that plagued the area in
the years that followed.
The political
upheaval and constant threat of violence that marked the first three decades of
independence forms the backdrop for Midnight’s Children,
Rushdie’s most celebrated novel. Like Rushdie himself, Saleem, the narrator of Midnight’s
Children, is born on the eve of independence, and the events of his
life closely parallel events in the development of both India and Pakistan.
Most of Rushdie’s novels concern themselves, to some extent, with the character
and history of these two major South Asian nations and describe the various,
often violent struggles between different religions, classes, languages, and
geographical regions. In the thirty years following independence, India and
Pakistan fought three separate wars: two over Kashmir, and one over the creation
of an independent Bangladesh. The wars produced millions of refugees, claimed
thousands of lives, and led to a nearly permanent state of tension between the
two countries.

Raised in
a well-to-do Muslim household, Rushdie was given an excellent education. After
graduating from the University of Oxford in 1968, he moved briefly to Pakistan,
where his family had immigrated after Partition, before returning to England to
work as an actor and copywriter. Soon after, Rushdie published his first novel,
Grimus (1975). A blend of science and literary fiction, Grimus,
though generally ignored by critics, nonetheless marked the debut of a new
literary talent that incorporated myth, magic, and fantasy into his narratives.
Six years later, Rushdie published Midnight’s Children, which won
the Booker Prize in 1981, and was later deemed the best Booker-winning novel
from the first twenty-five years of the competition, earning the title “Booker
of Bookers.” Heralded by critics as an enormous literary achievement, the novel
instantly earned Rushdie comparison with some of the world’s greatest
contemporary writers. However, Rushdie’s great international fame is mainly
owed to his 1988 novel The Satanic Verses and the controversy
that followed its publication. Muslim religious clerics and politicians deemed The
Satanic Verses sacrilegious and offensive for its harsh, critical
portrayal of Islam and for its less-than-reverent treatment of the Prophet
Mohammed. The novel was banned in Rushdie’s native India and prompted the
theocratic Iranian government to issue a fatwa—a religious ruling—calling for
his death in 1989.
Rushdie
spent the next nine years living in secrecy, under the protection of bodyguards
and the British government. Fearful for his life, Rushdie nonetheless continued
to write and publish books, most notably Haroun and the Sea of Stories
(1990) and the Moor’s Last Sigh (1995), as well as two works of
nonfiction, The Jaguar Smile (1987) and Imaginary Homelands
(1991). When the Iranian government lifted the fatwa in 1998, Rushdie
was able to enjoy a return to a moderately normal life and eventually settled
in New York City.
Rushdie’s
work, and Midnight’s Children in particular, is often associated
with several categories of literary fiction, including magical realism, postcolonial
fiction, and postmodern literature. His work is often compared to, and
admittedly influenced by, novels like Gunter Grass’s Tin Drum and
Gabriel García Márquez’s One Hundred Years of Solitude. Equally
significant as the incorporation of mythical and fantastical elements into his
fiction is Rushdie’s uniquely Indian perspective on the English language.
Rushdie’s novels hum with an eclectic mix of prose styles, which echo the
rhythm and slang of English as it is colloquially spoken in India. Familiar
English words get combined in new and unusual ways, and long, unbroken
sentences run on freely, sometimes spanning a page or more. The inspiration
Rushdie draws from both ancient and contemporary Indian culture is also notable
in his fiction. Elements taken from traditional Indian mythology and religion
thread themselves through the novel, as do the artistic conventions of modern
Bollywood, the vigorous, populist cinema industry based in Bombay. In its sheer
exuberance and sprawling range of cultural sources, as well as its attempt to
include as much of India’s vast cultural identity and contemporary history as
possible, Midnight’s Children is as complete a reflection of the
life and character of the subcontinent as any single novel could possibly provide.
~~~~~*~~~~~