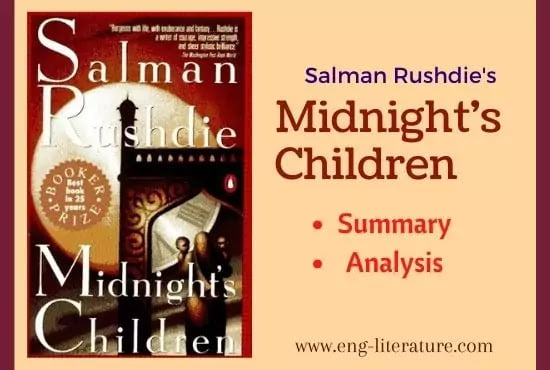 Midnight’s Children (1980) is a masterpiece. It has brought prestigious Booker Award to the author and other prizes also. It has been translated into twelve languages and deals with incidents of Pre and Post independence era of Indian Sub-continent. It covers issues of politics, religion and fanaticism. In an interview with India Today (Sept. 15, 1988) he confesses that religion and fanaticism are his major themes:

“Actually, one of my major themes is religion and fanaticism. I have talked about the Islamic religion because that is what I knew the most about. But the idea about religious faith and the nature of religious experience and also the political implications of religious extremism are applicable with a few variations to just about any religion. In the beginning and the end of the novel there are other kinds of fundamentalism.”

The novel portrays the life and experience of three generations of a Sinai Family, living in Srinagar, Amritsar, Agra, Bombay and Karachi. Saleem Sinai, the central character, works at a pickle factory and narrates the events and his experiences to his wife Padma. The major events narrated by him are Quit India Movement, Cabinet Mission, Muslim League’s activities, riots, Five Years Plan, Pakistan war, liberation of Bangladesh and sacred relic of Hazratbal Mosque.

Rushdie presents almost all the events in such a manner that the history appears to be redrawn. The New York Times writes:

“The literary map of India is about to be redrawn. Midnight’s Children sounds like a continent finding its voice.”

The novelist paints a scene of national movement at Amritsar with the following description:

It is April 7th, 1919, and in Amritsar the Mahatma’s strand design is being distorted. The shops have shut. The railway station is closed, but now rioting mobs are breaking them up. Doctor Aziz, leather bag in hand, is out in the streets, giving help wherever possible. Trampled bodies have been left where they fell. He is bandaging wounds, doubling them liberally with Mercurochrome, which makes them look bloodier than ever, but at least disinfects them. Finally he returns to his hotel room, his clothes soaked in red stains.

“and there are so many stories to tell, too many, such and excess of intertwined lives events miracles peace’s, rumours, so dense a coming being of the improbable and the mundane.”

Saleem Sinai takes on him the responsibility for major historical and political events. The following two examples prove his stance:

“In this way I became directly responsible for triggering off the violence which ended with the partition of state of Bombay as result of which the city became the capital of Maharastra.”

“…what I later became convinced was the truth, that the purpose of that entire (Bangladesh war had been to reunite me with an old life, to bring me back together with my old friends.”

Rushdie admits that Saleem shares his personal experiences but deviates from the fact that Saleem represents his own character:

“As far as autobiography is concerned I said that Saleem and I share certain things, we grew up in the same part of the same city at the same time. But he never really felt to me like a self-portrait…”

The story begins with his putative maternal grandfather, Dr. Aziz who hits nose on the ground while praying and resolves never to “bow down before man or God”, a promise he observes till his death. Aziz’s “first glimpse of his wife is through a perforated sheet erected in front of her which allows him to feel a part of her when he is called on a professional visit. But in the process of wooing, she displays more of her autonomy, though still behind a perforated sheet. His family shifts to Agra where a conjurer’s secretary seeks refuge in their house.

Nadir Khan is also there in the basement who befriends Aziz’s daughter Mumtaz and teaches her to play “hit the spitton” and marries her two years later when Mumtaz’s mother discovers that the marriage is still unconsummated and what both Nadir Khan an Mumtaz have been aiming at is a spitton and not progeny, all hell breaks loose. Major Zulfy, who will play a part in Pakistani coups still in the future, is called to arrest Nadir, but the later manages to elude his pursuer.

Ahmad Sinai who was wooing Mumtaz’s sister, is asked to marry Mumtaz. She changes her name to Amina for Ahmad. Amina and Ahmad became Saleem’s putative parents. In the meantime in the ravages of partition Sinai’s godown is destroyed. This compels Ahmad to give up the leather business and to invest in the real estate in Bombay.

The birth of Saleem takes place at a midnight but a cradle swop derives the Sinai’s of their flesh and blood. Saleem discovers that jolts on the head. Soon he is able to convene a conference of children born at midnight. But his family decision to emigrate to Pakistan banishes him from the conference. It is about this time that Mary Pereira, Saleem’s ayah responsible for the baby shop, confesses her crime.

In Karachi Saleem’s hidden love for his sister, whom he now knows to be of known blood relation, awakens but when he discloses this to her, she rebuffs him. In Karachi, she is fast becoming a national singing idol, wooing her audience through a perforated sheet. The 1965 war brings the roof crashing down on Saleem’s family and he is knocked out cold. When he recovers, he found to have lost his memory.

The events of Bangladesh predominates in the third book of the novel. Every dimension of the story appears different but the form remains intact and the novel proves the artistic excellence of Salman Rushdie. The Bangladesh war takes place. Saleem Sinal by this time is completely a sub-human creature. He is leader of a Canine unit. His extraordinary telepathic powers are replaced. He has forgotten everything about his past, including his name. He is called the Buddha because he has calm and quietness on his facial expression, and also because he appears to be an old man. He does his job sincerely. But he misses his way on the Bay of Bengal and enters into Sundurban delta. A strange and wonderful event takes place. A snake bites him and that kills his forgetfulness instead of him. Soon he realizes his duty and returns to Dacca to find a sea change. Parvati-the witch, recognizes him and takes him back to Delhi in her magic basket.

Saleem is back again to India. But now the scene is that of Delhi and of the slums. The characters like picture-Sing, the most charming man of India, Dhoban. his beloved, Parvati, Saleem and others make that ghetto’ of the magicians. Mrs. Gandhi declares an emergency and everything changes along with it.

The novel is a picture of India with its ups and downs, cultures, films, mythology, politics, religion, marriage ceremony, friendship and enmity. India from Kashmir to Bombay and (from Karachi to Dacca) with its variety of situations and moods is seen in the novel.

“While Midnight’s Children is an important event in Indo-Anglican literature and its expression of radical-democratic humanism is important as an attack on South Asian ruling classes, it could go further ideologically and other issues of South Asian politics are not included.” (New Left Review No 136-87-95)

Rushdie is to be applauded for his ability to invoke India’s many tongued diversity of life and language, plus a ‘suspect’ narrator who provides an engaging element of uncertainty’. Book I and Book II illumine the best of (Bombay, Indo British culture but Book III, while nightmarish, is inadequate to depict modern India’s contradictions” (Encounter 58 (2) 61-66).

Fawzia Afzal Khan feels that the fragmented post colonial reality dictates a fragmented presentation, even a “mish-mash of conflicting genres and forms.” But retreat into myth is not the solution, mythic, realistic and surrealistic modes must ‘defuse’ each other.” (Journal of South Asian Literature, 23, (1) 137-145) On the other hand O.P. Mathur comments that Rushdie slips into “nonsense,” but only to achieve his political exposure in a particularly clear and effective way (The Commonwealth Review, 1(2) 85-93).