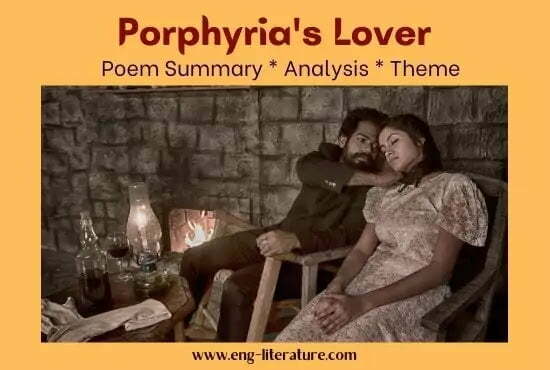 One man shall crawl

Through life surrounded with all stirring things,

Unmoved; and he goes mad; and from the wreck.

Of what he was, by his wild talk alone

You first collect how great a spirit he was.

It is a stormy night. The violent wind tears the tops of elm-trees and ruffles the lake-water. A lover is sitting alone by a burnt-out fire in his cottage waiting anxiously for his ladylove to come to him, when Porphyria steps into the room silently and closes the door to keep the cold and wind out of the cottage. Then she bends down to make the dying fire blaze up. The room gets warm. Then she rises and takes off her wet cloak and shawl and dirtied gloves. She takes off her hat and her long, damp golden hair falls on her shoulder.

Then she sits down by his side and lovingly addresses him. The lover having made no reply, she takes his arm and puts it around her waist. She bares her smooth white shoulder, removes her hair from there, bends forward and makes his cheek rest on her bosom. She then covers his head and shoulder with her golden hair as under a cloak.

Then she tells him in a sweet low voice that she loves him passionately and that she is too weak to free herself from her false family pride and loveless marriage ties and to surrender herself completely to him forever. But that night her passionate love for him gets the better of her pride and wifely duties, and comes to him turning her back upon the revelries in her house and braving the inclement weather.

Porphyria’s lover looks up at her eyes happy and proud. At last his doubts and fears are gone. He is sure she loves him deeply. He feels exulted. He is puffed up with a sense of superiority. While he is thus perched on the height of exultation, he is unable to decide what to do next, when a sudden thought flashes across his mind. Acting on his thought he makes her hair into a long cord, winds it thrice round her throat and strangulates her. He is sure she felt no pain, otherwise she would have cried in pain.

Then he opens her eye-lids. Her blue eyes show no sign of discoloration. He unlooses the knot of her hair round her neck. Then he kisses her cheek passionately. Her check once more blushes brightly under his passionate kiss. He then holds up her head, but now it drops on his shoulder, and he has to bear the burden of her head. Her face seems glad that all its wishes have been fulfilled. The social barriers and marriage ties which forbade her meeting with him and which she despised no longer exist, and he has at last gained her love. But Porphyria could not know that her dearest wish was fulfilled.

Throughout the night they- the dead and the living- sit together without stirring. And God is so stunned by his murderous act that He does not like to speak. In other words, he does not approve of the lover’s act.

One of Browning’s fine lyrics Porphyria’s Lover first appeared in the January 1836 issue of the Monthly Repository. It was afterwards published in Dramatic Lyrics in 1842 under the heading “Madhouse Cells” along with the poem Johannes Agricola in Meditation. In 1863 it was separated and published independently without any abnormal association. The idea of the poem is supposed to have been suggested by the madness of the poet Christopher Smart. This supposition is however untenable, because the poem concerns not a madman but a cold blooded murderer.

Porphyria’s Lover is a love poem. But it is primarily intellectual and has very little emotion that characterizes a love poem. The matter-of-fact way the lover describes his crime brings out the intellectual quality starkly. He attempts to seek justification in a logic that smacks of intellect:

“So glad it has its utmost will,

That all it scorned at once is fled,

And I, its love, am gained instead.”

But though the intellectual element is powerful in the poem it has no small element of sensuousness so characteristic of a love poem. The manner Porphyria draws her lover into physical intimacy is boldly sensuous. Her act of putting his arm about her waist, baring her smooth white shoulder, making him lie his cheek on her bosom, spreading her long yellow hair over his head and shoulder, and the lover’s kissing her passionately “once more” on the blushing cheek are conspicuous for its sensuousness. The description of Porphyria’s lover resting his check on her bare, soft white bosom reminds us of Keats’s:

To feel for ever its soft fall and swell.”

Porphyria’s Lover is a dramatic monologue, a form in which Browning excels. The poet catches Porphyria’s lover at a highly special moment of his life the moment when he is sitting with the dead body of his beloved strangled by himself, and lays bare, through his own utterances, the history of his soul-his doubts and uncertainties about Porphyria’s love, the supreme joy he has when Porphyria was “mine, mine, fair,” his reactions to her complete surrender to him (“surprise made my heart swell/and still it grew”), his jealous, murderous nature which leads him to kill his lover mercilessly by throttling her with her long hair made into a knot, and above all, his hardheartedness which forbids him feeling repentance for his inhuman homicide. The pressure of the moment forces him to confess what he would fain to conceal in normal times. Thus the lover reveals that he had physical contact with Porphyria before

“her cheek once more

Blushed bright beneath my burning kiss.”

It is incorrect to say that there is no listener in Porphyria’s Lover. Porphyria’s Lover story is addressed to a silent listener, perhaps a visitor, as is evident in the line, “Be sure I looked up at her eyes.” or “And thus we sit together now.”

Like typical dramatic monologues of Browning Porphyria’s Lover possesses some dramatic elements. Instead of external action as in the drama, we sense the speaker’s various moods as if these were actions within the character himself.

The poem is predominantly psychological like Browning’s most poems. The first few lines probe the turbulent state of the lover’s mind and his nervous irritation. The lines “Be sure I looked up at her eyes/Happy and proud” reveal Browning as a psychologist of all psychologists. When the lover has the physical intimacy with Porphyria, all his doubts and fears melt away and he feels happy and proud. In real life too the uncertainties and fears of a lover evaporate when he enjoys the company of his love, such as Porphyria’s lover does.

Browning explores the mental conflict of the lover in the line, “While I debated what to do.” The lover is in a state of “to be or not to be“. He is unable to decide whether he should let the moment of the rich fulfillment of his long-cherished love go and allow himself to be swayed again by doubts and fears or he should make this happy moment an eternity (i.e. he should make the instant eternity). Porphyria’s mind was also torn asunder by the conflict whether or not she should turn her back upon social pride and marriage obligations and surrender herself to her lover, body and soul.

The style of the poem is simple, lucid and direct. It has none of the obscurity which mars most of Browning’s poems. There are lines in the poem which are conspicuous for their felicities of expression and suggestiveness. Take the lines,

“As a shut bud that holds a bee,

I warily opened her lids…”

The bee-image is not only felicitous but also poetic. It suggests the lover’s fear that his murderous deed will bring on him the death-punishment.

Both the lovers want to preserve the moment of pure and stigma-free love for ever. Out of insanity the lover strangles her beloved, Porphyria to death thematically suggests the universalizing and dominating passion of love.

Murder is a sin by any means. The lover commits cold-blooded crime by performing the murderous design. Also vanity that the beloved harbours  so long in her mind is a sin.

In the second half of the poem, Browning offers more and more clues to show that the speaker is not merely delusional or confused because of his near-broken heart but that he is somehow quite mad. All this is presented, in a calm manner, even as the speaker describes how he takes his lover’s hair and twists it around her neck until she is dead. By not using disjointed language or crazy rhyme (the rhyme scheme is rather irregular but follows a very orderly pattern), Browning suggests that madness is a complex phenomenon that has more in common with sanity than we think.

“Porphyria’s Lover,” while natural in its language, does not use the colloquialisms of some of Browning’s later poems.

While the flow of the poem mimics natural speech, it actually takes the form of highly patterned verse, rhyming ABABB.

The strict rhyme scheme suggests that the speech may not be as natural as it first appears and there may be some madness within the lines!