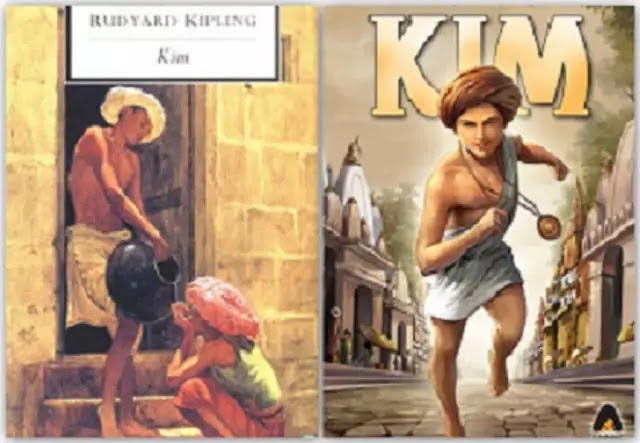 Kim is a novel by Nobel Prize-winning English author Rudyard Kipling. It was first published serially in McClure’s Magazine from December 1900 to October 1901 as well as in Cassell’s Magazine from .

Kim , 13, a lonely, British orphan boy, born in India, his widowed father, was in Queen Victoria’s army, but he died, a hopeless, pathetic, drunk. Kim’s full name is Kimball O’Hara, the poorest of the poor, who lives mostly, in the slum streets of Lahore, the Punjab (now part of Pakistan). Sometimes the child, stays with an old Indian woman, addicted to opium, naturally, he prefers the outside, begging for money, trying to stay alive and surviving, day to day… Later meeting a strange Lama, from faraway Tibet, while playing with his friends, in front of a museum, the monk is seeking information, about “The River of The Arrow”, legend has it, that Buddha himself, shot an arrow in the sky, and when it landed, a river appeared miraculously.

Anyone who bathes in the water, will have all his sins removed, and become pure again, the problem, nobody knows where this stream, is located. Kim decides impulsively, to follow Teshoo Lama, the monk in the “Search”, becomes his disciple, in reality. Wanting to have fun, and exciting adventures., also, Kim is tired of the city. But first his friend, the mysterious Afghan horse trader, Mahbub Ali, who works for the British, as a secret agent. Has a message for Kim, to deliverer ( a dangerous mission) to Colonel Creighton, head of the British spy agency and get well paid too. War will occur in the north, as it always does, here, instigated by the Russians. Traveling by train, they encounter a colorful group of people, inside, all India goes in them, Kim begins to love the mad monk and the old man, likewise (the father he needs, the son he lacks) .

Still the road, is endless, the odd pair, are not successful, in finding the river, tired and discouraged… Then the two encounter, Kim’s father’s, old regiment, by accident, the boy, against his will, is detained and made to attend, a British school. After three long years, the kid learns to read and write, in English, grows to enjoy learning, but never forgetting the monk.. Given six months, to go with his friend, and resume their impossible, strange, quest. The lama had visited numerous, Buddhist shrines, waiting for Kim, many unlikely incidents happen, on the road, even arriving near, the mighty Himalayas. Greatly helped by a rich, cantankerous, kindly woman, the Sahiba, as they go and see this unique land, spies are everywhere here, unknown dangers, but the real story of this book, is India… As Kim asks… who is Kim? Buddhist, Catholic, Protestant, Jains, Sikh, Muslim, Hindu, British or Indian. That question can be answered very easily, Kim is now a man, who loves India….You will too , if you read this novel.