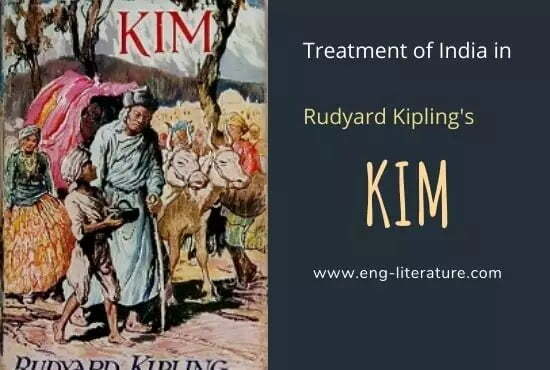 India occupies a central position in Kipling’s writings. India has a special place in his heart as he had spent his impressionable years of childhood and formative years of his young age in India. Therefore the main character in his works is India. He had witnessed India nakedly with all her beauty, power, truth, and vices. Kipling possessed insatiable curiosity, minute power of observation and photographic memory.

Rudyard’s father Lockwood Kipling was the Principal of the School of Art in Bombay and young Rudyard learnt a lot about India from his father. Even Rudyard’s father Lockwood Kipling was not free from prejudices that we usually find in white man’s attitude. In his book `Beast and Man in India’ he makes many observations that smack of white man’s prejudices against India.

As a young journalist, Kipling unveiled Indian realities. He treated India as “Seven Years’ Hard.” Kipling’s portrayal of Indian people and politics of India are essentially prejudiced. His portrayal of the British is also the same as the views of imperialist. He believed that the British rule has a utility as it helped in maintaining law and order. He seems to hold like Churchill that India without the Britishers would not have been able to escape bandits, massacre, flood, famine and plague.

Kim can be considered Kipling’s classic on India. Nirad Chaudhari argued over Kim as ‘the finest novel in the English language with an Indian theme, but also one of the greatest novels in spite of the theme.’ The novel was written after 1889, the very year he had left India. Here we find more balanced, matured and unprejudiced image of India. Kim bears a story of a 14 year old Irish orphan reared by a Eurasian woman and Teshoo Lama, the holy man from Tibet. Kim searches for a great Red Bull on a Green field, while the Lama is looking for a river that washes away all sins. Kim got the nickname as the ‘Little Friend of all the world.’ Kim regards the Lama as his Guru. They travel together to the Himalayas. Kipling for the first time admits that pride and racial superiority must be shunned if one wants to know the soul of India.

The Lama is always high in meditative mood caring a fig about the life around him. Apparently Kim is pretty excited to see the broad smiling river of life. He finds new people and new sights everywhere. Kipling succeeds amply in describing people of various walks of life very graphically. Kim enjoys all these spectacles but the Lama never raises his eyes. He says that all these people are bound to the wheel of life.

When they come across a snake, Kim reacted like an average Westerner. He wants to pick up a stick and kill it like D.H. Lawrence in his poem ‘Snake.’ But Lama forbids him telling Kim that like all other creatures on earth, the snake is also bound upon the wheel of life. He says “Let him live out his life.” He addresses the snake as brother and wishes him the earliest release from the bondage of life. Kim’s reaction is typically Western while that of the Lama Buddhist. Kim belongs to the world of action but he acknowledges the value of meditation and compassion.

Kim’s search comes to an end with his sighting the device of the Mavericks, the Great Red Bull on the background of Irish Green. He is caught by Father Bennet and his parentage is established. Kipling seems to have no sympathy with the missionaries as he calls them Church of England. His sympathy is with the Lama whom Father Victor calls ‘a street beggar’.

Just when one search ends for Kim, another search begins. His parentage is established but he wants to search for his identity. He has been constantly tearing apart between “antithetical demands of East and West”. There is a conflict between his genes and environment. Kim is sent to St. Xavier’s to be trained as a Chairman for the Survey of India. When Mahbub Ali informs him, “once a Sahib, always a sahib”, he replies, “I don’t want to be a Sahib”. He wants to remain just Kim. Kim studies at St. Xavier’s but never forgets the simple, austere of life in the Himalayas.

At the end of the novel Kim realizes that the Lama’s path of renunciation is not for him. But Lama has clarified to him on the prejudice of colour-discrimination as he tells him “there is neither black nor white”. As Kim’s search ends, so does the search of the Lama. He gives up food and water, sits in meditation for two days and two nights. On second night, Lama informs Kim that his soul is free.

According to Angus Wilson,

“Kipling has established for the reader — and established with considerable dramatic effect — the contrast between the East, with its mysticism and sensuality.”

In Kim, we discover almost a complete change in Kipling’s attitude towards India. Here he does not aim at contrasting the East and the West and label the superiority of the West but he aims at the synthesis of the worldly and the saintly. He dwells on India with tenderness, nostalgia and profound understanding. Kim would certainly be called to be a prose Odyssey of Hindustan.