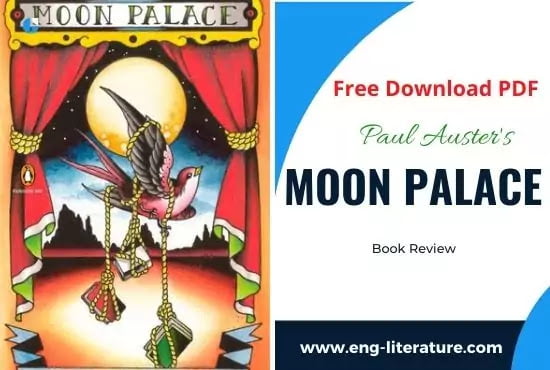 Born in New Jersey, USA, Paul Auster is a popular postmodern novelist and earns numerous awards and prestige for his The New York Trilogy, The Book of Illusions, Sunset Park, Invisible, 4 3 2 1, Winter Journal, Travels in the Scriptorium, Oracle Night,  I Thought My Father Was God, The Brooklyn Follies.

Paul Auster’s Moon Palace is the story of Marco Fogg, an orphan who falls on hard times and then ends up working for a man who turns out to be both a famous painter and his grandfather. Marco is the narrator of the story as he starts writing down this story 20 years after some of the events have taken place.

Marco tells us about his family – his mother died when he was a boy. He never had a father, his uncle Victor raised him.

Marco Stanley Fogg inherits thousands of books from his uncle Victor , with whom he grew up. With these books he furnishes his apartment . He has to sell book for book to finance his living . After the last of the books has gone he is made homeless, lives in Central Park for months, survives on leftovers from picnics. He is in a severe mental crisis – he is no longer able to make decisions about his life!

Being seriously ill his old friend Zimmer from his university days and a young Chinese woman, Kitty Wu, with whom he had fallen in love months ago, find him. Zimmer had lived with Marco for a while and encouraged him to date Kitty. With her help he recovers and accepts a job as the person in charge for the blind and paralyzed Thomas Effing.

Fogg’s main job is to write the story of Mr. Effing’s life. Effing left his wife and his son to embark on an expedition along the western frontier as landscape painter. He survived an assassination attempt in the desert and settled as hermit in a cave formerly occupied by robbers where he stays for more than a year. Because his family had pronounced him dead, he could fabricate new identity after his return . He was not interested in his family any longer.

After long journeys across Europe, he had an accident that caused a paralization of his legs so that he had to retire in his New York City apartment. Shortly after the completion of his biography, Mr. Effing dies and Fogg finds his still alive son Solomon Barber to hand the notes over to him. It turns out that Barber is Fogg’s father.

They try to find the cave mentioned in Effing’s biography because they want to recover some lost paintings that are supposedly in the cave. During the expedition Barber is killed in an accident and Fogg who was left by Kitty Wu because they fell out with each other after Kitty had an abortion. The inner stability which Marco had gained by finding his father seems to have been lost.

He undertakes a journey on foot across the continent to find himself again. By the process of walking he finally manages to overcome his old identity and starts a life as a new person.