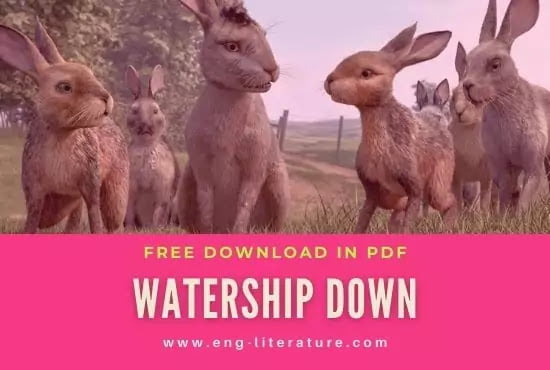 Watership Down (1972) is one of the finest allegorical fantasy-adventure novel by English writer Richard Adams. Set in the rural south of England, it follows a cohort of anthropomorphic rabbits who have created their own mythology and culture to make sense of the world around them. The novelist gives them the voices, morals, and stories of people. They have a government, culture, language, mythology, etc.

The novel borrows the classic structure of the epic, tracing the rabbits’ perilous voyage out of their ruined warren to seek a new home. The novel won several awards, including the Carnegie Medal, and was adapted to a 1978 animated film and a 1999 television series.

The very opening of the novel takes place in the rabbits’ home, the Sandleford warren. A young rabbit named Fiver receives a prophetic vision of the demolition of their warren and relates it to his brother, Hazel. Fiver and Hazel try, to no avail, to convince the chief rabbit that they have to escape. The brothers resolve to set off with a band of nine other rabbits from the warren who believes Fiver’s vision. Immediately, they are under threat by the warren’s guards, the Owsla, whom they must evade in order to escape.

At the point when they get away from the warren, the group of eleven rabbits selects Hazel as the de facto leader. Until this point, he has never led anything. The rabbits trek through the dangerous country seeking a new home. Silver and Bigwig, the two biggest rabbits, are former members of the Owsla, so they act as the group’s guards, helped by Hazel’s cleverness and judgment. Soon they meet a lone rabbit named Cowslip. Cowslip tells them that they are welcome in his warren.

In spite of the fact that the bunnies are at first thrilled to have discovered another home, Fiver senses an ominous fate in this warren. Bigwig is trapped in a snare and almost dies, whereupon the rabbits realize that Cowslip’s warren belongs to a farmer, who keeps them alive and well fed in order to kill them for meat and furs. They were welcomed into the warren only to dilute its current population, increasing the residents’ average chance of survival. The group rescues Bigwig from the snare and escapes with a new member, Strawberry, whose female partner was killed in a similar snare.

Fiver has a clear vision that they are approaching a safe place for residing. They come upon Watership Down, which looks exactly like the place in his vision. They encounter Bluebell and Holly, two surviving members of the Owsla. Both are severely wounded, having sustained injuries from a group of humans who destroyed their home warren, and further violence at Cowslip’s warren. Holly admits that he attempted to stop the emigration on the first night after Fiver’s vision, and apologizes. He now believes the veracity of Fiver’s visions and pledges his support.

Watership Down is idyllic, with the exception that there are no females. This feature seemingly condemns it to a future where the population dwindles to nothing. Hazel’s group meets Kehaar, a black-headed seagull who finds a nearby warren for them called Efrafa, which is overpopulated with both males and females. Hazel decides to send an envoy to request females and appoints Holly the leader. Simultaneously, Hazel and Pipkin launch a rescue mission at the nearby Nuthanger Farm, rescuing three rabbits, two of them does. Holly returns and tells them that Efrafa is a fascist rabbit warren led by a rabbit who calls himself General Woundwort. Holly’s team located Hyzenthlay, a rebel who wants to assemble a group of rabbits to escape. Bigwig and Hazel plan to help her.

Their plans are hindered by a sudden attack on Watership Down led by Efrafa’s Owsla and General Woundwort. Bigwig and Hazel release the watchdog at Nuthanger Farm, who critically wounds him before he vanishes. Hazel nearly dies from a cat attack, but is rescued by Lucy, a girl who lives on the farm. The story’s epilogue takes place several years later. Hazel is visited by the rabbits’ mythical hero, El-ahrairah, who asks him to join his Owsla in the spirit realm. Confident about the future of his warren, Hazel leaves Watership Down to join the mythical world.

Depicting the epic tale of a group of anthropomorphized animals as an allegorical frame for the human struggle to build and nurture society in an often bleak and hostile world, Watership Down allows its audience to emotionally relate to its rabbit protagonists. In the process, the novel invites meditation on our own contingent relationships to the natural world.