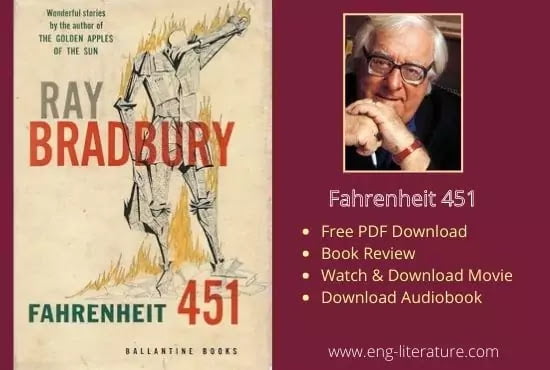 The graphic novel Fahrenheit 451 is regarded Ray Bradbury’s tour de force. The society that he depicted in the novel is so far alienated from the one we live in today. At the same time, they are so similar.

At the outset, the novel was intended to be made a short story called The Fireman. However, later on, Ray Bradbury developed this short story into a book called Fahrenheit 451. It is a dystopian novel, which in the literary terminology means an imaginary civilization or state in which happiness is unattainable. The readers after reading this novel feel, it is unattainable in the society Ray Bradbury created.

To portray a dystopian society, writers portray a caricature to their one in the future. It’s in the case of Fahrenheit 451. They emphasize the negative traits of the society they live in, trying to predict what will happen in the future. Ray Bradbury was one of the first writers who used science fiction for social criticism.

Fahrenheit 451 is a graphic novel set in a country similar to the USA in the twenty-fourth century. The government, which Ray Bradbury describes, is a form of despotism. It tries to cover itself with the help of digital media and overdeveloped television. In this world of constant entertainment, the government banned all the books. Even possession of anything written is a serious crime. The main character of the novel is a “fireman” called Guy Montag. His job is to destroy books and the collective knowledge recorded in them.

In the world depicted by Ray Bradbury, “the fireman” is no longer serving society or acts heroically. He has to burn books and to destroy knowledge. Therefore, the title of the book “Fahrenheit 451” refers to the temperature at which paper sets on fire.

The novel has an ideal character named Clarisse McClellan. She represents everything good in this world. She is smart, passionate, and she is not satisfied with superficial knowledge. Somehow she did not lose the ability to think freely. She plays the role of a foil for Guy Montag. He is the most typical person, and there is nothing extraordinary about him. Even the fact that Ray Bradbury named him “guy” proves his mediocracy. He does his job well and does not ask any questions. He is the product of his environment.

Instead of saving people, he burns books. He is married but finds himself in love with Clarisse. Guy Montag does not have the word “love” in his vocabulary, nor does he understand what it is. He always thought that romantic love was a human invention. However, Clarisse invokes true feelings of love in him. He starts speaking romantically about her, “Her face, turned to him now, was a fragile milk crystal with a soft and constant light in it.” The warmness of Clarisse is juxtaposed with the coldness of Mildred, his wife.

Mildred is an abnormality even in the world we live in today. She spends most of her time watching television walls. Ignoring the problems and the world around her, the woman is only worried about the program schedule. However, even with constant entertainment and medication, the fact that she is unhappy cannot be concealed. At the beginning of the book, Mildren attempts to commit suicide.

Another peculiar character in the book is Captain Beatty, Montag’s superior. He is the only character in the novel that has extensive knowledge of the past. Yet, he doesn’t know how to use it (or chooses not to use it). He visits Montag and tells him about books and its censorship. He also says that if a firefighter is caught having a book in his house, he will be obliged to burn it in 24 hours. If he refuses, then the other firemen will burn his house down.

Over the years, Montag was hiding books in his house. However, he never dared to read them. When Mildred learns that Montag was secretly bringing books into their home, she wants to destroy them. Montag tells her that they will read them together, and see if the books have any value.

Throughout the novel, Montag goes through what we would call a slow conscious awareness. He starts as a dedicated fireman, goes into the process of doubts. In the end, he rebels against the system.

Fahrenheit 451 is a 1950’s prediction of the way the future will be. What we see today corresponds with the world created by Ray Bradbury. People became addicted to social media, to their devices, to TV. Everyone is growing tolerance to violence and murder. The dystopian society illustrated in the novel can serve as an eye-opener for the current one. It also can serve as a reminder that life is fast, and happiness is not always easy to attain.