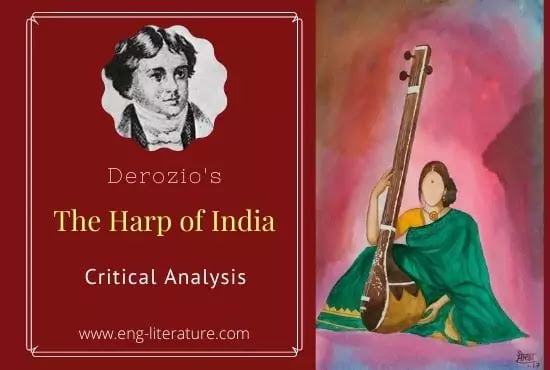 The Harp of India by Derozio

“The Harp of India” is a well-known patriotic poem by Derozio who is known as the first Indian poet in English. It is in the form of a Shakespearean sonnet which has three quatrains and a couplet at the end of the poem. It deals with the pathetic plight of the people of India who were under the clutches of the cruel and callous administration of the British rule.

It is a poem written at the time when the poets never expressed their patriotic views in a direct way. Perhaps this is why the poem, right from the beginning, up to the end, tacitly airs the views of patriotism through the medium of some beautiful metaphors and connotations.

The poem begins with the metaphor of a withered flower on a withered bough. The poet imagines the wretched and miserable condition of India to a withered bough. The reason is obvious. Our country has a rich past. In the Vedic period and onwards, India was an evergreen flower blooming and blossoming on an ever-green bough. But during the British rule, people had to lead a life of slavery even worse than beast. So, here the metaphor is very apt and suggestive.

It has a very fine correspondence between the major and the minor terms. But one thing in this metaphor is very remarkable. The poet mentions only one bough of the tree which is withered. By this connotation he seems to say that the people of India are slave to the British rule only physically, not spiritually, only the bough is withered, not the root and stem. The soil beneath the root (the age-old culture and civilization) is still fertile and nourishing.

The first two lines also contain a very beautiful use of personification. The nation has been personified as a
withered bough. The poet says:

“Why hang’st thou lonely on yon withered bough?

Unstrung for ever, must thou there remain;”

The other powerful and suggestive image of this poem is the image of music. The poet says that the music of India was once very sweet and melodious. But due to slavery nobody dares to hear this awakening music. Silence has bound the whole country with her fatal chain. And so the people of the country are neglected, mute and desolate:

“Silence hath bound the with her fatal chain;

Neglected, mute and desolate art thou.

Here in these lines silence has been personified as a lady who is chained. The words, ‘neglected’, ‘mute’ and ‘desolate’ very well show the exact picture of the miserable condition of the then society where men have to keep mum for the fear of the British rule. The symbol of ‘ruined monument’ and ‘desert plain’ is also very interesting and worth noticing. ‘The ruined monument’ symbolizes the lost glory and grandeur of the nation. Our past was very grand and golden like a great monument. But unfortunately by the blows of the British rule it became ruined.

The phrase ‘desert plain’ is the imagistic variation upon the word ‘ruined monument’. The sound of these phrases is also cacophonic which very aptly suggests the sense. It reminds us of Tagore’s “dreary desert sand of dead habits”. It is interesting to note that the poet in his other similar poem, “My Native Land“, develops the same idea through some other suggestive images:

“The eagle’s pinion is chained down at last.

And grovelling in the lowly dust art thou

The ministrel hath no wreath to weave for thee.”

Well, in the third quatrain of this sonnet, Derozio says that several men before him have played the music of the harp and in return the harmonious chords of the harp have produced sweetness.

He further observes that fame has also garlanded many a wreath for the nation. The flowers on the grave of the minstrels of the nation are still blooming. Here the term ‘minstrel’ suggests the men of honour and fame who kept on playing the harp of India in order to produce harmonious music of eternal value. They are now no more.

The word ‘grave’ is an example of the figure metonymy which suggests here the death of such great personalities. Though they are no longer in existence but the flowers of their concerted efforts for improving the wretched condition of India are still blooming on their grave. So through these beautiful uses of connotation the poet is successful in infusing both feeling and form together. Here the use of the extended metaphors of both the harp and the flower are very appreciating and interesting.

The poet in this poem has tried his best to make a fine relation between the past and the present, between the tradition and the modernity. He wants to describe the present with the help of the past. It reminds us of the famous observation of T.S. Eliot who says that past is altered by the present as much as the present is directed by the past

At the end of the poem, the poet is of the opinion that the music of the harp is eternal. It can never be destroyed. He asks the permission of the harp so that he may strike the strain of the harp for creating a revolutionary music to arouse the people in general. He observes:

“May be by mortal wakened once again

Harp of my country, let me strike the strain.”

Here this image of Derozio reminds us of P B Shelley’s well known poem, “Ode to the West Wind” in which the poet prays the West wind to make him his lyre so that the music produced by the lyre may be able to awake the revolutionary attitude of the people.

“Make me thy lyre even as the forest is

What is my leaves are falling like its own

The tumult of thy mighty harmonies

To sum up, the poem has been masterly rendered through the medium of symbols and images. We know that the heart of the poem lies in its apt use of symbolism. Aristotle also thinks that only that poet may be called a great poet who has a balanced command over metaphor. About Shakespeare it is said that to him metaphor is not the dress of thought but the thought itself. It can also be well applied to the poems of Derozio who was really a great champion of life and beauty, art and truth.